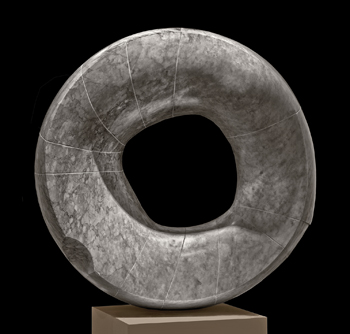 In “Isamu Noguchi, Archaic/Modern,” viewers are met with whimsical, surprising sculptures that wrestle with ideas as epic as space and time.

Noguchi — who was born in 1904 and died in 1988 — was an innovative artist whose work is often looked at through the lens of how he traversed concepts of East and West. But a recently opened exhibition instead focuses on the way Noguchi fused his deep interest in past cultures with his thoughts on the future, a collision that yields a fascinating display of sculpture to navigate at the Smithsonian American Art Museum.

The museum has the largest collection of American sculpture in the world and Noguchi is one of the major American sculptors with an international reputation, curator of sculpture Karen Lemmey noted. “Yet we only had one work by him in the collection,” she said. Noguchi gave “Grey Sun” to the collection in 1967, and the piece is undeniably a highlight of the show.

The museum partnered with the Noguchi Museum in New York for this exhibition, which seeks to “present Noguchi beyond the narrative that has become rather familiar of him as a biracial artist and a man with a foot in the East and the West,” Lemmey said. Here, the curators sought to explore other dichotomies related to the artist.

“‘Archaic/Modern’ emerged quite early on,” Lemmey said, referring to his melding of past and present. For instance, the influence of ancient structures — such as the Egyptian pyramids, Buddhist temples and American Indian burial grounds — can seen throughout his primordial, abstract sculptures. Yet his works were also ahead of their time, including 1947’s “Sculpture to Be Seen from Mars,” which presages the space age by several decades.

By the time he hit the middle of his career, Noguchi had lived, worked and traveled in so many places that he was “really a global contemporary before we have the term,” Lemmey said. He was born in Los Angeles and raised in Japan before coming back to the U.S. to attend high school in the Midwest, and he traveled widely as an adult.

“There’s this kind of accretion, identity by accretion,” she said. “Every place he goes, he absorbs something else and also broadly sources from the world over. He’s just pulling it all together into his unique vision, and so much of what he’s looking at is the future.”

The exhibition is home to what may very well be the calmest corner of Washington, D.C., with “The Well,” a basalt and water fountain sculpture, offering a meditative moment for visitors. As water cascades down the stone, creating lines and shadows, it invites reflection on the natural elements, Japanese stonework and modernism — or just a minute of simple, tranquil appreciation. It’s an exquisite, lovely piece.

There are plenty of surprises here, with blocks of granite and marble cut out to make staircases or slides and a flat piece of aluminum meant to represent a cloud. The exhibition itself is refreshingly free of captions, which seems to encourage a more immersive approach for museumgoers as they navigate artworks that dot the floor and walls.

Noguchi sought to bring together the past and the present by making art that he called “ever new and ever old,” and the pieces on view show he lived up to his adage with elements that evoke ancient art and architecture while embracing forward-thinking modernism. His interest in science, particularly the atomic age and space, is also a major focus within this show. Here a highlight is “Red Lunar Fist,” which is both an electric wall lamp and a bioluminescent chunk of crystal-bearing cave rock — and a perfect example of Noguchi’s playful but stark vision of the future.

During his six-decade career, Noguchi did not just focus on sculpting, but on inventing, too. He thought the separation between art and design, in perception and practice, was ridiculous, the curators note. The show makes a point of drawing attention to his patented designs, from a baby monitor to his Akari lanterns, electrified variations of Japanese craft lanterns. Lemmey noted that the U.S. Patent and Trademark Office offered a great deal of support for this part of the exhibition, which showcases his impressive accomplishments as an innovator.

Another way his designs did not stay static was through the theater. Dancer Martha Graham first wore his piece “Spider Dress” as she danced on his sculpture “Serpent” in 1946. On March 3 at 7 p.m., the Martha Graham Dance Company will perform that one-act ballet, “Cave of the Heart,” in the museum’s McEvoy Auditorium.

“Noguchi and Martha Graham were kind of creative soul mates in a way,” Lemmey said. “They were friends for 40 years, and she often called upon him to design costumes and sets for her dance company. She was very ahead of her time, and so was he.

“The collaboration of Noguchi and Graham lives on in these live performances,” Lemmey added. “And when else does a sculpture curator get to make one of their sculptures dance?”

Throughout his career, Noguchi took on big subjects — space, time, creation — and it is remarkable that an exhibition exploring all of those elements leaves visitors feeling so serene.