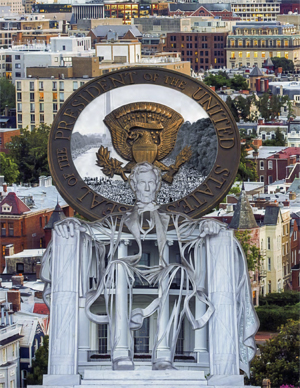 Canadian fashion photographer Maxwell Burnstein turned his attention to politics in “Cross the Party Line,” which uses his signature handmade collage technique to blend landscapes of D.C. with presidential figures.

Fashion and politics don’t seem like natural bedfellows, but Canadian artist Maxwell Burnstein is making the leap from skimpy runway dresses to weighty historical commentary in “Cross the Party Line,” a photography show on display at the W hotel to coincide with the inauguration.

In so doing, Burnstein — who has been hailed as “the fashion industry’s latest creative darling” by the Globe and Mail — is offering an outsider’s take on the politically charged themes that have divided the U.S. since Donald Trump’s election.

“Canadians, through our media, absorb the popular culture and political tensions that have come to proliferate the American climate,” Burnstein told The Diplomat. “As the northern neighbor to the United States, we feel the impact alongside Americans, despite feeling like the outsiders looking in.”

At only 25 years old, Burnstein designed the cover of Elle Mexico’s spring collections issue. Using an exacto knife, glue and tape, the Toronto-based mixed media artist intertwined red-and-blue-striped snakes with the image of a model wearing designs from Gucci’s spring-summer 2016 line. The multilayered composition is a refreshing change of pace from conventional fashion magazine covers featuring a posed model.

The result is a striking fusion of quintessential D.C. backdrops with iconic personalities ranging from Theodore Roosevelt to Richard Nixon (shaking hands with Elvis) to a pensive Barack Obama overlooking the Washington Monument lined with people.

Given the polarization that the 2016 presidential campaign inspired, some artists have shied away from commenting on Trump’s controversial victory — let alone creating an entire show around it. Burnstein, however, said he was moved to offer “an unbiased perspective of the current dialogue,” as he called it. “The exhibit, in partnership with the W Washington D.C., is about showing a bipartisan view on America’s presidential history,” he said. “Canadians have strong social, economic and political ties to America so while I’m an outsider, I’m also an active participant.”

Burnstein stressed that it’s important to emphasize unity over division during this critical juncture in U.S. history. “I’m not one to shy away from making that statement,” he added.

Burnstein said he has always been drawn to fashion, seeing it as a way to define and express himself when he was younger. He attended Ryerson University, home to one of Canada’s top fashion programs. “I was able to acquire a diverse skillset and in turn pursue a path in the industry,” he said.

Among his inspirations, he counts Scottish collage artist Portis Wasp, who often sets beefy, bare-chested male fashion models against animated backdrops peppered with Disney characters from films such as “The Little Mermaid.” Burnstein also called Demna Gvasalia, a Georgian designer in charge of the Balenciaga fashion house, “the most important figure in the world of fashion today.”

While Burnstein’s background lies in fashion not politics, his focus on innovative art fits well with the swanky W hotel brand and its Beaux Arts lobby.

“We are thrilled to welcome Maxwell to W Washington D.C. as an extension of W’s artist-in-residence program,” said the hotel’s general manager, Meade Atkeson. “As the hotel closest to the White House, W is no stranger to being at the center of the city’s political conversation, and with the cutting-edge, contemporary lens we approach art, we couldn’t imagine a better fit than Maxwell to bring these two elements together and we couldn’t imagine a better time than during inauguration.”