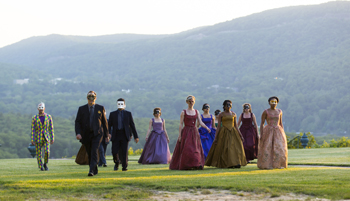 Shakespeare fans can look forward to a fun but meaningful romp in the forest with “As You Like It,” one of the Bard’s most beloved comedies, at the Folger Theatre.

The tale weaves together a complex political theme, love story and, of course, mistaken identity, couched in poetic language as only the Bard can do, with Folger’s expected finesse.

The Folger Theatre’s “As You Like It” weaves together a complex tale of politics, love and mistaken identity, couched in Shakespeare’s poetic mastery of the English language.

A quickie refresher: Rosalind is banished from the court by her uncle, Frederick, who has usurped the Duchy and exiled his older brother, Duke Senior. Rosalind, the Duke Senior’s daughter, flees with her cousin, Celia, to the Forest of Arden. There she discovers and explores young love with the charmer, Orlando, while disguised as a man. Meanwhile, the exiled Duke Senior also retreats to the forest where he lives with some of his supporters.

“This play works on many different levels,” director Gaye Taylor Upchurch told The Washington Diplomat. “On a political level, we’ve made the court a fascist-type place where art and culture have been replaced with wrestling matches and courtly dances, which amount to vain pomp.

“Duke Frederick is narcissistic and demanding of praise and performances from his subjects, which is in great contrast to life in the forest with Duke Senior,” Upchurch said. “I’ve turned the place of the court into New Orleans — a city of great art and culture that also has corruption in its ranks.”

Upchurch stressed that although the play is set in a contemporary time period, “it’s not cellphone contemporary and the characters are not speaking in southern dialect. It’s more of an aesthetic idea.”

Lindsay Alexandra Carter, who plays Rosalind, says that despite being set in the southern United States, the play is “classic in nature and true to its text.”

“Gaye finds a way to make all the scenes intimate, while maintaining the comedic elements, but it comes from a truthful place,” Carter said. “For example, the use of language is so strong that Gaye lets the actors rely solely on the words for their meaning. Touchstone, the fool, is a complicated character to play, since his language is so dense and his jokes so archaic, that many actors layer on physical comedy to compensate for the audience possibly not understanding the text. Our Touchstone, played by Aaron Krohn, makes us laugh with just the text. Gaye doesn’t layer on top of the language to make it funnier than it was written to be.”

This production features original songs composed by Heather Christian, who fleshes out the southern theme with gospel, blues and folk songs, Upchurch said.

“This works out perfectly as the foresters sing the blues to get through the unforgiving, hungry winter,” she said.

The play also ties into present-day issues such as refugees and immigration.

“For the past 400 years, this play has been thought of as a refugee play, since the foresters that gather have left their homeland and are no longer living with the reigning government,” Upchurch said.

“These are great questions to ask ourselves now, given what’s going on all over the world,” Upchurch said.

At the same time, the love story between Rosalind and Orlando is equally as complex and meaningful, she said.

“Rosalind and Orlando each end up as they do because of relationships they have in the community. The play explores love from many angles — love of community, romantic love, brotherly love, love in friendships and the love a leader has for his people,” Upchurch said.

Carter, who is making her Folger Theatre debut, refers to playing Rosalind as her “dream role.”

“Rosalind is one of the best in Shakespeare’s canon in terms of leading ladies,” she said. “She’s a quintessential delicious person. She’s also dual in nature and has been compared to Hamlet in this way. Both characters have a peaceful and harmonious side and are both kind but tough. The difference is that Rosalind lives in the world of harmony, while Hamlet lives in tragedy and can’t handle the dual nature of his soul, which leads to his demise.

“Rosalind is smart, witty and intellectual, but helpless in the affairs of love and is overtaken by her emotion,” Carter said. “She’s an interesting balance of head and heart; that’s where her beauty lies.”

The fact that the Folger Theatre spends year after year producing mostly plays penned by Bard doesn’t seem to be too tough of a challenge for Artistic Director Janet Alexander Griffin. Griffin has produced 85 plays, including 30 written by Shakespeare, for which Folger has been recognized with 140 nominations and 24 awards from Washington’s Helen Hayes Awards.

“Shakespeare’s 36 plays are all different, each presenting their own unique opportunities, challenges and pleasures,” Griffin said. “There are so many aspects to each play and lines of thinking and meaning in each play; people can see nine productions of ‘Hamlet’ and get something different out of each one of them. It’s a very rich field and we love plowing the field differently for each production.

“‘As You Like It’ is not a slam-dunk easy play,” she added. “It has its challenges with a couple of story lines, but it’s full of passion and poetics. It’s bawdy and celestial, which plays both ends of the spectrum, and at the same time enjoyable and understandable to all who come to watch it. Actors on stage send out balls of energy that the audience must kick back onstage. We make sure that happens.”