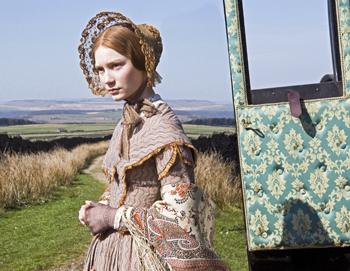 Mia Wasikowska (whose name derives from her Polish mother), a native of Canberra, Australia, was plucked from relative obscurity to be proclaimed Forbes Magazine’s top grossing actress in 2010. That surprising crown was earned largely thanks to her portrayal of Lewis Carroll’s iconic heroine Alice in Tim Burton’s blockbuster “Alice in Wonderland,” which grossed $1.03 billion worldwide, second only to Christopher Nolan’s “Inception.” The low-key 21-year-old actress also appeared in Lisa Cholodenko’s American indie hit, “The Kids Are All Right,” which added $29 million in box office (a perfectly respectable return on a $4 million budget). Wasikowska gained critically favorable notice as Joni, part of Cholodenko’s stellar ensemble cast (including Annette Bening, Julianne Moore and Mark Ruffalo) that gathered a slew of nominations and awards.

At the Waldorf Astoria in Manhattan, Wasikowska mused about how she went from playing Alice, one of the most famous heroines in English literature, to another iconic heroine: Brontë’s long-suffering young English governess who has complete confidence in her abilities and self-worth.

“Yeah, I feel really, really lucky. They are roles that have been through generations and who people have connected to over a number of years. So, yeah, it’s a huge deal to take them on, and I feel lucky to have been trusted with them. And it also sort of makes you the target of the bull’s eye, but it’s good fun though,” she said, laughing.

“I’d just finished ‘Alice.’ I’d just gone home to Australia. It was the first time I’d gone home after a film where I had no school. So I made a list of books I was going to read, and ‘Jane Eyre’ was on it,” she continued. “I think I was on the fifth chapter, and I e-mailed my agent. I was like, ‘This is great! Is there a script around?”

Her agent said she’d look around. “Then, within a month or two later, she e-mailed me back. ‘Here’s the script and the director would like to meet you.’ So it was really kind of a case of great timing,” Wasikowska said.

The actress has generally won over critics with her portrayal, capturing Jane Eyre’s quiet fortitude with an “illuminating stillness,” as Time magazine put it. Wasikowska, unadorned like the protagonist she plays, in part credits reading the classic to get a better understanding of the complex heroine.

“I like to just read it a lot of times. Especially when you’re dealing with language that’s period language,” she says, “it’s a language we don’t use anymore, so it’s important that it feels natural, it’s inside you somewhere. I like to read it a lot and also know it very well because with the research you build a framework of the character. And then you further it with yourself and your own experiences and your emotions.

“For people who don’t know the story, you’re instantly drawn into it and want to know what’s going on,” Wasikowska told us. “The challenge — when you are doing a book that is Jane’s internal monologue from start to finish — is to bring that richness across to the screenplay. But of course, you can’t have her talking all the time. It’s sort of like how do you keep her inner curiosity? It’s a challenge to convey everything because it’s not there in words.

“I feel like that’s one of the cool things about it,” she added. “We all had similar ideas of who Jane was and what was important to bring out in the story. I liked the idea of bringing out a darker side — and also a younger side. Jane was 18. I think I was 20 when I did the role. So I was already two years older. She’s really a teenager. She is a teenager like any other teenager now.”

On that note, Wasikowska describes the Victorian-era governess as a “very modern character. I feel like if you put her in our society now, she would thrive, which is why she has lived for such a long time. People keep connecting to her.”