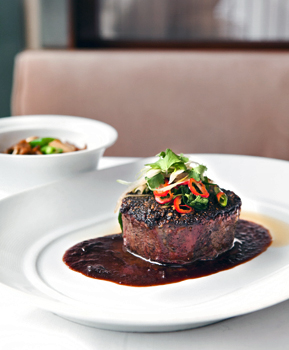 Being stuck in airports several times this winter, I had idle time to consider the ubiquity of the Wolfgang Puck Express kiosks and eateries that seem to have sprouted like mushrooms in response to the airlines’ decision that they aren’t, after all, really responsible for feeding their passengers anymore. After so much growth, diversification and sheer market saturation — have you bought the latest Puck casserole dish? — I wondered how the rest of Puck’s culinary empire was faring, and whether his brand success has impacted the quality of his bread and butter: the celebrity chef’s signature restaurants. A visit to The Source sheds some light on whether Puck has become more celebrity than chef.

The Source, opened at the Newseum in 2007, embodies the fusion concept that Wolfgang Puck pioneered by melding California and French influences that would became a defining chapter in America’s culinary evolution.

Born in Austria, Puck began cooking, sometimes as a pastry chef, with his mother when he was a child. After stints in some of the best kitchens in France, including Maxim’s in Paris, he was advised by a friend to come to the United States, and the rest, as they say, is history.

After a short sojourn in Indianapolis, he headed west to California where his work at Ma Maison garnered critical acclaim and led to the first of many cookbooks. Marrying his classical French techniques with the California focus on locally sourced whole foods, Puck opened his first Spago restaurant on Sunset Strip, launching what has become a family of restaurants that span the continent. But it was with the opening of Chinois in Santa Monica in 1983 that Puck began to tap Asian flavors. Combining these with French and California elements, he introduced the fusion concept that soon became a major chapter in America’s culinary evolution and laid the groundwork for the approach demonstrated at The Source, which opened in 2007.

Located at the Newseum, The Source, Puck’s first (and only) Washington fine dining establishment, debuted to critical acclaim. Under the innovative ministrations of executive chef Scott Drewno, (who began his culinary career as a line cook at Puck’s Chinois in Las Vegas) and executive sous chef Burton Yi, the fusion approach that Puck pioneered back in California all those years ago has evolved, and the appeal and quality remains undiminished since its opening.

The Source gives diners the opportunity to experience both of Puck’s dining directions, with fine dining in the second-floor formal dining room and more casual meals on the first-floor bar and lounge. All throughout, the menu produces the kinds of dishes that have earned Puck his global reputation. Pacific Halibut, for instance, is pan roasted and paired with rich red Thai curry shrimp and a sweet pineapple sambal. In one of the best examples of Puck’s signature fusion style, perfectly grilled lamb chops are served with a chili-enhanced mint vinaigrette, pea tendrils and Hunan eggplant. It’s a surprising and highly effective combination. Another interesting yet delicious effect is the American Kobe short ribs — slow cooked, seasoned with Indian spices, and accompanied by an aromatic saffron raita that cools the palate as it intensifies the beef.

While the main dishes are all equally inventive, the real marks of distinction show up among the “first flavors,” small plates that double as appetizers in the dining room and as dim sum during Saturday brunch.

That brunch, which usually offers approximately 24 different small plate choices, is an excellent and economical way of tasting the creative genius of Drewno and Yi channeling Puck. Perhaps one of the restaurant’s most noted small plates is the spicy tuna tartare. It’s served in tiny, perfectly shaped sesame-miso cones, with shaved Bonito and Tobiko caviar — it’s almost too pretty to eat, but that would be a waste of a superbly inventive dish. For the more conventional palate, American Kobe beef sliders, served with a fat slice of pickle and house-made mini sesame buns, are a perfect choice. One of Puck’s original signature dishes, a salad of wild greens and chicken “Chinois style” appears on the small plates menu. Dressed with Chinese mustard dressing and candied cashews, it’s a light and tasty dish that shows up across the Puck empire, even in airports — for good reason. 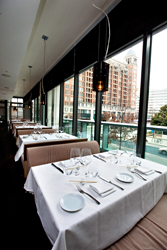 Many of Puck’s small plates are inspired by traditional dim sum but while the names of the dishes may sound familiar, the interpretations are not. The brilliant sea scallops “sui mai,” featuring steamed packets of chopped scallop, depart from the usual thanks to an intense saffron cream sauce. Bao buns take on a new level of sophistication by incorporating open-faced crispy duck. There’s also a dazzling array of dumplings, with ingredients ranging from organic chicken and wild field mushrooms to garlic chive stuffed with King crab to Kurobuta pork and Chinese mustard.

In a nod to more traditional brunch fare, the Source offers sautéed Maryland crab cake Benedict and a lobster club sandwich served intriguingly on a whole grain, dried berry bread. Another choice, the Kobe beef hash, is heavier on the potato than the meat.

To offer additional dining options, The Source recently began to offer a Japanese Izakaya-style menu on the first floor. Modeled on the menus of traditional Japanese watering holes that offer a greater variety of food than is typically found in bars, it offers sushi, sashimi, noodles and dumplings, and dishes prepared on a traditional Japanese robata grill. The menu provides diners (in particular visitors to the Newseum who have not come to Source as a destination spot) a chance to sample the talents of the kitchen without the commitment a full meal requires.

Like the black and white of newsprint, The Source’s simple design amounts to so much more than the sum of its parts under the creative force of EDG (Engstrom Design Group). Glass and steel, soft neutral leathers and highly polished hard woods create a sleek, modern look that’s accentuated by low lighting and minimal table settings. In homage to the fourth estate, the openness created by the floor-to-ceiling windows and glass walls are meant to signify the transparency of the American press. While the sparkle that came with being a newly opened hotspot has mellowed to a duller gleam over the years, The Source remains elegant and chic — and its two-story wall of wine with more than 2,000 bottles is just as impressive.

Service at The Source is confidently unobtrusive, with staff seeming to take a real interest in the food they are serving. The only downfall we’ve observed is the staging that sometimes seems to pose a challenge to the staff; long waits with nothing to eat, then so many plates presented all at once make it hard to enjoy the uniqueness of each one.

But what’s remarkable about Source is its consistency. After four years, it’s as polished as ever. Despite the growth of the whole Puck culinary conglomeration, his presence in the nation’s capital hasn’t suffered any decline in quality or appeal, or overexposure for that matter. Perhaps this ability to maintain quality on all fronts is ultimately the source of Puck’s remarkably enduring success.