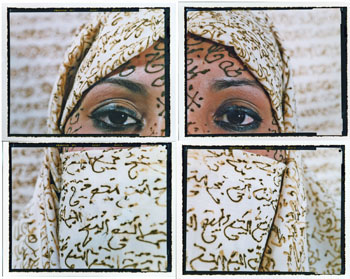 Lalla Essaydi is largely known for her photographs of women clothed in white fabric inscribed with intricate, sepia-tinted Arabic calligraphy such as “Converging Territories #24.”

Drawing on her own life, Lalla Essaydi blends tradition and modern interpretation in her provocative multimedia artwork now on display at the National Museum of African Art.

With a collection of nearly 30 pieces, the Moroccan-born, New York-based photographer and painter challenges Arab, Muslim and African perceptions of female identity with the exhibition “Lalla Essaydi: Revisions.”

Johnnetta Betsch Cole, director of the National Museum of African Art, said Essaydi’s work is not only “visually stunning,” but it also confronts “deeply entrenched historical notions about femininity and womanhood through images of the Muslim world. Her work is vital and offers a fresh new voice and needed insight as it challenges the stereotype and perception of Arab, African and female identity. The beauty and brilliance of her work is singular.”

It’s also mesmerizing. Essaydi is largely known for her photographs of women clothed in white fabric inscribed with intricate, sepia-tinted Arabic calligraphy. Similar henna patterns are also etched on the visible parts of the women’s bodies, while the backgrounds are draped in calligraphy-covered cloths as well. The result is a multilayered mosaic that juxtaposes feminine imagery with the traditional text often used by men (who primarily transcribe the Koran and other sacred literature).

These intimate portrayals of women against Arabic-inspired backdrops form a quietly powerful commentary on gender and society — created by an artist rooted in liberal values who transcends different cultures and clearly believes in freedom of expression. 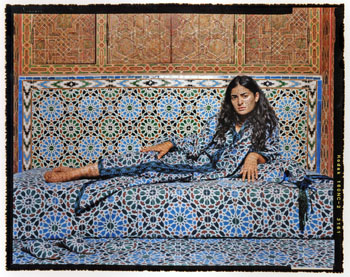 Essaydi has described her work as “intersecting with the presence and absence of boundaries — of history, gender, architecture and culture — that mark spaces of possibility and limitation. This is my story as well.”

Born in Marrakech in 1956, Essaydi lived with her husband and children for several years in Saudi Arabia before moving in the 1990s to Paris, where she attended the École des Beaux-Arts. After relocating to the United States, Essaydi earned a bachelor’s of fine arts degree from Tufts University in 1999 and a master’s from the School of the Museum of Fine Arts in Boston in 2003. Today, she lives and works in New York City.

“In a sense I am a Western artist, making art in a style I was unable to use in my home country,” said Essaydi.

Indeed, the artist’s thought-provoking work seeks to debunk stereotypes and broach subject matter that remains taboo in many traditional societies.

For instance, despite studying and admiring the work of 19th-century Orientalist painters like Eugène Delacroix and Jean-Auguste-Dominique Ingres, she rejects their objectifying representations of North African women, who were often hidden behind harems and referenced as exotic play-toys for men. With her series “Les Femmes du Maroc,” Essaydi poses her models in positions similar to those found in well-known Orientalist paintings, yet strips her renditions of eroticized and romanticized overtones. By removing all the decorative elements and inserting her own handwriting in its place, Essaydi ensures that the women in her works emerge as the center of the image, demystifying the Orientalist fantasy. 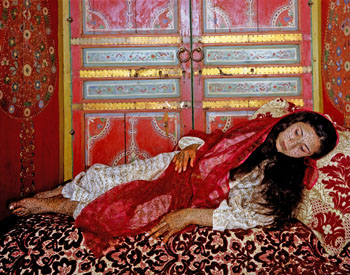 “In the context of Orientalism, beauty is quite dangerous, as it lures the viewer into accepting the fantasy,” she said. “I want to expose the distortions these paintings present and provoke the viewer into a different kind of seeing, one that shapes a new understanding.”

Many of the images in her photographic series “Silence of Thought” were taken in a Moroccan harem similar to the family home where Essaydi grew up as one of 11 children to a father who owned olive groves and had four wives. The title of the series draws inspiration from Henry Wadsworth Longfellow’s poem “The Three Silences of Molinos,” which praises the three silences of thought, speech and desire — the expectations, Essaydi says, of women in her native country.

“My photographs [of Morocco] grew out of a need I felt to document actual spaces, especially those of my childhood,” she explained. “Even now they serve as symbolic reminders of my past.”

Likewise, the still-life images of her series “Converging Territories” references Essaydi’s past. Here, the application of henna, traditionally used to adorn a bride’s hands and feet on the eve of her wedding, is infused with Essaydi’s memories of her own bridal experiences. In this series, groups of women, as well as the customary gifts they bring to these celebrations — flowers, eggs, sugar cones and candles — are all delicately decorated with a henna calligraphy that tells the artist’s personal story.

“It was important for me as an artist to go back and confront the feelings I had attached to this place, to re-encounter the child I once was, in order to understand the woman I had become,” said Essaydi. “I created an imaginary space where the voice of these women, through written text, became both their walls and their freedom, where they can be who they want without restraint or hindrance.”