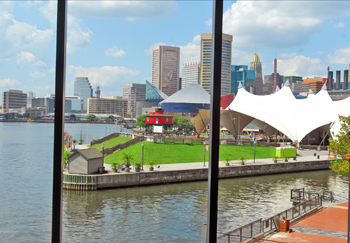 The 256-room Four Seasons Hotel boasts sweeping views of Baltimore’s Inner Harbor from its sleek glass tower, seen on the opposite page.

BALTIMORE — A Japanese restaurant that has the East Coast’s largest selection of sake. A 10,200-square-foot spa featuring 11 treatment rooms offering everything from salt scrubs to aromatherapy massage. And a commanding view of the Inner Harbor from Baltimore’s most spectacular infinity pool.

It’s almost enough to convince visitors they’re not really in Charm City at all.

But then again, Baltimore — Maryland’s largest city — has changed dramatically in the last few decades, evolving from a gritty, blue-collar manufacturing hub into a revitalized waterfront destination, anchored by the bustling Harborplace retail complex that opened in 1980.

But Baltimore is taking that transformation up another notch, adding a level of luxury and sophistication not often associated with a city that’s still proudly rough around the edges — and the gleaming new Four Seasons Hotel is a cornerstone of those high-end ambitions.

Inaugurated last November, the 256-room luxury property sits conveniently between the Inner Harbor and Little Italy, just off South President Street in downtown Baltimore — in an area that not long ago was dominated by vacant parking lots and derelict warehouses.

The affable Carralero arrived in Baltimore in mid-2011 direct from Hungary, where he spent nine years running the Four Seasons Gresham Palace in Budapest. Before that, he was second-in-command at the Four Seasons George V in Paris. The hotelier’s impressive resume also includes stints at the Four Seasons in San Diego and the Ritz-Carlton Pentagon City in Arlington, Va.

Carralero, a Spaniard who was raised in Geneva, said Four Seasons — which operates 88 luxury hotels in 35 countries from Argentina to Azerbaijan — sees a bright future for Baltimore despite its well-known reputation for crime and neglect.

“There’s a need for us to be in this market. We’re investing long term, not just for the next two or three years,” he told us over lunch in the hotel’s signature restaurant, Wit & Wisdom. “We’re contributing to the rebirth of Baltimore by bringing in an upscale product that prior to our arrival was lacking. Harbor East is an enclave, and the unique thing is that the Four Seasons is a contemporary building in a city with a lot of tradition.”

H&S Properties Development Corp. has already completed more than 5.5 million square feet of office, residential, hotel, retail, entertainment and parking space in Harbor East. According to the company website, Harbor East supports around 10,000 jobs and has generated $1.2 billion in business that in turn has boosted the Baltimore City economy by $1.5 billion, resulting in $58.5 million in state and local tax revenue.

The Four Seasons alone represents a $200 million investment and opened with 240 employees; that’s since grown to 400 as it’s expanded with Pabu restaurant, the infinity pool deck and other amenities.

“The Four Seasons and the Legg Mason tower are the crown jewels of Phase I for Harbor East,” said the company’s vice president of development, Michael Ricketts. “The Four Seasons is the best hotel you could imagine, and it’s performing just like we anticipated it would. The feedback we’re getting from the community is phenomenal.” 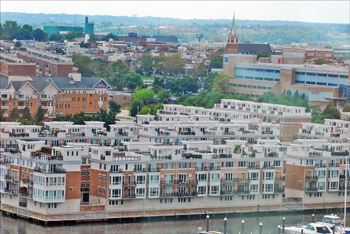 Among other unique little touches, the Four Seasons features selected pieces of art from the Washington Color School, a visual art movement of the late 1950s through the mid-1970s that focused on largely abstract works. Private cabanas around the heated infinity pool offer an urban oasis. And its Wit & Wisdom tavern, a restaurant by Michael Mina, has become one of the swankiest culinary hotspots in town, serving local delicacies wherever possible. So does the Japanese-themed Pabu, a collaboration between Mina and restaurateur Ken Tominaga.

“We try to source products from Maryland growers as much as possible,” said Carralero, noting the presence on the menu of items like greens and herbs from Hamilton Crop Circle; Maryland blue crabs from J.M. Clayton Seafood Co. in Cambridge; beef from Piedmont Ridge; shrimp from Marvesta Shrimp Farms; and Chesapeake Bay oysters from Rappahannock River Oysters.

None of this comes cheap — dinner entrées at Wit & Wisdom for example range from $26 to $48. And therein lies the challenge for the Four Seasons: Can Baltimore sustain such an upscale brand? Moreover, a glut of hotels have opened in recent years in the city despite the economic downturn, leading to an oversupply of rooms that has tempered occupancy rates.

But the travel industry has been steadily recovering, both regionally and nationwide, and the Four Seasons is betting that not only will Baltimore continue to grow, it will attract clientele willing to pay top dollar for top-tier service and amenities. That kind of optimism also motivated the developers behind Harbor East to invest in reviving the neighborhood.

“We’re very lucky to have Michael Beatty and the Paterakis family as a driving force to keep cultivating that great image we’re trying to develop,” Carralero told us. He said the Baltimore of today is a far cry from 30 years ago, when the city was desperately teetering on bankruptcy.

One of the first buildings to sprout up in the area was The Vue, Carralero said. “The Marriott came right after that. Obviously there was an ongoing sense of vision of how Harbor East could contribute to Baltimore as a destination. When we bring meeting planners here, if they remember Baltimore in the ’70s or ’80s at all, they say that it’s changed a great deal.”

Carralero noted that the global financial crisis of 2008-09 hit Baltimore hard, but that business is on the upswing again. Yet crime is still a major worry.

“It’s definitely a concern, primarily when we see things blown out of proportion. But crime has come down slightly and continues to decrease. We have a commitment from the mayor’s office to reduce crime.”

Even so, he said, “Harbor East is a very secure, self-contained area, and crime hasn’t deterred people from coming here and doing business with us.” Indeed, right outside the hotel are dozens of high-end retailers including J. Crew and Anthropologie.

All these upscale boutiques and nearby luxury apartment buildings are clustered around Baltimore’s famous Katyn Forest Massacre Monument — a 30-foot-tall sculpture that commemorates the 1940 massacre of thousands of Polish army officers and prominent citizens not by Nazis but by Soviet troops during World War II.

Over the Labor Day weekend, Baltimore hosted its annual Grand Prix auto race, and during the annual Preakness Stakes — one of the nation’s premier horseracing events — Four Seasons hosted several top corporate events along with a series of food and beverage specials themed around the “middle jewel of the Triple Crown.”

Professional baseball and football lures thousands of out-of-town fans to this sports-crazy town, says Carralero. He expressed hope that one day — in addition to Baltimore’s beloved Orioles and Ravens — Maryland’s largest city will boast its own professional basketball team as well.

Ricketts agrees. “Baltimore is a two-sport city, so we have baseball and football,” he said. “We don’t have a winter basketball or hockey team, but if we had all 12 months covered, it would make a difference.” 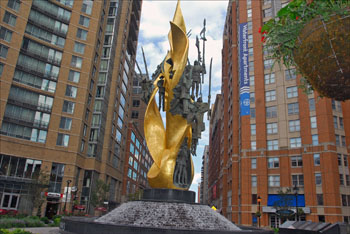 Baltimore’s famous Katyn Forest Massacre Monument lies at the heart of the $1.67 billion Harbor East mixed-use development project that has replaced the neglected warehouses that once dominated the neighborhood with posh hotels, shopping and residences.

To be sure, the Four Seasons isn’t the only game in town; nearby competition comes from the Marriott Waterfront, the Hilton Garden Inn and the Royal Sonesta Harbor Court. Yet it’s clearly in a league of its own as the priciest property in the city. A city-view room in mid-October cost about $359 and the presidential suite — complete with Kawai baby grand piano and stunning views of the harbor — can go for $7,000 a night.

“Not everyone can stay at this hotel,” group sales manager Sanae Harrison admits. But high prices are no deterrent for one of this luxury property’s most lucrative guests: wealthy foreigners, especially Arabs, in need of medical treatment.

Harrison said that 80 percent of her overseas guests fly in from the Middle East, and that international sales have jumped by 30 percent since the hotel’s inauguration.

She said the bulk of that business comes from Saudi Arabia, with the oil-rich United Arab Emirates, Qatar and Kuwait supplying most of the remainder. It certainly helps that earlier this year, the UAE opened the 355-room Sheikh Zayed Tower at nearby Johns Hopkins Hospital — a gift valued at $200 million. Before its opening, many of Four Seasons guests previously stayed in Washington, D.C., and received medical treatment in Baltimore.

“We do not discuss why they are here. You never want to ask why. It’s a very sensitive subject,” said Harrison. “We’re here to make them comfortable.”

That explains why this hotel offers its guests as many as 15 Arabic-language satellite TV channels, not to mention halal food prepared according to Islamic tradition.

“Some of them have never been here before, so we really try to make their arrival experience special,” explained Harrison, who’s originally from Morocco. “We put arrows on the wall pointing to Mecca. We also purchased prayer mats that tell you which direction to face when praying. I’ve not seen that anywhere else.”

She added: “Around Ramadan, we come up with a customized menu because of the fasting, adding things like apricots and top-quality dates. We have an espresso machine in every room. They love it.”

These Arab guests are particularly important because they often stay for a month at a time, and together with their royal entourages can take up to two dozen rooms.