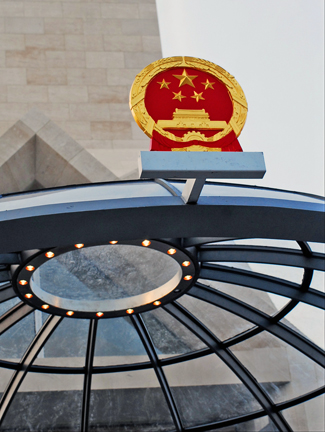 On a blistering hot day in August, the Chinese Embassy in Washington had a sort of “glasnost” moment — the Russian term for “openness” that became a watchword during the dying days of the Soviet Union.

For several hours, around two dozen U.S.-based tour guides were led around parts of the massive embassy building and shown roped-off reception rooms, banquet halls and walls decorated with paintings of sacred mountains and embroidered bamboo forests. They oohed and ahhed as their young Chinese guide consulted her iPhone to make sure she was giving them the right information about the artwork, the history and the architecture of the I.M. Pei-designed building that made a splash on the Washington diplomatic scene when it was inaugurated in 2008.

Even though this inside glimpse for the tour guides had an ulterior motive — to get them to travel to the special autonomous region of Macau for the annual international gathering of tour guides in January next year — and was capped off with a viewing of a slickly packaged documentary about Macau’s reunion with the motherland, some still considered the embassy visit to be a bit of a breakthrough for Chinese diplomatic missions.

China has been undergoing economic glasnost for the past 30 years, and it’s certainly bolstered its soft power abroad, investing billions in other nations both in its backyard and around the world. Despite the supersonic growth and increasing clout of what is now the world’s second-largest economy, politically, the communist nation remains, well, communist.

This month, the country is set to undergo a major government reorganization — a transition that, as always, takes place behind closed doors and is shrouded in secrecy. Even the anointed new leader, Xi Jinping, went missing for a few weeks, fueling rampant speculation over his health and other conspiracy theories.

Until he had re-emerged in public life in mid-September, the response of the Chinese government to Xi’s mysterious disappearance was to ban his name as a search term on blogs, and to ban references to back injuries, “Xi’s car accident” and liver cancer — all mentioned as possible causes for his sudden absence.

In many ways, China’s missions abroad mirror the opacity of its labyrinthine central government. Dealing with Chinese consulates or embassies, not to mention visa offices in China itself, has often been characterized by unanswered phones, difficult, unbending and sometimes downright rude consular officials, and visas being refused with little or no explanation.

Here in Washington, there have been signs of a tepid opening. In addition to the recent Macau-related tour, the embassy welcomed more than 300 local schoolchildren for an open house to “experience Chinese culture” and has opened its doors to various other events and fundraisers. Notably, in 2011, the embassy hosted the annual Opera Ball, arguably the social event of the year in Washington, in what was seen by many locals as a debutante’s “coming-out” party for Beijing.

Likewise, China’s current ambassador to the United States, Zhang Yesui, who previously served as permanent representative to the United Nations, is widely seen as an accessible, personable and highly competent envoy.

All of this has led some Americans to think that, finally, China’s diplomatic missions are catching on to the notion of public diplomacy and starting to open up to outsiders.

But some who have had dealings with Chinese consular officials, including Andrew Schrage, founder of the personal finance and lifestyle website Money Crashers, are not so sure.

At the beginning of 2012, Schrage went to the Chinese consulate in Chicago to obtain — he hoped — a multi-entry visa for China. He wanted to travel there for personal, not business reasons.

“When I got to the window and made my request, the employee walked away and left me standing there for nearly 30 minutes without any explanation. It turned out that they were concerned about Money Crashers,” Schrage told The Washington Diplomat.

It’s well known that China keeps a tight rein over media in the country, and Schrage thinks that the consulate in Chicago considered Money Crashers to be a journalistic venture, and him to be a journalist. That’s wrong, the American insists, saying he wanted to go to China to visit members of his extended family and friends.

“Money Crashers is a personal finance educational site that had no interest in reporting on China and its inner workings,” he said.

So he waited in the visa office until an official eventually said his application was “in process.” He should go home and wait for at least a week, he was told. He was also informed that his application could be rejected.

But a week later, Schrage got a call to say his visa had been approved. Delighted, he went to the consulate, paid $140, and reclaimed his passport.

“I was excited to be on my way, but when I opened up my passport, I discovered that the visa I was issued was only for a double entry. When I returned to the window to tell them that they issued the incorrect visa, they said that nothing could be done about it. They would not give me a refund — they said, ‘Absolutely not’ — and my only option was to reapply for a multi-entry visa and pay the visa fee again,” Schrage explained.

Schrage ended up going to China with his double-entry visa, but that meant he was not able to visit all the friends and family he would have liked to. He argues that the “extremely high visa fees that China charges” are a barrier to the country’s apparent moves toward greater openness. One of the U.S. tour guides who was treated to the guided visit of the Chinese Embassy in D.C. in August agreed. She audibly gasped when she heard the triple-digit price of a visa — $140, just as it was for Schrage — and said, “I won’t be going.”

Schrage is not the only would-be tourist to China who’s had a run-in with officials over a visa application.

When friends of Baltimore native Marian Rosenberg, who speaks fluent Mandarin and has been general manager of a foreign-owned translation and localization company in China for eight years, applied for visas to travel there back in 2005, “they were yelled at by the visa officer for leaving part of the application blank — a multiple-choice item,” Rosenberg said by email.

But that was seven years ago, and when Rosenberg’s parents applied for a visa last year, “the lady at the desk checked all the correct boxes for them, wrote notes about their situation being different, and went through their folder taking the stuff that needed photocopying.”

“No glaring. No sending them back to start the line all over again,” she said.

To be sure, American consulates have given foreigners their fair share of headaches as well, stemming from bureaucratic ineptitude, high visa fees (just ask the Brazilians) and security barriers that discourage many foreigners from even bothering to apply to come to the United States.

And the recent tragedy in Libya, where four U.S. diplomats, including Ambassador J. Christopher Stevens, were slain during an attack on the consulate in Benghazi, painfully illustrates why no country is about to throw open the doors of its missions to outsiders.

But even in China, a call has gone out for the emerging powerhouse to improve its public diplomacy outreach.

Wang Lili, a researcher at the Public Communication Institute with Renmin University of China, was reported by China Daily as saying that, “Effective public diplomacy is essential if a nation is to promote its national interests and achieve its foreign policy objectives.”

Wang added: “China’s present public diplomacy does not match its position in the world and it needs to be improved.”

With embassies and consulates serving as the public face of China abroad, they could be at the forefront of that effort, with a first step being greater openness with tourists and businesspeople who want to visit China, and journalists seeking information. My request to the Chinese Embassy in D.C. for information for this story went unanswered.

Karin Zeitvogel is a freelance writer in Washington, D.C. When she applied for a tourist visa at the Chinese consulate in London in 1991, her initial application was refused with no explanation. She went back the next day, re-filed an application, but this time put her occupation down as “teacher,” not “journalist.” She got her visa almost immediately and thoroughly enjoyed her visit to China.