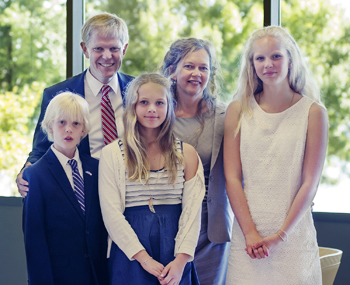 “At home I wouldn’t do this,” said Madeleine Lyrvall, the jovial wife of Swedish Ambassador Björn Lyrvall. “They would all ride the bus or bike … and so would we. We bike to work at the Ministry [of Foreign Affairs]. And everyone wears a helmet,” said the safety-conscious Swede.

Like her husband, who served as director general for political affairs at the Ministry of Foreign Affairs in Stockholm before coming to Washington, Madeleine also spent many years working in the ministry as a diplomat. Among other areas, she worked on security and defense issues and, more recently, human rights, including gender equality and children’s rights. Now in the U.S. since 2013, she’s traded in her Foreign Service hat for a different set of duties.

Madeleine Lyrvall and her husband, Swedish Ambassador Björn Lyrvall, are pictured with their three children, Fredrik, Mimmi and Anna.

Anna, their oldest child, is 16, attends Edmund Burke School and loves travel soccer and riding at Meadowbrook Stables. Mimmi, who turns 15 in November, is a student at Washington International School and dances at Joy of Motion studios. Fredrik, 12, goes to Washington Episcopal School and is an avid soccer player. “It’s like having three teenagers because Fredrik is very mature,” the proud mother notes.

“It is a treasure to be a mother,” Madeleine told us. “It is a privilege to have them.”

But she admits that while they are having an “intense and wonderful time, teenagers are challenging.”

Madeleine herself has previous experience living in the United States as a teenager. In high school, she was an exchange student in San Jose, Calif. Then, after earning a master’s degree at Lund University in Sweden, she returned and received another master’s from the University of California in Berkeley before earning a third master’s from the London School of Economics. That’s when she went home to Sweden and started her own diplomatic training, which led to a long career in the Foreign Service.

Her husband’s postings include Leningrad, Moscow, London and Brussels, where he served in Sweden’s Permanent Representation to the European Union.

Having observed both cultures, Madeleine said that one difference between young Swedes and their American counterparts is that Swedes tend to have more responsibility yet more freedom. “Boyfriends are not as big a deal at home and relationships are not as important as they are here. Otherwise, there are more similarities than differences,” she told us in the sunroom of the Swedish Residence on Nebraska Avenue, next to Japan’s residence and just down the street from American University.

“We don’t have separate boys’ and girls’ schools. They have physical education together and dance together, learning to respect each other,” she continued, reflecting on growing up in Sweden, which enjoys a generous Nordic social welfare system that provides universal health care and tertiary education to its people.

“Children are treasured in Sweden,” Madeleine said. “From nursery through university, school is free. We have lots of wonderful playgrounds and access for the children to culture.

“We are not socialist. We are a welfare state,” she added. “Everyone has the same health care. Adults pay, at most, $150 for the year and after that, everything is free. Children are free up to age 18.”

Madeleine also noted that Swedish mothers and fathers each have the same 18 months of maternity and paternity leave, with 80 percent of their pay included. “We have come a long way regarding equality between men and women. Women are economically independent with legal rights,” Madeleine explained.

She also takes particular pride in Sweden’s Nobel Laureate tradition in literature, medicine and science, whose awards are also celebrated here in D.C. each year. In the commercial realm, Sweden’s own numerous advances in science and technology include Volvo, the automotive group that’s world-renowned for its safe, innovative cars. “Volvo has always been close to my heart since they are made in Gothenburg, my hometown,” Madeleine said.

More recently, Sweden has become renowned for being one of the few European countries — alongside Germany — to take in large numbers of asylum seekers from war-torn nations such as Syria, absorbing the largest number of refugees in relation to its population of all the European Union member nations.

The Scandinavian nation prides itself on being the world’s conscience and serves as a counterweight to the populist, anti-immigrant sentiment sweeping EU countries such as Hungary and even fellow Nordic neighbors such as Denmark. While the liberal open-door policy has inevitably provoked some political backlash in Sweden, it has also infused the predominantly white, Christian nation of nearly 10 million with religious and ethnic diversity.

“Sweden has been considered one of the ‘blondest’ of all countries,” Madeleine observed. “Sweden was a very homogeneous country. Yet thanks to Sweden being an open and welcoming society, we are a multicultural society today.” 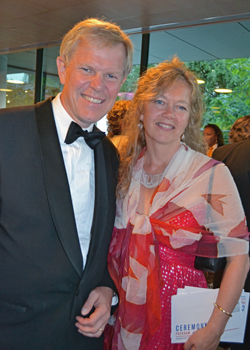 Madeleine Lyrvall and Ambassador Björn Lyrvall both worked in the Swedish Ministry of Foreign Affairs.

That multiculturalism is one of the many similarities that Sweden shares with the United States.

“More similarities between our two countries are that we are both creative nations. We are the third-biggest exporter of popular music in the world,” Madeleine told us.

“We have a modern, open, innovative culture with ties to the U.S. that are very strong and go back a long time,” she said. “We are also a trading nation, starting with the Vikings. We export more than we import,” she added, noting that over 300,000 Americans have jobs that were created by Swedish companies. “In 2013, President Obama visited Sweden. His visit was a fantastic start for our Washington posting.”

While Madeleine has enjoyed the professional and personal benefits of a life in the Foreign Service, it has its drawbacks. “There is the strain of moving and all the logistics, but it’s a fun kind of life. And now that we have the internet and Skype, we can keep in touch so easily with family and friends.”

The Lyrvalls moved their entire house over from Sweden to furnish the private quarters here. The residence’s official first floor was already furnished and remains the same. Otherwise, “IKEA has most everything else we might want,” Madeleine noted.

In addition to the iconic ready-to-assemble furniture designer, Sweden is famous for its coffee blends, although Madeleine admits she has a preference for American teas and takes peppermint bark home with her when she visits for the Christmas holidays.

“My husband and I both like to cook — so do our children. Our favorites to make are fish and traditional Swedish meatballs. We have a wonderful embassy chef, Frida Johansson, who works out of the kitchen downstairs while we use the kitchen upstairs in the private quarters,” Madeleine said.

Six years in Brussels, their most recent foreign posting, and now Washington have been “fascinating” for this family of five that spends their free time in D.C. going to the theater. They see anything from modern plays and opera to works by Shakespeare and famed Swedish writer Liv Strömquist, their personal preference.

“Our children love it here. It is a fantastic opportunity for them to experience all that life in Washington has to offer, including the many world class museums, music and art,” Madeleine said.

In fact, the country’s sleek embassy in D.C., known as the House of Sweden, has also earned a reputation as a local center of arts and culture — and one of the few embassies to enjoy a scenic location along the Georgetown Waterfront.

“If we have a free weekend here, we love to take a long walk with our dog Melvin, a Bichon Havanese, or a trip to the gym with the whole family. Washington is a beautiful city and so green with all its parks. I’d like to be outdoors for breakfast through dinner,” Madeleine laughed. “I love to get in our hammock. We have a tennis court too and all of us play but none of us are very good.”