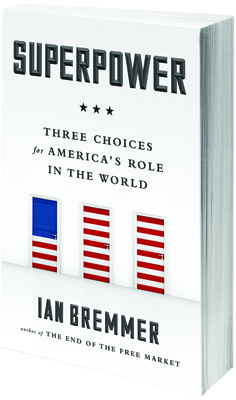 With striking and sometimes amusing frequency, Ian Bremmer is invited by news organizations to explain the most recent developments in global politics and economics. Bremmer, president of Eurasia Group, a consulting and political risk research firm, and a foreign affairs columnist for Time magazine, is able to confidently hold forth on a wide range of topics.

Perhaps it’s just me, but I sometimes find his certainty off putting. The perspectives of practitioners in the trenches always seem more intriguing than pundits or consultants who seem to know it all and rarely confess to being wrong or confused or surprised. Pundits embrace the role of Monday-morning quarterbacks, watching from the sidelines but never actually playing in the game.

Even with this bias, Bremmer’s new book, “Superpower: Three Choices for America’s Role in the World” offers a solid framework to think about American foreign policy and consider how the next president might manage it.

In the book, Bremmer argues that the world is in profound flux as China, Japan, Russia, India, Brazil, Turkey, Iran, Saudi Arabia and other nations evolve in complex ways. Meanwhile, the United States, though still a powerful nation, is struggling and searching for a new role. “The U.S.-dominated post-Cold War order has come to an end. We now live in a world where no single power or alliance of powers can offer consistent global leadership. No one knows what comes next,” he writes.

The United States, according to Bremmer, has been weakened by a quarter-century of hesitant leadership and self-inflicted wounds. Consequently, America is “now less able to convene a coalition, forge trade agreements, build support for sanctions, broker compromise on an important multinational dispute, or persuade others to follow it into conflict than at any time in the past seven decades.”

Bremmer believes that a succession of U.S. presidents — George H.W. Bush, Bill Clinton, George W. Bush and Barack Obama — have faltered in the aftermath of the Cold War. The first Bush dreamed of a new world order, but was undermined by a weak domestic economy that led to his electoral defeat. Clinton had a shrewd sense of domestic politics and presided over robust American job growth, but was less adroit on the international stage. He blundered by backing NATO expansion in 1999 and failing to respond forcefully to terrorist attacks beginning in the late 1990s. The second Bush propelled America into ill-advised and ruinously expensive wars in Iraq and Afghanistan while also championing expensive tax cuts and Medicare expansion that fueled large budget deficits.

Bremmer is no easier on the current occupant of the White House. He claims America’s influence has declined significantly during Obama’s presidency and his erratic leadership has left the world “thoroughly confused.” He says Obama has failed to chart a clear foreign policy and has been far more definitive about what the United States won’t do than what it will do. “In reality, America no longer has a foreign policy strategy,” he writes, charging that Obama has vacillated between assertiveness and passivity. He also argues the president has delivered speeches that span the rhetorical map but offer no clear guidance about American intentions or convictions.

“President Obama has consistently refused to try to build public support for an ambitious superpower foreign policy,” he writes. “But he has also refused to admit we must do more with less by setting a few priorities and sticking to them. And he has refused to redefine America’s responsibilities by making clear that Washington will no longer play the role that others expect and that other governments will have to step forward and do more. In short, Obama has refused to choose.”

Bremmer declares that “if the next president bounces from one challenge to the next without a larger vision of America’s role in the world, and if our words continue to run far ahead of our actions, we will soon face more foreign policy problems and crises than any president could hope to manage.” He adds that while American foreign policy is in disarray, the nation has considerable underlying strengths. It remains wealthy, has deep and efficient capital markets, a culture of innovation, robust investment, massive energy resources and favorable demographics.

America must offer the world a coherent foreign policy, Bremmer contends, outlining the three alternatives that form the basis of his book. He devotes a chapter to each and urges readers to select the approach they find most compelling.

The first option, which he labels “Independent America,” calls on the United States to turn inward and focus almost exclusively on domestic challenges. “It is time for Americans to declare their independence from a foreign policy that bankrupts our treasury, depletes our energy, undermines our credibility and our self-confidence and cannot be sustained,” he writes in articulating this perspective. The focus here is to rebuild America and resist trying to solve the world’s problems, leading instead by example.

The second option is called “Moneyball America” and is based on the premise that the United States should have a less expansive and expensive foreign policy, but one that still defends U.S. interests whenever they are threatened. It should focus on leading coalitions to block the proliferation of weapons of mass destruction and deny strategic opportunities for terrorists. America should also promote global growth, trade and investment. 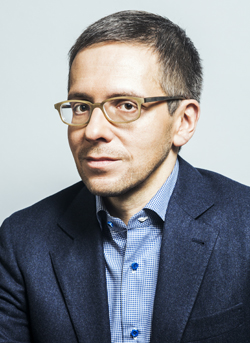 Under this foreign policy rubric, U.S. decisions to intervene should be guided by the so-called Powell Doctrine. This refers to Gen. Colin Powell’s proclamation that before any intervention is undertaken, several fundamental questions should be answered affirmatively: Is a vital national security interest threatened; does the United States have clear and attainable objectives; have the costs and risks been clearly analyzed; has all nonviolent policy been fully exhausted; is there a plausible exit strategy; have the consequences of U.S. action been fully considered; is the action supported by the American people; and does the United States have broad international support.

The final option, “Indispensable America,” calls for a robust foreign policy in which the nation defends its geopolitical interests and actively seeks to advance its way of life. Under this approach, the United States would vigorously assert itself and intervene aggressively both for strategic reasons and to promote democracy, freedom of speech and other values. This strategy rests on the assumption that turning inward would only threaten America’s own security.

Bremmer argues that each option has strengths and weaknesses and a fundamental coherence. It’s essential for the country to pick one and embrace it. “We must choose a strategy and our words must align with it,” he writes, adding that “an ambiguous, improvised foreign policy invites rivals and enemies to test U.S. intentions. Allies don’t know how much responsibility to accept for their own security.”

He concludes that “Independent America” is now the best option, largely because the American public no longer supports ambitious and costly overseas entanglements. “The next president must recognize that the American people are exhausted by calls for intervention in foreign conflicts they don’t understand,” he writes, noting that polls show about 80 percent of Americans believe the nation should be less active in global affairs. There is no longer domestic support for a robust foreign policy, Bremmer concludes.

“Superpower” is a valuable book. Bremmer’s tour of the world scene is insightful and informative. His comments about China are perceptive and even prescient, warning that turmoil there could “throw the entire global economy into reverse.” He also offers keen insights into the dangerous and intensifying rivalry between Saudi Arabia and Iran and provides an intriguing perspective about Russian President Vladimir Putin’s Ukraine policy.

But it’s far easier for pundits to preach than to practice their own words of wisdom and simplistic sound bites. And some of Bremmer’s conclusions ring hollow. In particular, his criticisms of Obama are hyperbolic. While Obama’s foreign policy record is uneven, it’s far too early to render a verdict as sweeping and disparaging as the one Bremmer proclaims. The truth is that Obama’s foreign policy legacy will be determined, in large part, by how things turn out in Iraq and Afghanistan, the eventual fate of the Islamic State and the durability of the nuclear agreement with Iran. No one, including Bremmer, knows how these will be viewed several decades from now.

Bremmer accuses Obama of having an incoherent foreign policy, but his criticisms of the president struck me as incoherent. For example, he says that Obama entered the White House trying to accomplish several central goals such as stabilizing the global economy, ending the Iraq and Afghan wars and avoiding other wars.

“In that respect, the president has largely delivered,” he writes. But then he adds confusingly: “Yet no chief executive has so evidently lacked a clear foreign policy focus.” Didn’t Bremmer just describe what Obama’s focus was and acknowledge that he largely succeeded in accomplishing his goals?

Bremmer says that Obama’s speeches have included elements of all three of the foreign policy options: Independent, Moneyball and Indispensable America. This is accurate, but I would guess this has also been the case for most post-World War II presidents who have modulated foreign policy speeches, depending on their audience and the occasion.

Bremmer also argues that Obama’s foreign policy has been ad hoc and reactive. But this is always the case and his criticism lacks historical grounding. For example, Franklin D. Roosevelt’s foreign policy was notoriously messy and inconsistent. Harry S. Truman is often seen as one of the leading architects of America’s containment policy that endured for half a century. But if you read memoirs about his administration, you learn that much of his foreign policy was made up on the fly and was hardly the paragon of consistency and clear planning. It was only years later that historians began to judge it a success. Similarly, a recent book about Ronald Reagan’s foreign policy by James Graham Wilson, “The Triumph of Improvisation,” argues that Reagan’s foreign policy was based on a few core beliefs and then assembled on the go, responding to events and the actions of other global leaders.

Bremmer’s three foreign policy models are helpful to think about, but the differences between them are not abundantly clear, especially between Independent and Moneyball America. Both approaches require more modest foreign policy aspirations. But it’s unclear how much the United States would disengage from the world under an Independent America. Bremmer’s use of the Moneyball designation appears to stack the rhetorical deck against this option. The term was coined by journalist Michael Lewis and refers to the frugal approach to assembling a baseball team championed by the Oakland Athletics, but it has come to connote extreme stinginess. This option could just as easily have been called “Colin Powell’s America” or “Dwight Eisenhower’s America” and it would have had more rhetorical appeal.

My most fundamental criticism of this book is that Bremmer does not seem to adequately appreciate that while it’s relatively easy to design a coherent foreign policy in a PowerPoint presentation, or during a briefing for a CEO, or in a campaign speech or even in a book such as “Superpower,” actually implementing one is probably impossible. Global crises do not neatly fit into overarching strategies, no matter how well thought out or consistent they are. For the United States, which has such diverse interests and is endlessly barraged by complex and confusing challenges in real time, setting broad goals and operating flexibly and wisely is probably the best the nation can hope for.