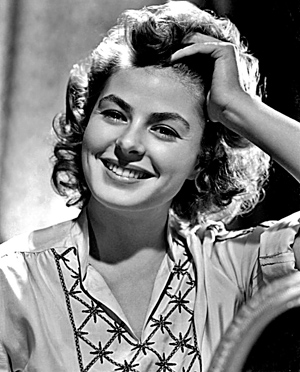 The saying has gotten a bit worn, but the song and film behind “As Time Goes By” haven’t. Time has certainly gone by, though, as the Swedish Embassy recently celebrated the 100th anniversary of the birth of Hollywood legend Ingrid Bergman. The award-winning actress, who died in 1982, remains ageless.

Bergman is best known for her iconic role as Ilsa Lund in the 1942 classic “Casablanca.”

But what happened beyond “Casablanca?” More than 50 films, three Oscars and an extramarital affair that caused a scandal and almost derailed her storied career.

The exhibit “Ingrid Bergman in Sweden!” covers the first years in the life of what many call Sweden’s national treasure and one of the world’s greatest actresses. The show runs until Dec. 6 at the House of Sweden. A second exhibit featuring 30 photographs, “The Saga of Ingrid Bergman,” ended in late September and presented Bergman as both beloved and controversial — a “role model and danger to her own time,” as the exhibit put it.

That’s because Bergman openly challenged her innocent on-screen persona — and the mores of the day.

Bergman, who was raised by relatives after both of her parents died, attended the Royal Dramatic Theater School in Stockholm for a year, during which time she made her professional stage debut. Her 1936 Swedish film “Intermezzo” caught the eye of American producer David O’Selznick, who helped her make the transition to Hollywood.

The angelic beauty married Swedish neurosurgeon Petter Lindstrom in 1937 and gave birth to a daughter, solidifying her good girl image.

But her affair with Italian director and screenwriter Roberto Rossellini and subsequent pregnancy with his son turned that wholesome paradigm on its head. The scandal tarnished her reputation in the U.S. and Bergman went into self-imposed exile to Europe with Rossellini, who became her husband after they both divorced their respective spouses. 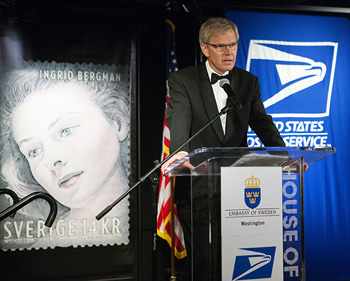 Swedish Ambassador Björn Lyrvall unveils a commemorative stamp in her honor as part of a Swedish Embassy retrospective marking the 100th anniversary of her birth.

She continued her film career overseas, eventually making a triumphant return to Hollywood in 1956 to star in “Anastasia” as the long-lost Russian princess.

Bergman won back her American acclaim and popularity with films such as “Murder on the Orient Express,” though she remained based in Europe for the rest of her life. She continued acting until she succumbed to cancer on her 67th birthday after a seven-year battle.

The exhibits at the House of Sweden — along with a related retrospective of her work at AFI Silver Theatre — ask what Bergman represents today. They also shine a spotlight on some of the lesser-known films from her homeland.

Jan Göransson of the Swedish Film Institute described how the idea for the embassy shows came about. “We thought that many of her Swedish films were forgotten by many,” he said.

When Göransson read Bergman’s biography last summer, he was also struck by the fiery spirit that defined her career.

“She loved to question all the directors she worked with,” Göransson said. “She had fights with some of them, including Ingmar Bergman [no relation]. We found that she from a very early age was very stubborn and had many innovative ideas about acting.”

Bergman was perhaps ahead of her time, which made her a force to be reckoned with. In 1946, when she was going to play Joan of Arc on Broadway, Bergman got angry when she heard that the theater was segregated, Göransson explained. She couldn’t break her contract but let her views be known in local newspapers. He also cited the example of the Swedish film “A Woman’s Face,” in which Bergman played a female gangster. The movie was released 77 years ago — in an era when gender equality was virtually nonexistent. 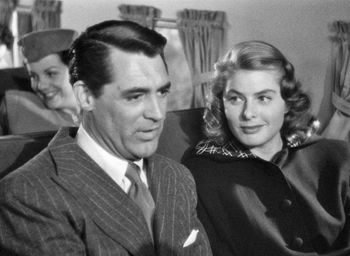 Ingrid Bergman, with and Cary Grant in “Notorious,” starred in more than 50 films throughout her long career.

“Have you ever seen a female gangster boss in one of Martin Scorsese’s movies?” Göransson pointed out.

Göransson described Bergman as a natural beauty who was the opposite of the stereotypical Hollywood diva. “She always walked her own way,” he said. “I think people today would think she has a lot of courage.”

In September, the Embassy of Sweden hosted a ceremony unveiling a commemorative Ingrid Bergman stamp and a “Hollywood Dance Party” celebrating her life. Swedish Ambassador Björn Lyrvall said Bergman forged the way for many women to demand respect in a male-dominated industry. “She is celebrated all around the world, because she was such a strong and independent person,” he said. Bergman’s daughter, Pia Lindström, was on hand for the stamp unveiling and to help tell the story of her mother’s life.

Annmari Kastrup, producer of the “Saga of Ingrid Bergman” exhibit, noted that the actress refused to change her name early in her career, keeping her Swedish-sounding moniker as a tribute to her homeland.

The Bergman exhibit has been shown in Sweden and Shanghai. “There were a great amount of people that saw the exhibition in Shanghai and remarkably many young persons, probably thanks to the great use of social media,” Kastrup said. “It has been a reawakening and a lot of young people know more about her now, thanks to all the articles and the new film ‘I Am Ingrid’ by Stig Björkman.”

For those interested in learning more about Bergman’s life, Kastrup recommended seeing her movies and reading her biography, “My Story.” It could be the beginning of a beautiful friendship.