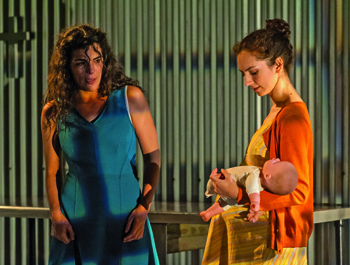 GALA Hispanic Theatre is looking back on 40 years of introducing Washington audiences to Spanish-language theater with the goal of moving forward to produce more modern plays.

“Hispanic American writers coming up now, who are tied to Latin America, are developing new work, and audiences in this country are wanting to see those new voices, many of whom are writing in English,” Executive Director Rebecca Read Medrano told The Washington Diplomat.

Medrano and her husband, Argentine-born Hugo Medrano, founded GALA in the 1970s at a time when D.C. wasn’t particularly known for its arts and culture scene — or for showcasing Latin culture specifically.

But they chipped away at the void, transforming a struggling theater troupe into an established Washington institution and moving into a permanent home in 2005. Today, Tivoli Theatre has anchored the revitalization of the Columbia Heights neighborhood and GALA has staged over 200 works from Mexico, Spain, Cuba, Peru, Venezuela and beyond.

First out of the gate, “Yerma” is an innovative and gutsy remake of an 80-year-old verse. The world premiere adaptation by Spanish writer Fernando J. López of the 1934 tragic poem by Federico García Lorca echoes with modern-day relevance.

The production, not for the faint of heart, is the graphic and often violent retelling of a woman named Yerma (which means “barren”) living in rural Andalucía who cannot conceive and is bound by a loveless marriage — and constrained by a repressive society. Her inability to have a child and her forbidden desires for another man contravened the mores of her time, but Lorca’s themes find surprising resonance today, examining the ongoing tension between motherhood and women’s roles in contemporary society.

Yerma is married off at a young age to a man she doesn’t know and doesn’t love. She lets family honor and duty stand in the way of leaving her husband and feels that without the ability to reproduce, she is useless to society.

Mabel del Pozo, from Madrid, throws herself into the title role of Yerma with pure abandonment yet emotional restraint, while Eric Robledo, a Mexican actor from New York, plays Juan, her peasant husband who is a slave to his limited opportunities and machismo stereotype.

Yerma’s world is a stark one, poetically mirrored by the stage she inhabits. Silvia de Marta’s set, which represents Yerma’s house and immediate surroundings, is sparse. A bathtub, what looks like a hospital examining table and a few empty crates serve as the home’s interior. On the perimeter, a wide swath of red mulch represents Juan’s world. Christopher Annas-Lee’s dramatic lighting paints Yerma’s world in black and white, with enveloping darkness, intermittent blinding lights and crisp shadows.

Even de Marta’s costuming conveys a world of contrasts, with Yerma in a pastel summer dress and Juan’s controlling sisters in head-to-toe faceless black burqas.

The theme and premise of “Yerma” are intrinsically histrionic. “Exploring García Lorca is like exploring an open wound,” writes director José Luis Arellano Garcia. Nevertheless, the play throbs of hyperbole, while the acting and direction are high pitched with little relief. To be fair, this could be an unintended consequence of turning a poem — meant to relate one, clear message — into a script that often needs more variety to stay balanced. 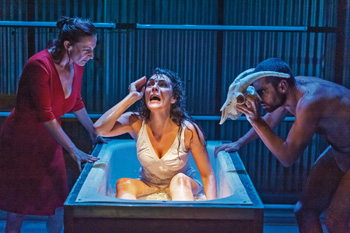 Director Garcia describes his intention to empower “each word, each gesture and each glance” with “pain, fear, fragility and power.” And what the play lacks in subtly it more than makes up for in passion and intriguing symbolism.

Images of earth (often the symbol for fertility) and water (rebirth) appear again and again — in actual physical form on stage and in the language. Yerma is barefoot and so in constant contact with the earth that she recalls going outdoor just to feel her bare feet on the ground, while Juan works the earth in the fields, ironically able to fertilize them and not Yerma. At the same time, red, dusty earth abounds on the stage and throughout the play. Juan kicks it up, throws himself on it in anguish and tussles in it with Yerma.

Yerma also acknowledges the need for water and its absence in her life. She tells Juan to go to the river and swim or go to the roof when the rain drenches it. By contrast, Yerma tells Victor, another farmer to whom she is attracted, how when he sings, it is “like a torrent of water fills his mouth.” Meanwhile, she frequents the bathtub where she swirls her arms in water and, at the play’s end, totally immerses herself in an effort to become fertile.

It is with these poetic gestures that the play stands for more than just Yerma and her struggles and becomes universal in its references to human longing for the things that give us life.

As for the rest of the season, GALA is trying something different this year, said Rebecca Medrano. Neither production manager Artemis Lopez nor Hugo Medrano will direct.

“This year all major productions will be directed by outside directors,” she said. “We want to expand and incorporate new directors and bring back those who have directed for us in the past.”

GALA’s mission, since it was founded in 1976 in a small townhouse in Adams Morgan and now lives in the exquisitely refurbished Tivoli Theatre, remains the same, according to co-founder Hugo Medrano. That is “to preserve and promote Latino arts and cultures by producing classical and contemporary Hispanic plays, musicals and children’s theater, making quality bilingual theater education accessible to Latino youth, and building awareness of the richness and diversity of Hispanic performing art forms among non-Spanish-speaking public.”