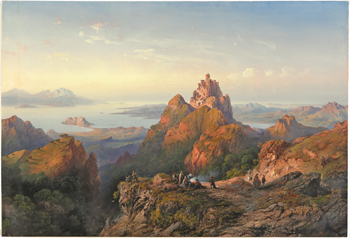 Among the 70 pieces in “From Neoclassicism to Futurism: Italian Prints and Drawings, 1800-1925” is Carlo Bossoli’s “Balaklava.”

Despite being an artistic force that shaped history, Italy has always had a hard time defining itself as a cohesive political and cultural entity. The country experienced greatness and upheaval in both realms.

The burden of its cultural legacy was probably most pronounced during the 19th century, when Italians struggled to find a common aesthetic and political identity in the wake of various European takeovers, revolution, war and turbulent social change, which seemed at first to leave Italy both in thrall to and hamstrung by the glory of its artistic past.

That past included the heights of the Roman Empire as the center of Western civilization, the devolution of warring city states that quarreled throughout much of the Middle Ages, and the glorious vanguard of the Renaissance that produced icons still worshiped today, from Michelangelo and Machiavelli to Leonardo da Vinci and Galileo.

In the 19th century, Italy would revolt against its occupiers, become a kingdom and unify, and early in the 20th century, embrace some of the modernist tendencies in art while descending into fascism politically.

Art seemed to take a backseat. But it’s front and center in “From Neoclassicism to Futurism: Italian Prints and Drawings, 1800-1925,” an exhibition at the National Gallery of Art that also showcases the gallery’s bid to build a collection of 19th- and early 20th-century prints and drawings. 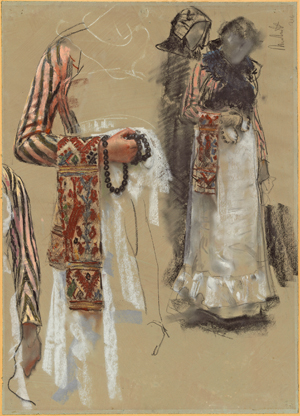 “Italian art of 19th and early 20th centuries included certain groups whose names still resonate — like the Macchiaioli and the futurists,” said Earl A. Powell III, director of the National Gallery. “But unlike its European neighbors, especially France, the newly forming country did not have a common style, much less one that developed according to the conventional history of modern art. Italian art had its own varied forms, distinctive life and development.”

Indeed, there are few if any household superstars in this exhibition — except perhaps for the incomparable work of Giorgio Morandi, a modernist artist whose drawings of cups, containers, glasses and vases almost defy the often stupefying work of the futurists. The futurist movement, which sprouted in Italy, tried to find meaning in a chaotic, meaningless time, emphasizing speed, technology, letters, numbers and sounds that were almost made visible in dynamic paintings and drawings. The works seem to be a road map to surrealists like Salvador Dalí, without his strange darkness or puckish sense of humor.

Almost all the way to the midway point of the 19th-century, you could still feel the longing for the past in the works of Italian artists, who made prints of drawings, assayed watercolors of scenes that echoed bygone eras, and molded bust-like representations of famous figures in classicist themes.

This exhibition of some 70 prints, drawings and illustrated books is divided into three sections. The first examines that longing for the artistic traditions of past that continued to be advocated and taught by academies in Italy. But about halfway through the century, something new was happening. Alongside the political ferment, Italy became affected by new styles and ideas that gave way to a period of romanticism and an individualistic approach to art reflected in the different parts of the country where it flourished: Turin, Milan, Rome and Naples. Finally, the coming of the 20th century — and Italy’s costly, traumatic participation in World War I — gave birth to the futurist movement and the seeds of modernism.

But in all three sections, anomalies occur, and there is real pleasure to be had in some of the individual works that blur boundaries. There are drawings that have the characteristic squiggly style of the century, but conversely there are etchings that seem absolutely drenched in dusk sunlight, such as Giberto Borromeo’s “Forest on Lago Maggiore.” There are captivatingly simple drawings such as “Dante Flees the Wild Beasts and Meets Virgil,” women striking alluring poses in etchings such as “Intoxication,” a watercolor of a mysterious Moorish soldier and other exotic, enigmatic portraits, such as Giovanni Boldini’s visually bewildering “Whistler Asleep.”

With France as a global center of art, especially Paris, artists there embraced impressionism and strands of it, along with a singularly different vision. There’s little sign of that in this exhibition. Italians were listening to something else, the Latinate visions of old Rome and Greece, perhaps. They still admired Caravaggio’s Virgin Mary and Child and drew the work with a precision that seems to adopt and heighten the grace of the original.

You may not recognize many of the names in this show, but the journey through the exhibition is one of discovering an underappreciated slice of Italian history, in which artists were buffeted by the past and its memory while searching for a new vision of the future.

From Neoclassicism to Futurism: Italian Prints and Drawings, 1800-1925

through Feb. 1
National Gallery of Art
on the National Mall between 3rd and 9th Streets at Constitution Avenue, NW
For more information, please call (202) 737-4215 or visit www.nga.gov.