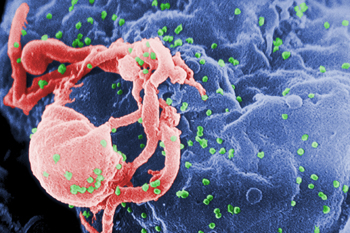 The transformation of a disease that was a death sentence less than 20 years ago into a manageable chronic disease has brought with it what health experts call a “great problem to have”: People with HIV/AIDS are living long enough to acquire other chronic diseases of aging, like cardiovascular disease, kidney disease, dementia, osteoporosis and other health conditions that can pose special challenges when they occur alongside an HIV diagnosis.

“This leads to a lot of challenges that we never thought we’d see,” said Anthony Luna, an executive vice president with the specialty pharmacy company Aureus Health Services, speaking at a pharmacy conference earlier this year. “HIV can increase the risk for, or worsen, certain conditions including osteoporosis, heart disease, dementia, insulin resistance and depression.

A scanning electron micrograph shows an HIV-1 budding (in green) from cultured lymphocyte.

Among about 12,000 people enrolled in HIV clinical trials between 1998 and 2008, only 10 percent died of AIDS-defining diseases, like certain opportunistic infections. More than twice as many — 21 percent — died of non-AIDS related cancers. It’s been noted that people with HIV are particularly at risk for cancers that are associated with infections, like Hodgkin’s lymphoma and liver cancer, and that they when they do get cancer, it tends to be more virulent.

Another 9 percent died of cardiac disease and another 9 percent of liver disease. HIV medications themselves, especially as they are taken over an accumulation of years, can also put people at risk for other diseases. For example, some common antiretroviral medications can have adverse effects on cholesterol levels, and others have been associated with an increased risk of heart attacks; some can damage the kidneys.

Other causes of death accounted for smaller percentages, but one — suicide — is particularly noteworthy because it was the cause of death for 5 percent of individuals (compared with just over 1.5 percent in the general population).

“The prevalence of depression is 20 to 40 percent in people with HIV, at least twofold higher than in the general population,” Luna said. “Depression also increases a person’s risk of acquiring HIV in the first place, and ups the likelihood of high-risk sexual behavior among those already infected. Being treated for depression effectively, on the other hand, improves a patient’s adherence to their antiretroviral therapy.”

Last year, after the deaths of several long-term HIV survivors — including activist Spencer Cox, who stopped taking his antiretroviral medications, and others who committed suicide — two longtime survivors, filmmaker Tez Anderson and HIV activist Matt Sharp, launched the San Francisco-based group Let’s Kick ASS. The grassroots organization was created to help people experiencing “AIDS survivor syndrome” who struggle with their long-term health and lives after years of expecting to die at any minute — and seeing many of their friends die during the height of the disease in the 1980s and ’90s.

Since its discovery in 1981, in fact, AIDS has killed an estimated 36 million people around the world. But an almost equal number of people — 35 million — are currently living with the virus.

Anderson himself was told by doctors that he would die in 18 months when he was diagnosed with HIV in the 1980s; his partner Gary died of HIV/AIDS complications in 1999. Anderson said he has struggled for two decades with depression, anger, anxiety, hopelessness and survivors’ guilt.

“In the beginning, everyone around me was dying,” he wrote on Let’s Kick ASS’s website. “It was a very trying time, but also very purposeful. We had a purpose keeping everyone as alive as possible. I was slow coming to grips with the possibility that I might survive. I could talk the talk as a survivor, but I never really internalized I would live.”

That has all changed with the advent of antiretroviral therapies, but Anderson says the battle isn’t over. “We hear about the end of AIDS, which is very well intended. But for the generation I belong to, we went through a war together. Just because the war is over doesn’t mean it has ended for us. We still need to heal and to optimize our lives.”

Anderson told the San Francisco AIDS Foundation’s BetaBlog that he’s seen many survivors “wanting to connect after being disconnected for a long time. There was a period there when the meds got better and people stopped dying and we all just retreated to take a deep breath, and now it’s time to pop our heads out of the sand and look around and say, ‘What’s next?’”

To that end, Let’s Kick ASS hosted its first “survivor summit” this past June and aims for a much bigger event on June 5, 2015. “I hope on June 5 and the rest of the year you’ll find ways to seek out survivors and listen to them,” wrote Anderson in POZ magazine, which chronicles the lives of people affected by HIV/AIDS. “Do not just accept ‘I’m fine’ when you ask, ‘How are you?’ Listen to them. Acknowledge that they’ve come through the fire but they can dream and be happy.”