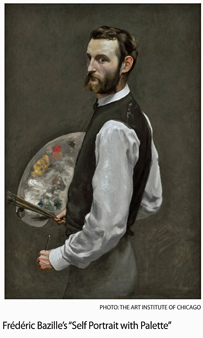 At one of the most exciting moments in the history of art, a group of young painters met and worked together in France, developing a new modern movement reveling in light and color.

A member of that innovative cohort has been largely forgotten, but an exhibition at the National Gallery of Art is seeking to put the spotlight back onto one of impressionism’s early pioneers with “Frédéric Bazille and the Birth of Impressionism.”

“The joke I always tell every time I mention this exhibition is that I either hear one of two things — either, ‘I’ve never heard of him’ or ‘I absolutely love his art,’” curator Kimberly A. Jones told The Washington Diplomat. “There’s no in between. If they know his art, they love it and they respond to it.”

Bazille was creating paintings that helped lay the groundwork for the 19th-century art movement alongside friends such as Claude Monet, Pierre-Auguste Renoir and Alfred Sisley, but his own career was tragically cut short. He decided to enlist in the French Army a month after the outbreak of the Franco-Prussian War and died in combat that year before he turned 29. Bazille’s life as an artist spanned just a few years, but during that time he created works infused with a spirit of experimentation and imbued with vibrant colors.

The show’s rooms are dedicated to various subjects, from landscapes to flowers to his contemporaries. Bazille’s unique understanding of light is highlighted, particularly the work resulting from his turn at the age of 23 to the idea of “painting figures in the sun” — depicting modern people in landscapes that he painted in the open air.

According the National Gallery, Bazille’s paintings were inspired by contemporary life and challenged aesthetic conventions of the day, laying the groundwork for impressionism. This is the first major exhibition of Bazille’s work in the United States in 25 years and brings together a wide variety of portraits, realist landscapes, nudes and still life paintings by the artist and his contemporaries. 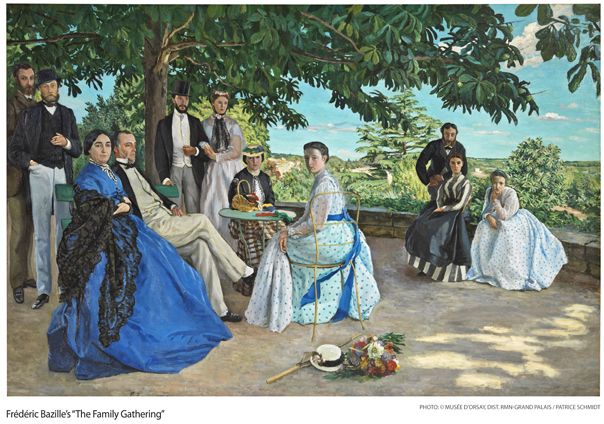 The D.C. venue marks the show’s final stop, after stints in France at the Musée Fabre and the Musée d’Orsay. Jones said the project came about after the National Gallery was approached by the Musée Fabre to partner for a show timed to the 175th anniversary of Bazille’s birth last year.

“I’ve been wanting to do a Bazille show for many years and you can only do it in partnership with the Musée Fabre because they have the largest holdings by the artist,” Jones said. “It was a perfect situation.” 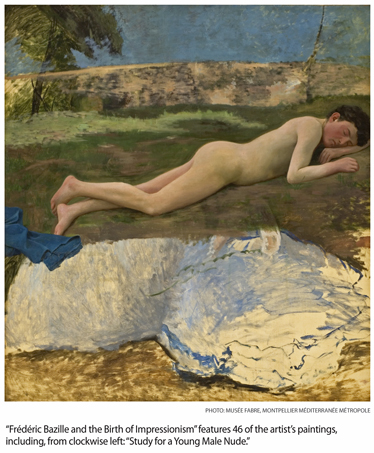 From there, the two museums also partnered with the Musée d’Orsay in Paris. The artist, from Montpellier, France, where the Musée Fabre is located, had never before been the subject of an exhibition in a French national museum, Jones noted.

“Bazille finally had that moment of triumph at a big state museum in France,” she said. “And then, here at the National Gallery, also a national museum, gives him another really broad stage.”

The three museums, along with conversation studios in the U.S. and France, also undertook a significant scientific and conservation study of Bazille’s paintings in connection with the exhibition, and Jones added that it will continue after the show ends.

“We knew there were a couple of other hidden compositions out there,” Jones said. X-raying Bazille’s work led to the discovery of a number of hidden works, such as “Young Woman at the Piano,” which had once been thought to be lost or destroyed.

One of the most fascinating paintings in the show is his 1870 “Study for a Young Male Nude.” The painting gives some insight into his artistic process, but it is quite jarring — visitors will see it is made up of two separate and strikingly different images. One is a scene of two women outdoors, while the other is of a nude male reclining, painted directly on top of the previous composition. Only the skirts of the original are still visible from his first effort. But the later 1870 painting was left unfinished. 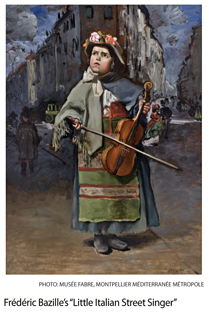 This show in D.C., Jones said, “really puts this artist front and center.” Seeing Bazille’s work so comprehensively is usually only possible at the Musée Fabre, which holds most of his works. Otherwise, for museumgoers, “he never really gets to shine in a way. He’s always just another lovely painting in a gallery,” Jones said.

This show offers a rare chance for Washingtonians to step into Bazille’s world, according to the curator.

“The last time there was a retrospective on this scale was 25 years ago in Brooklyn,” Jones said. “To get an exhibition like this — with 46 of his roughly 60 paintings — it’s going to be a long time before this happens again. The Musée Fabre had to close two whole galleries to make this happen. And it’s going to be really hard to get them all together again, so this is a special moment.”

Frédéric Bazille and the Birth of Impressionism