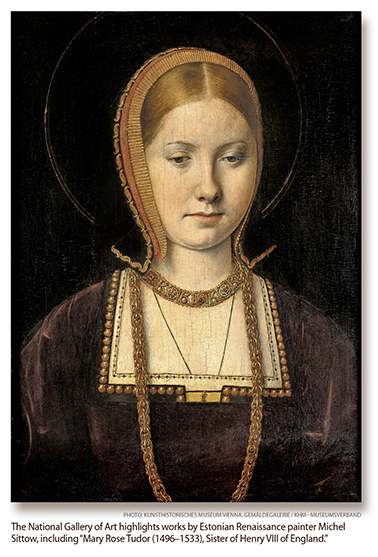 To celebrate the centennial of Estonian independence, the National Gallery of Art takes an even longer view of the country’s history by examining the work of painter Michel Sittow, considered Estonia’s greatest Renaissance artist. Schooled in early Netherlandish art, he was often sought after by European royalty of the day such as King Ferdinand of Aragón and Queen Isabella of Castile.

“The genesis, or inspiration if you will, comes from the fact that Michel Sittow is the finest Renaissance artist to come from Estonia and this was a perfect way for our two museums to celebrate the centenary of Estonian independence,” said John Oliver Hand, who curated the exhibit along with Greta Koppel, curator of Dutch and Flemish art at the Art Museum of Estonia in Tallinn.

The exhibit, which features some 20 works and brings together most of the artist’s 13 known paintings, provides a rare opportunity to examine a key figure of 16th-century Netherlandish art, whose name had largely been forgotten until being rediscovered in the early 1900s.

Visitors will also see Sittow’s possible collaboration with Juan de Flandes on a series of small panels depicting the lives of Christ and the Virgin Mary for Queen Isabella, as well as his relationship with Netherlandish contemporaries and the influence of Hans Memling, who was most likely Sittow’s teacher.

Hand said Sittow has a universal appeal in that his technical skill coupled with his outstanding ability as a portrait artist, which was essential for a court artist at the time, offer visitors vivid insights into the human condition. This is seen in portraits such as “Mary Rose Tudor (1496-1533), Sister of Henry VIII of England,” whose melancholy, almost blank facial expression contrasts with the subdued yet vibrant colors that bring the noblewoman to life. This subtle mastery of color, light and texture is seen in several other portraits of men who wear equally dour but lifelike, almost relatable expressions.

Although Sittow lived in Reval, now the Estonian capital of Tallinn, for over half his life, he moved to Bruges in 1484 where he presumably apprenticed under Memling, that city’s leading painter. Much of his life is unknown and few works have been definitively attributed to him. “Portrait of the Danish King Christian II” is one of the few pieces by Sittow that is both firmly dated and in which the sitter’s identity is confirmed. X-rays revealed another portrait, possibly of Roman Emperor Charles V, underneath the painting, suggesting that Sittow reused his panels. 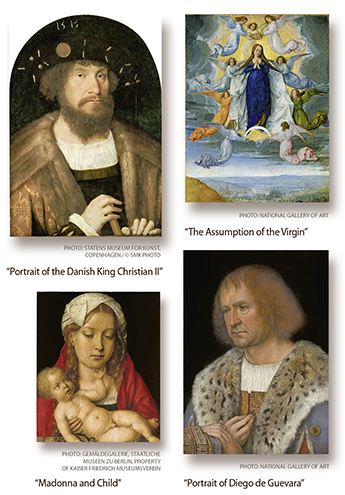 Another highlight of the show are two full-length paintings of Christian saints and the Virgin and Child that come from a Passion altarpiece in Talinn and mark the only works from the Art Museum of Estonia in this particular exhibit, according to Koppel.

“The work has not yet unanimously been accepted as an autograph work by Sittow but now at the exhibition, seeing the panels cleaned from dirt and later varnishes and also side by side with other accepted works, I would say they’re most likely his,” Koppel said. “The exhibition gives the audience a chance to decide.”

The altarpiece has been in the same church, St. Nicholas in Tallinn, for almost 500 years (except for a short trip to a shelter during World War II).

Both Hand and Koppel noted that one of their favorite pieces in the exhibit is the portrait that most likely depicts Don Diego de Guevara, a Spanish courtier and ambassador. “This work characterizes at its best the uniqueness of Sittow’s art, from one side his mastery in depicting different materials, his very detailed and fine painting technique, but what’s even more striking is the psychological character that he manages to capture,” Koppel said.

Pairing up with the National Gallery of Art was what Koppel called “a case of most fortunate coincidence.” When curators in Tallinn started to toy with the idea of organizing such an exhibit, they put together an advisory board.

“Only some days after the meeting in Tallinn, Peter van den Brink [a member of the advisory board] accidentally met John Oliver Hand in the Netherlands and told him about the meeting,” Koppel said. “John was immediately interested, as the collection at the National Gallery of Art holds two major and best-known works by this artist,” Koppel explained, noting that Sittow’s talent and elusive backstory have piqued historical interest.

Hand thereafter presented the joint exhibition draft to his own board of trustees. His knowledge and expansive experience at the museum lent the idea credibility and gave rise to the first monographic exhibition of this enigmatic Estonian.

Michel Sittow: Estonian Painter at the Courts of Renaissance Europe