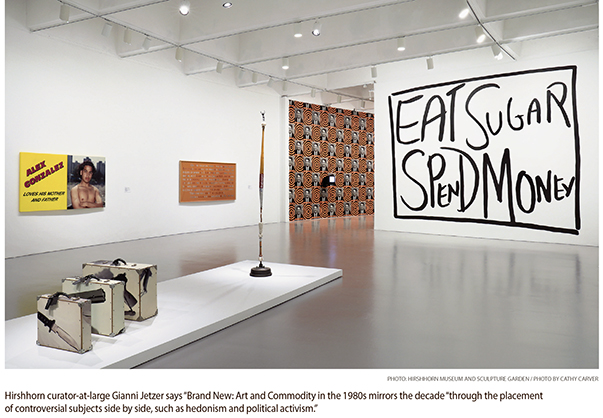 For many of us, it’s hard to believe that the 1980s are now considered a historical decade. It seems as if just yesterday we were sporting permed, puffy hair, oversize shoulder pads and preppy polo shirts with upturned collars.

It was a time of MTV pop music videos, yuppies, Reaganomics, the Cold War, Wall Street materialism and a culture seemingly built around me, me, me. But the ’80s also marked a fundamental shift in the art world, where artwork was considered a commodity and the artist became a brand to be marketed and sold to avid consumers. 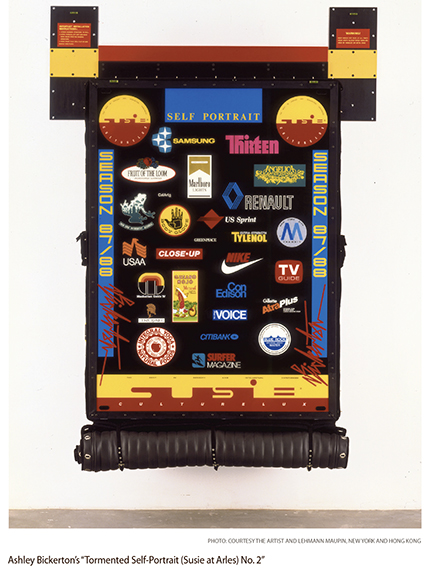 The Hirshhorn Museum celebrates this decadent decade in all its neon glory with “Brand New: Art and Commodity in the 1980s,” an evocative time capsule of a show that examines the rise of a new generation of artists in New York City who blurred the lines between art, entertainment and commerce, a trend that continues in contemporary art today.

The exhibit showcases nearly 70 artists, both known and relatively unknown, and almost 150 rarely displayed works from U.S. and European collections, together for the first time since the ’80s.

“It was such an ambivalent decade with pop and consumer culture being the new mainstream, spread widely by cable TV, and then again by the growing anxiety about a nuclear attack, financial crises or AIDS,” he said. “The complexity of the decade is mirrored in ‘Brand New’ through the placement of controversial subjects side by side, such as hedonism and political activism.”

“Brand New” is a particularly vivid show, with a kitschy product advertisement feel punctuated by an undercurrent of satire and rebellion. “‘Brand New’ introduces an alternative view of the ’80s, tracing how a pioneering group of young artists in New York appropriated the tools and psychology of the decade’s pervasive commercial culture, especially advertising, branding and manufactured objects,” according to a museum press release. “Fueled by radical changes in politics, the economy and technology, they exploited the growing culture of consumerism to redefine art’s position within it.”

Jetzer hoped to present the ’80s as a decade that is still relevant to this day. It was a time when the information age began to fully develop. “From then on, the message became the relevant commodity,” he said. “It’s all about creative ideas and what they stand for — that applies equally to advertisement and art.” 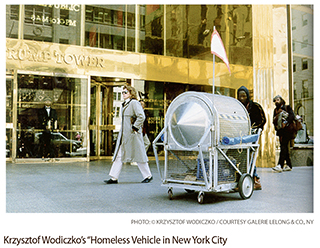 That modern-day relevance is most starkly seen in Krzysztof Wodiczko’s “Homeless Vehicle in New York City,” which depicts a steel-looking contraption that he created to conceptualize the marginalization of people. The scene shows a homeless man pushing the wheeled metal cart behind a smartly dressed businesswoman as they both walk by the gilded front entrance of Trump Tower. This glimpse of wealth and power — and pointed reference to Trump — juxtaposed with the image of a poor, ragged black man is just as powerful, if not more so, today than it was 30 years ago.

Jetzer is particularly fond of Gretchen Bender’s “Dumping Core,” a 13-monitor video installation with an upbeat soundtrack. It hasn’t been shown in three decades. Bender, a D.C. artist, developed logo animations for television stations in New York and also created art by recycling bits and pieces of commercial material to deconstruct and demystify the use of computer-generated graphics. She called the pioneering installations “electronic theater,” which Jetzer said is a truly groundbreaking invention. 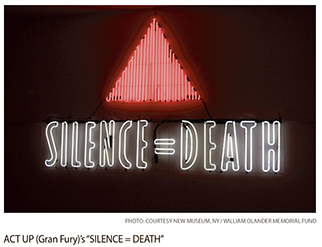 Other noteworthy pieces include Ashley Bickerton’s “Tormented Self-Portrait” showing a collage of product logos from Fruit of the Loom underwear to Marlboro cigarettes. In an MTV “Art Break” video spot, Richard Prince shows himself as a tongue-in-cheek “art world’s best-kept secret.” And the neon sign by ACT UP that reads “SILENCE=DEATH” in the lobby of the Hirshhorn mimics many shop signs but a more in-depth reading reveals it was a call for New York to face the HIV/AIDS crisis head on.

Jetzer’s next project will be curating a second chapter of his focus on contemporary art and consumerism called “What Absence Is Made Of” on the third floor of the Hirshhorn. The exhibit, which begins in October, spans more than seven decades and 70 works to explore how artists express what absence looks like and how it transcends the limits of our material world. “Now that a D.C. cocktail bar acknowledged the curatorial concept by creating a menu inspired by the show, I better make it nice!” he quipped.

Brand New: Art and Commodity in the 1980s