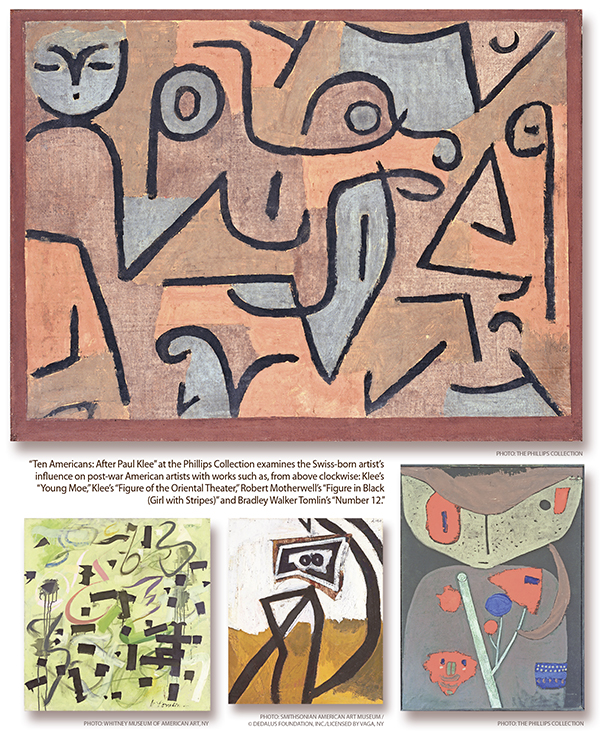 Color and whimsy meld together brilliantly at the Phillips Collection’s exploration of the pivotal role played by the Swiss-born German artist Paul Klee in post-war American art.

“Ten Americans: After Paul Klee” takes as its focal point the transatlantic exchange of ideas, themes, colors and imagery that emerged in the works of several American artists who embraced Klee as an inspiration and example.

As a creator of so-called “degenerate” avant-garde art, the Nazis purged Klee’s work from Germany’s museums and the artist fled to Bern, Switzerland, with much of his art traveling to the United States. There, Klee’s style, which included examining indigenous cultures, the power of symbolic language and nature’s invisible forces, resonated with American artists — particularly abstract expressionist and color field painters — who were searching for a new form of expression. What his fellow artists generated after coming into contact with Klee — through his art, ideas, writings and those who knew him — is the spark behind this show.

“There’s never been an exhibition that brought Klee’s work into dialogue with American art and probed his influence in a deep and meaningful way,” curator Elsa Smithgall told The Washington Diplomat, noting that the Phillips in 2006 hosted a show, “Klee and America,” solely filled with the artist’s own works. “Certainly, that set the stage for why Klee was so important in post-war American art. This exhibition builds on that.”

The Phillips has long been instrumental in introducing Klee to American audiences, with founder Duncan Phillips acquiring his first piece by the artist in 1930, “Tree Nursery,” a mix of rainbow-colored bands and stick figures that visitors will see on display in the show. Over the next two decades, Phillips brought a dozen of Klee’s pieces to Washington, and in 1948 the museum placed the artist’s works on display in what became known as the “Klee room.” Artists like Gene Davis and Kenneth Noland, two of the 10 featured in this show, were Washington-based and frequented the spot for inspiration.

“That aspect of our history made it all the more meaningful for us to want to continue to tell this story,” Smithgall said.

Yet “Klee hasn’t gotten his due,” she added, and he remains a very “understudied figure,” particularly in the context of his impact on American art. Along with Davis and Noland, the gallery selected William Baziotes, Adolph Gottlieb, Norman Lewis, Robert Motherwell, Jackson Pollock, Theodoros Stamos, Mark Tobey and Bradley Walker Tomlin to round out the 10 artists. The show displays more than 60 works from collections in the U.S. and Switzerland.

“This is not necessarily exhaustive,” Smithgall said. “We’re hoping to open the door and stimulate more discoveries. I’m sure more artists will come out of the woodwork; there may be more to learn. That’s always the hope. I don’t think this is a closed book. It’s at a really exciting, early stage of discovery.”

The show highlights the connections between the artists and Klee, with rooms showcasing the shared symbolic elements, patterns and colors that the American artists responded to from their European counterpart. Particularly effective to the exhibition’s thesis are the quotes scattered throughout the show, like Motherwell’s comment that “one of my natural talents that I don’t use enough in painting is line and paint both. I guess the closest example, though he does miniatures compared to what I do, is Paul Klee.”

The Swiss Embassy served as a key partner for the Phillips, and Smithgall noted she was “really grateful” for Ambassador Martin Dahinden and his wife Anita’s work in support of the show. One important aspect of that collaboration will be seen on April 26, when the museum brings two Swiss musicians, in association with the embassy, to perform a program of music that is both inspired by Klee and filled with classical music he himself enjoyed.

The show, with spindly, otherworldly lines interspersed with explosions of paint and color, is overwhelmingly permeated with a sense of playfulness, particularly in the pieces that explore animal imagery. Throughout the gallery, the various works from the array of artists feel in conversation with one another, laid out carefully to maintain the dialogue that existed for the American artists themselves, with lines speaking to lines, paint to paint, across canvases.

“It’s about this moment of transatlantic exchange in the art world,” Smithgall noted. “I think it’s a real testament to the power of cultural diplomacy to look at this moment back in the 20th century, when you do have the art of Paul Klee inspiring so many American artists in the country. Why? Because they see the power of his message as one that is transcending national boundaries. They’re seeing ideas that Klee is bringing forward that resonate very much with them, as Americans.”