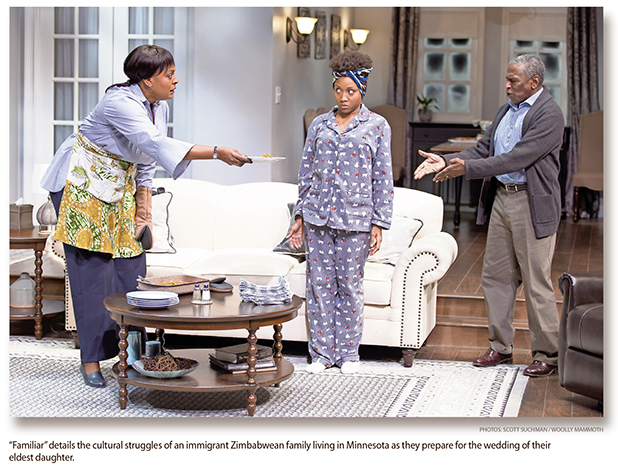 The thoughtful dialogue and plot outline the serious, and sometimes farcical, tensions between what it means to assimilate in America and wrestle to maintain true to one’s native roots — in this case immigrants from a poor African nation who have reinvented themselves as bourgeois Minnesotans.

During one cold Minnesota winter, our immigrant Zimbabwean family prepares for the wedding of its eldest daughter. But when the bride insists on observing roora, a traditional bride-price ceremony akin to a dowry, it opens a deep rift in the household.

The script smacks of authenticity in its cultural references, language, accents and customs as it almost mimics Gurira’s autobiography — she was born in Iowa to Zimbabwean parents, then raised in Zimbabwe and moved back to the U.S. for college before her thespian career took off. She’s now starred in the popular AMC television series “The Walking Dad” and has a role in the big-screen “Black Panther” film.

The play’s moniker, “Familiar,” explores the notion of what is family and what is familiar, and whether the two always intersect. As one can guess from Gurira’s reputation for pushing the envelope, they do not. Family members’ definitions of lineage and loyalties clash, as do their meanings of comfort in life’s familiarities, whether they be ethnic or not.

However, the play’s overall genuineness falters due to a lack of depth among Gurira’s characters. Although individually compelling — such as the stubborn, strong mother who denounces her heritage; the rebellious, artsy daughter who’s trying hard to reclaim her ancestors’ past; and the do-gooder daughter who’s caught in between — they ricochet off each other like pinballs in a machine, walloping the other with seemingly hard blows, but without making as much as a dent. Although witty and warm-hearted as a whole, the characters’ emotions stay too much in their own lanes, unaffected by each other’s wishes and pains, only fighting desperately with their own. This dynamic continues for most of the play and changes only with a plot twist, but by then the damage has been done. Their lack of empathy for each other rubs off on the audience, who, in turn, is reticent to care too much for any of them.

A few of the characters have breakout moments when their emotions are visceral, but those feelings aren’t carried seamlessly throughout and, at times, almost take the audience off guard.

Perhaps the strongest of these powerful moments is delivered by the family’s matriarch, Aunt Anne, played by Cheryl Lynn Bruce, who has just arrived from Zimbabwe to orchestrate her country’s marriage ritual for her niece, Tendi. Tendi is engaged to wed Chris, a white Christian lawyer. Without spilling any spoilers, Anne offers a powerful monologue that uncovers the reason for her insistence to bring Zimbabwe’s importance into Tendi’s life. Her speech comes at the play’s climax, which she handles with power and grace. 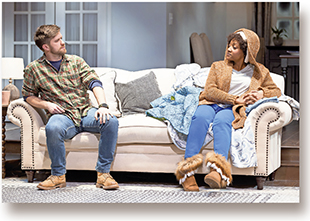 The production of “Familiar” continues Woolly Mammoth’s love affair with Gurira. Her prior plays have been serious studies of strong women characters navigating tales of survival.

“In the Continuum,” which played at Woolly in 2006, she profiled the twin stories of a Zimbabwean and an American woman as both learned they were HIV-positive. “Eclipsed,” which premiered at Woolly in 2009 and ran on Broadway in 2016, focused on a group of young Liberian women held captive by the rebel army during their country’s civil war. “The Convert,” seen at Woolly in 2013, portrayed the tragedy of a young woman in colonial Rhodesia who converts to Christianity.

Unlike Gurira’s other plays, “Familiar” is deemed a comedy and succeeds to elicit raucous laughs from the audience who recognize family drama as ripe material. Marvelous, the mother, played by Inga Ballard, insists on mocking Tendi’s adopted Christianity by referring to her “happy-clappy churches;” while her mild-mannered husband, Donald, played by Kim Sullivan, who longs for Zimbabwe, continuously hangs its map on the wall when Marvelous isn’t looking, and then, of course, she takes it down every time.

But Aunt Anne, again, is the scene stealer as she commands compliance and tests the patience of all involved as she plops down in full, bright African garb (seemingly to get on Marvelous’s last nerve) and painstakingly insists that Tendi’s fiancé and brother crawl across the floor while clapping (according to African ritual, she says) to offer her monetary fees for the bride, as is customary in traditional Zimbabwean weddings. The fees, which she produces from her bosom on a scrap of paper, are a combination of cows and modern American dresses for her. “What else is the white man good for?” she implores in her defense.

As expected, the plot turns more serious as it evolves and the play ends on a solemn note.

By and large, Gurira’s attempt to blend comedy with her usual weighty international subject matter is a success, judging by the audience’s reactions. Perhaps it’s her first attempt at such a feat that has thrown her mojo off a bit and it will just take more practice at the genre before the varying parts completely mesh.