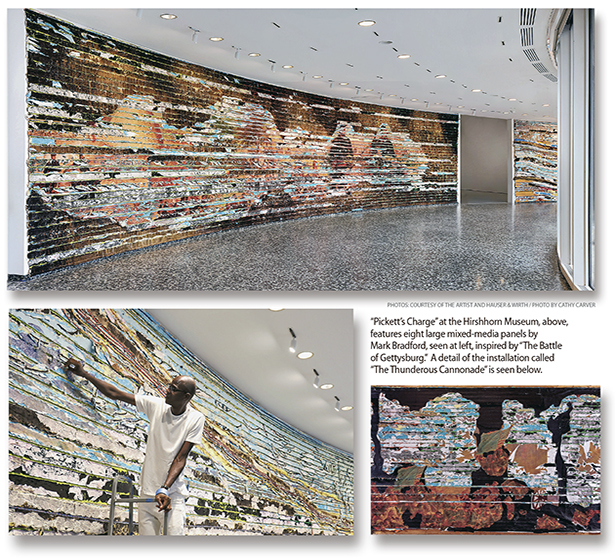 History textbooks have a way of glossing over tragedy and confining the truth inside neat timelines and orderly rows of facts and figures.

But history is messier and bloodier than that, especially during the Civil War when a young nation was nearly torn asunder, leaving deep wounds that still haven’t healed more than a century and a half later. The Civil War, and the racism and hatred that triggered it, is still claiming victims today in angry and sometimes fatal clashes over the removal of Confederate monuments across the country.

Mark Bradford confronts this tragic legacy at the Hirshhorn Museum in his largest work to date. “Pickett’s Charge” features eight mixed-media panels, each more than 45 feet long, stretching in a massive panorama across the entire inner ring of the museum’s third floor. The work was inspired by “The Battle of Gettysburg,” the epic 1883 cyclorama by French artist Paul Dominique Philippoteaux that depicted Pickett’s Charge, the final ill-fated Confederate attack led in part by Maj. Gen. George Pickett that ended with a decisive defeat for the Confederacy from which it never recovered.

Philippoteaux interviewed survivors and reconstructed scenes of the battlefield with a photographer before painting his truly staggering work, which was two stories tall and 279 feet in circumference. The painting was displayed in a special circular theater with a foreground of real trees, stone walls and fences to create a tableau so lifelike that some veterans of the battle wept when they saw it. The tourist attraction was so popular that Philippoteaux was commissioned to create a second even larger cyclorama that is now on display at the Gettysburg National Military Park.

In “Pickett’s Charge,” Bradford depicts some of the battle scenes shown in Philippoteaux’s cyclorama, but the lifelike realism and historical precision have been shattered and peeled back to reveal tattered layers and uncertain story lines. In his massive Los Angeles studio, Bradford and his assistants used thick layers of paint, colored paper, bungee cords and other materials to create abstract, thickly textured paintings that were then scraped, gouged and torn. Those violent gashes and tears rip through our illusions about the famous battle and the glorification of war.

In one panel, a once valiant battlefield scene looks like cheap peeling wallpaper in a house destined for destruction. Only dark shadowy fragments of two soldiers on horseback are visible on another panel, creating an ill sense of foreboding about whether they are friend or foe or just mysterious apparitions. Across the eight winding panels, the neat and tidy historical narrative of Pickett’s Charge has been demolished, and the facts and figures won’t fit in their narrow rows any more.

In Philippoteaux’s cyclorama, visitors could stand on a central platform and turn in a full circle to see the grand sweep of the illusory world surrounding them. In the Hirshhorn, the entire installation can’t be seen at any one place or time. Visitors must walk around the museum’s unique circular architecture, with one panel appearing ahead as the previous disappears behind. The beginning and end are lost, mirroring our collective history. What lies ahead can’t be seen and what lies behind has been forgotten or misremembered.

The deconstruction of history in “Pickett’s Charge” alludes to the ever-present danger of delusion and the disguising of blatant lies as “alternative facts,” as President Donald Trump and his apologists demonstrate on a daily basis. In the debate over the Civil War, history has been twisted and the facts ignored as some people convince themselves that the bloody struggle wasn’t really fought over slavery but for some nobler pursuit of “states’ rights.” As a nation, we are still slaves to our own dark imaginations, and the lies we tell ourselves persist across generations and beyond hope or reason.