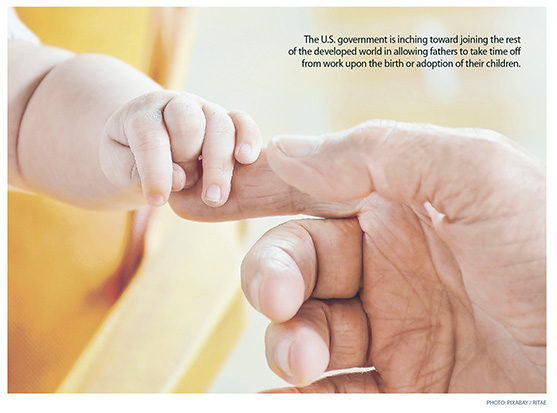 The U.S. government is inching toward joining the rest of the developed world in allowing fathers to take time off from work upon the birth or adoption of their children without a loss of income — a policy that would not only help growing families, but also help mothers re-enter the workforce and benefit the economy as a whole.

In this, the United States stands alone among developed countries. Among 35 members of the Organization for Economic Cooperation and Development (OECD), a grouping of democratic countries that support free market economies, all nations from Australia to Mexico to Slovakia offer some form of paid maternal and home care leave, except for the U.S. The OECD average is about 37 weeks of paid leave for new mothers. Far fewer countries offer paid leave for fathers, with the OECD average at seven weeks.

During his 2016 campaign, and as president, Donald Trump has said he supports the idea of paid family and medical leave. In his January 2018 State of the Union Address, he said, “Let us support working families by supporting paid family leave.” And in his most recent budget proposal, he called for states to create six weeks of paid leave for both mothers and fathers. But finding the money to fund the initiative could face resistance among voters if it raises payroll taxes, and it also faces an uphill battle in Congress, where Republicans are wary of more government spending.

Some states such as California and New Jersey offer their own leave benefits, and many private businesses, especially large tech companies, offer paid leave to retain employees, though the benefits tend to go toward high-income workers. But there is no federal policy mandating paid leave.

Isabel Sawhill, a senior fellow at the Brookings Institution, said there was a growing realization among family policy researchers that children of heterosexual couples benefit emotionally and developmentally from having their fathers at home.

In the United States, “the idea that workers should receive paid leave for different purposes has broad public support, with 82 percent favorable toward paid maternity leave [and] 69 percent toward paid paternity leave,” according to a joint study by the Brookings Institution and the American Enterprise Institute (AEI) titled “Paid Family and Medical Leave: An Issue Whose Time Has Come.”

“Paid family leave affects children and families, it affects women’s ability to participate in the labor market, and it affects economic growth. Recent research suggests that when compared to other countries in the [OECD], women’s labor force participation in the U.S. has stalled, and nearly a third of the gap can be explained by the lack of family-friendly policies such as paid leave,” the study said. “If women are unable to continue their careers because their workplaces are less accommodating of their need for time off, this limits their ability to remain in the labor force and move up the income ladder. This is not just an issue for women, but for families as a whole, as women are now the primary breadwinners in more than 40 percent of all families, according to the Pew Research Center.”

However, it says, “a substantial gap remains between the leave benefits available to mothers and those available to fathers.”

Most OECD countries allow “a little less time for fathers,” said Aparna Mathur of AEI, who co-authored the study with Sawhill.

A 2015 study published in the Scandinavian Journal of Economics found that allowing paid paternity leave “greatly increases the share of men taking paternity leave. We find evidence that children’s school performance improves as a result, particularly in families where the father has higher education than the mother.”

Giving fathers paid leave to spend time at home with their children is also seen as a matter of fairness; the work of feeding and bathing babies, changing their diapers, taking them to doctor’s appointments and so on is not left entirely to the mother.

“By drawing fathers into the daily realities of childcare, free of workplace constraints, extended time off provides the space necessary for fathers to develop the parenting skills and sense of responsibility that then allows them to be active co-parents rather than helpers to their female partners,” says a 2013 study by Youngstown State University professor Erin Rehel.

Paternal leave entitlements are not limited to developed countries.

“Paternity leave entitlements can be found in the national legislation of at least 79 countries out of 167 for which data are available,” says a 2014 report by the International Labour Organization (ILO). 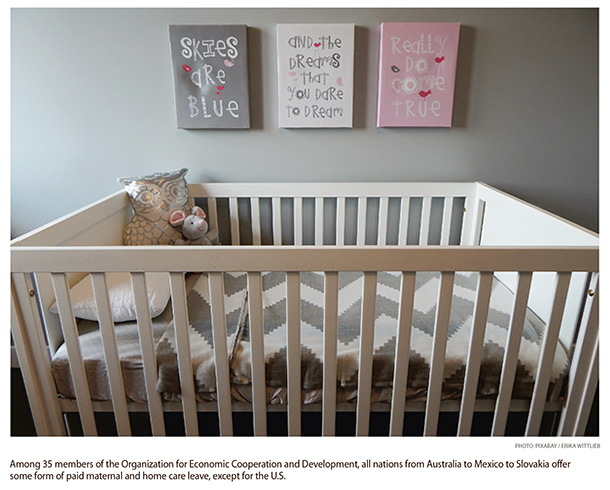 Norway and Sweden are among the most generous developed countries in terms of paid paternal leave. In Sweden, parents are entitled to 68 weeks of paid parental leave when a child is born or adopted (at about 80 percent of the parents’ income), with 12 weeks of paid leave reserved exclusively for fathers that cannot be transferred to the mother. As a result of its child-friendly policies, Sweden has one of the highest birthrates in Europe, especially among highly educated women.

Similarly, Norway allows fathers to take 10 weeks off from work to care for children and still earn 97.9 percent of their income (along with 78 weeks for the mother, with a little less than half her income guaranteed).

Japan and South Korea are the most generous in the amount of paid leave time they give new father — 52 weeks — but fathers only earn 58.4 percent and 32 percent, respectively, of their working income. That is in keeping with an international trend: the more leave time one takes, the less s/he earns in monthly benefits.

In Canada, parents can take 18 months of paid leave after childbirth and mothers can start taking maternity leave up to 12 weeks before the birth. During the first 12 months of post-natal leave, parents earn 55 percent of their working wages or $543 (Canadian) per week, whichever is higher. The benefit applies to the parents’ combined income, so there is one check for both parents.

As for financing, in 58 percent of the 79 countries that provide for paternal leave, the employer pays the entitlement, according to the ILO.

“It’s pretty common, I think, to have employers and employees contributing” to the parental leave benefit, Mathur said.

The U.S. president’s daughter, Ivanka Trump, has been working with Sen. Marco Rubio (R-Fla.) and others on a proposal that reportedly would impose no costs on employers or taxpayers; leave-takers would support themselves by drawing money from their Social Security accounts. A father who takes, say, eight weeks of paternal leave would then have his eligibility for Social Security benefits postponed for eight weeks after he retires.

Mathur said other countries had varied ways of paying parental leave benefits, but “I’ve never heard of a situation” similar to what Trump and Rubio are considering.

Rubio has also floated the idea of offering businesses a 25 percent tax credit for giving employees at least four weeks of paid leave.

The question of whether the United States will join the rest of the developed world in offering paid maternal and paternal leave will ultimately rest in Congress’s hands, as Congress would have to authorize it via legislation. And that, in turn, will depend in part on lawmakers’ appetite for increased federal spending following major tax reform and a two-year budget deal that is projected to balloon the national deficit — not to mention the outcome of the November 2018 midterm elections.