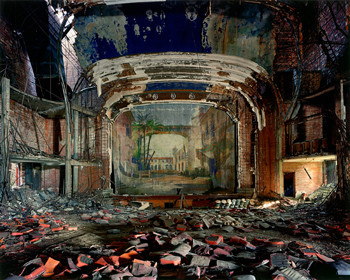 Two exhibitions at the National Gallery of Art showcase the evolution of photography. Art such as Andrew Moore’s “Palace Theater, Gary, Indiana” are part of an exhibition on memory and time.

In 1989, the National Gallery of Art staged a monumental and powerful exhibition on photography as art with curators Sarah Greenough and David Travis filling the venerable West Building with hundreds of black-and-white and color photographs, not to mention nearly 300,000 admirers who turned out to view the exhibition.

It was called “On the Art of Fixing a Shadow: 150 Years of Photography” and all the greats were there: Paul Strand, Alfred Stieglitz, Walker Evans, Dorothea Lange, Ansel Adams and literally over 200 more.

And here we are again at the National Gallery, 26 years after that groundbreaking exhibition, with another landmark display — and Greenough, now senior curator and head of the department of photographs, exploring the beauty, nuance and legacy of photography.

The current exhibitions, which sit adjacent to each other, appear on the surface to be a little like two siblings in a wildly eclectic but passionately caring (and sometimes argumentative) family. The kids were of a generation eager to strike out on their own and venture away from their loving but querulous homestead. 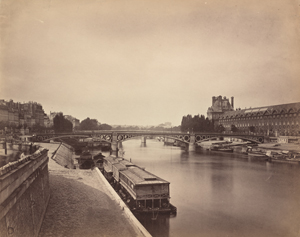 Gustave Le Gray’s “The Pont du Carrousel, Paris: View to the West from the Pont des Arts,” highlights some of the most illustrious holdings in the museum’s collection.

“In Light of the Past” features some 175 of the collection’s most exemplary holdings and illustrates the evolution of photography as art, from its birth in 1839 with the invention of the negative-positive process of photography to the 1970s. “The Memory of Time” highlights 76 works by international artists, on display at the National Gallery for the first time, who examine the medium’s relationship to time, memory and history.

Despite the differing focus, the two exhibits are about process and ambition — the yearning to discover something new while establishing photography as a means for artistic discovery.

Echoes of this desire for innovation, whether in the 19th century or the 21st, could be heard in “On the Art of Fixing a Shadow” — in Julia Margaret Cameron’s haunting, almost post-Victorian faces, or the garish faces of Brassaï’s Parisian nightlife, or the visually searing work of masters like Alfred Stieglitz and Edward Steichen.

After the 1989 show, the National Gallery led by Greenough enlarged its photography holdings, founded the Department of Photographs and put on a series of exhibitions that showcased many of the individual talents in “Fixing a Shadow.”

“In Light of the Past” resembles a primer on the greatest hits from “Fixing a Shadow,” a sampling of “some of the rarest and most compelling photographs ever created,” as National Gallery of Art Director Earl A. Powell III put it in a press release.

The photographs in both shows helped to establish photography as a respected art form, but their present-day association with the term “establishment” belies the revolutionary, pioneering spirit of these images. These were daring photographs taken by artists who experimented with new techniques.

Here, light, shadow and perspective intermingle to produce arresting masterpieces. Even the still lifes capture an untamed energy, perhaps a reflection of the photographer’s desire to capture fleeting moments in time and make their movement permanent. Blurry photographs, whether purposeful or accidental, are like ghosts running out the door — a determined effort not to fix the shadow, but to assist in its escape, in its alteration.

Photographers often altered the results of their work in the dark room, and not even the most honest, documentary image contains the picture’s entire backstory. But there are stories behind all of these photographs that prompt us to wonder what’s beyond the frame.

The art of photographic manipulation has entered a new digital age of Photoshopping that allows us to construct and deconstruct reality, an evolution that’s on display in “The Memory of Time.” The sectioning of this remarkable exhibition reveals its obsession with the intangible concept of time: “Traces of History”; “Time Exposed”; “Memory and Archive”; “Framing Time and Place”; and “Contemporary Ruins.”

Scattered throughout the sections, visitors find lessons on how to deal with the effects of time. Photographer Sally Mann — who has made a career out of capturing the changes among her own growing offspring — epitomized the exhibit when she said, “Time, memory, loss and love are my artistic concerns, but time, among all of them, becomes the determinant.”

From Carrie Mae Weems’s portraits of young African American girls in flower-patterned dresses that evoke the pastorals of Manet and Renoir, to Binh Danh’s dark, mysterious photograph of a victim of Cambodia’s genocide, these intricately shot photographs are meditations on the past, present and future — and their impact on the full spectrum of humanity.

Other photographers are more interested in ruination, rust and residue, such as Andrew Moore’s “Palace Theater, Gary, Indiana” or Moyra Davey’s remarkable rumination on the simple penny in a series of up-close and beyond personal takes on Abraham Lincoln’s copper visage, worn out by ruin and time.

These two exhibitions trace the immensity and breadth of photography and the changes that will continue to redefine the medium. It’s a conversation in which the National Gallery of Art is well versed: Since the 1989 “Fixing a Shadow” exhibit, the museum’s collection of photographs has grown to nearly 15,000 works.

The family keeps getting bigger, and it looks like the kids are all grown up.


In Light of the Past: Celebrating 25 Years of Photography at the National Gallery of Art

The Memory of Time: Contemporary Photographs at the National Gallery of Art