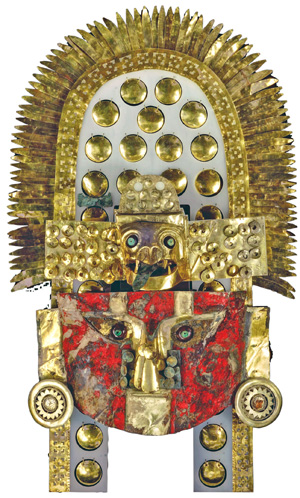 The Inca Empire, the largest empire of the pre-Columbian era, arose in the Peruvian highlands in the early 13th century and continues to fascinate historians and archeologists today.

But Peru was also home to a wealth of culture and civilization long before the Inca, and the remnants of that golden past have been dug up in archeological finds over the past half-century.

“El Tocado,” a gold headdress from the Sican period (750-1350) that is the largest and most ornate pre-Columbian headdress ever discovered, is the centerpiece of the exhibit “Peruvian Gold: Ancient Treasures Unearthed.” Other highlights include a deity mask, bimetal nose ring, as well as a beaded pectoral and diadem.

The exhibit’s centerpiece, “El Tocado,” is the largest and most ornate pre-Columbian headdress ever discovered. Like many of the other pieces in the show, it is being displayed in the United States for the first time.

All of the items — from an intricately beaded pectoral to a whimsically decorated nose ring — hint at the sophistication and complexity of Peruvian craftsmanship that reigned centuries ago.

The exhibit also provides context and insights into one of the earliest Andean civilizations, revealing the rituals, customs, beliefs and symbolism that shaped the artwork on display.

Peruvian Ambassador Harold Forsyth and his wife María Verónica were on hand at the National Geographic Museum for the festive opening on April 10, as were officials from the three Peruvian institutions that loaned nearly 100 objects to the museum.

“Peru has a long history of cooperation and partnership with the National Geographic Society, which dates back to the early years of the institution,” the ambassador said. “National Geographic has been involved in many of the most important Peruvian archaeological findings to date and has always been a dependable partner, managing to properly portray the image of Peru beyond its borders.”

In fact, the National Geographic Society has funded more than 180 grants related to exploratory field research in Peru since 1912. Its fruitful relationship with Peru began with the iconic magazine’s coverage of Hiram Bingham’s excavation of Machu Picchu in 1911.

That 15th-century Inca site, perched atop a mountain ridge above Peru’s Sacred Valley, remains one of the world’s most stunning archeological discoveries, attracting millions of tourists over the years.

Among the guests at the opening night of “Peruvian Gold” was Abigail “Abbie” Bingham Endicott, granddaughter of the great explorer. “My grandfather loved Peru’s culture so much,” she told the crowd.

“The partnership between National Geographic and Peru, which this ‘Peruvian Gold’ exhibit represents, first began with my grandfather and the excavation of Machu Picchu little more than a century ago. As you probably know, no gold was found at Machu Picchu, but this ‘Peruvian Gold’ exhibition features treasures from earlier times and other places in Peru that are fascinating,” she said. “My grandfather was always proudest of having been an explorer. He certainly instilled that love in me and his other descendants.”

That love of adventure and uncovering new cultures, both past and present, is the impetus behind National Geographic, whose magazine has been published continuously since 1888, nine months after the National Geographic Society itself was founded.