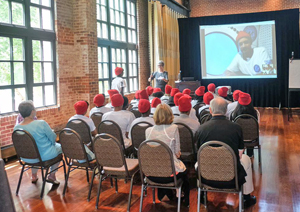 In 1964, ocean explorer Jacques-Yves Cousteau embarked on what then seemed an impossible mission: to spend 30 days underwater, living in a manmade habitat in the Red Sea. Fifty years later, his grandson, Fabien Cousteau, is attempting to break that record by spending 31 days on the Aquarius laboratory in the Florida Keys on a habitat 30 feet deeper than his grandfather’s. This expedition, known as Mission 31, commenced on June 1.

Among Mission 31’s sponsors is the Ritz-Carlton, and on June 13, the hotel’s Georgetown location hosted two dozen students from its Succeed Through Service program for an interactive Skype session with Cousteau, allowing a rare glimpse at life under the sea.

Fabien Cousteau Skypes with local middle school students on June 13, allowing them to glimpse the underwater Aquarius habitat on which he will be stationed for a total of 31 days.

Succeed Through Service is one of the Ritz-Carlton’s Community Footprints programs, all of which are concerned with social and environmental responsibility.

“We work with schools to inspire the students to remain in school and to help bring relevance to what they’re learning in the classroom,” Vice President of Community Footprints Sue Stephenson told The Washington Diplomat. “Every one of our 86 hotels around the world adopts a school. We bring them to our hotels to really inspire them that ours is a wonderful industry.”

Launched in 2009, Succeed Through Service has worked with over 15,000 students worldwide. The program aims to teach life skills, social skills, healthy eating, teamwork collaboration and civic responsibility, among others. Recently, the Corporation for National and Community Service recognized Succeed Through Service as the most robust and comprehensive national youth mentoring program.

The students attending the Mission 31 event hailed from Cardozo Education Campus in Washington, D.C., and Kenmore Middle School in Arlington, Va. Prior to the event, they worked with modules focusing on environmental issues to understand their impact on the planet. These lessons were a buildup to meeting the Mission 31 team, who are studying the effects that climate change, pollution and overconsumption of resources are having on the planet’s oceans.

“Every time I go out there, I realize how connected we are in ways I haven’t thought of before,” Cousteau said, referring to the daily dives from the Aquarius habitat. At the time of the Skype session, he and his team had been underwater for 12 days. “We’re all trying to survive on this planet; we’re all trying to live together, work together.”

Before Skyping with the Mission 31 team, the students, grades six through eight, received an oceans pre-lesson in which they learned about the challenges of surviving under water; the technologies that allow extended dives; the legacy of Jacques Cousteau; and the unique nature of Aquarius, which is one of three remaining and functional underwater habitats. 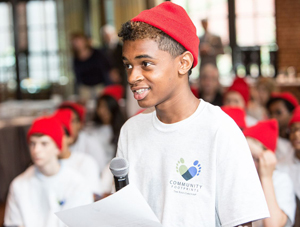 After an oceans pre-lesson and some opening remarks from Cousteau, students were invited to ask him questions, which ranged from “What is the most interesting thing you have discovered?” to “What do you eat?”

In addition to conducting ample research while submerged, Cousteau and his team are devoting a large portion of their time on Aquarius to conducting educational outreach, made possible thanks to Wi-Fi technology that extends below the sea. Cousteau explained that a line connects the habitat to a buoy with an antenna, which beams Internet communications back to land.

“I remember a conversation with [my grandfather] when he was dreaming of the day when he could talk to the world live from underwater,” Cousteau said. “He was very much a futurist and a forward-thinker, but the technology just wasn’t quite there yet.”

The Aquarius laboratory is about the size of a school bus, measuring 43 feet long by nine feet wide. For 31 days, this small space is playing home to nine aquanauts, including cameramen, mission scientists and specialists. Aquarius is a pressurized environment; the team will be decompressed to surface pressure only at the end of the mission. Returning to the surface before decompression could be fatal.

“The safe haven for us is the habitat,” Cousteau said. “We cannot go back up to the surface; that’s not an option. We need to change our mindset … and resist the urge to go back to the surface.”

This form of submersion, known as saturation diving, has undeniable benefits beyond breaking records: The researchers are able to dive for many more hours per day than they would if they had to return to the surface after each dive.

“We’re able to work very efficiently from down below, which is the biggest advantage of living on the final frontier,” Cousteau said. 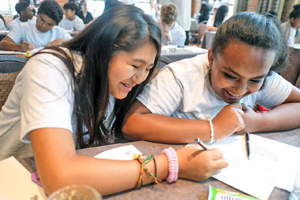 The event was a part of the Ritz-Carlton’s Succeed through Service program, which works with schools to inspire and educate young students.

Throughout the Skype session, the students from Cardozo and Kenmore were able to ask Cousteau many questions about life under the sea. The event coincided with the end of their academic year. As students graduate middle school and go on to high school, Stephenson explained, it can be hard for Succeed Through Service to maintain contact.

Cousteau also addressed the students’ futures, emphasizing their significance in the fate of the planet and its oceans.

“At the end of the day, the reason we’re doing this is because I believe that you are the future,” he told the students. “You are the hope for our planet.”

Miranda Katz is an editorial assistant at The Washington Diplomat.