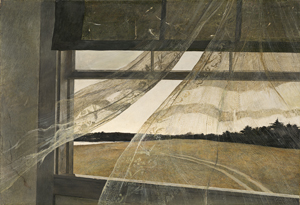 Walking through the tightly focused exhibition “Andrew Wyeth: Looking Out, Looking In” at the National Gallery of Art, one almost expects to hear the distant but distinct sound of rustling curtains, a gentle breeze tickling the grass, the flutter of birds or the squeaking of an old, cracked windowsill.

“Looking Out, Looking In ” is not only a title but also an invitation to do just that: peer out and into the world of the famed 20th-century American painter.

American artist Andrew Wyeth painted 300 window-themed works during his prolific career, including the landmark “Wind from the Sea,” above.

Windows are at the heart of this exhibit of some 60 tempera paintings (Wyeth all but abjured painting with oils), watercolors and drawings. The exhibition is rooted in Wyeth’s 1947 “Wind from the Sea,” donated to the National Gallery in 2009. The acquisition piqued the gallery’s interest in Wyeth’s obsession with windows and serves as a wispy, haunting springboard to the rest of the artwork on display.

Although Wyeth clearly had fascination with windows — he painted some 300 window-themed works during his long career — these paintings are not what you might expect from his oeuvre.

Wyeth (1917-2009) gained acclaim early on for his poetic, naturalistic realist paintings that captured the places and people of his native Pennsylvania as well as his summer escape in Maine — the rural landscape of Wyeth’s life.

His enduring masterpiece, “Christina’s World,” depicts a paralyzed woman lying awkwardly on an expansive green field, gazing at her faraway home in Cushing, Maine. Wyeth was reportedly impressed with the strength and stoicism of his neighbor Christina Olson, who refused to use a wheelchair.

Wyeth’s deftness for figurative paintings and capturing the character of his subjects helped to make him one of America’s most popular 20th-century artists.

Wyeth’s window paintings, however, are devoid of the human protagonists he often placed front and center in his spare landscapes. Yet his most iconic window rendering was indirectly inspired by his best-known figurative work. Wyeth was working in the Olson House featured in “Christina’s World” when an ocean breeze wafted in and captured the artist’s imagination.

“That summer in 1947 I was in one of the attic rooms feeling the dryness of everything and it was so hot I pried open a window. A west wind filled the dusty, frayed lace curtains and the delicate crocheted birds began to flutter and fly,” Wyeth recalled.

He made a quick sketch of the scene and a few weeks later “Wind from the Sea” was born, becoming the defining work that launched 60 years of window paintings. The finished product resembles an elegy to a momentary emotion, sharply felt, as a delicate, transparent curtain flutters in the wind against the backdrop of a solitary footpath, furrowed fields and the dark skyline of trees outside. 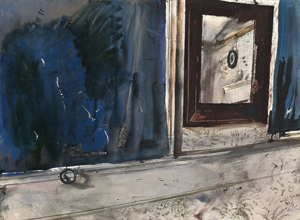 “Room in the Mirror, Study” is another one of Wyeth’s many works.

Wyeth’s windows are “deceptively realistic,” according to the National Gallery, which notes that the artist used multiple visual techniques such as different vantage points (inside, outside, ground level, upstairs) to create skillfully manipulated constructions.

Throughout the exhibition, one can almost hear Wyeth answer his critics — and he had his fair share — insisting that he was not merely an “illustrator” like his father was or a representational artist at a time when abstraction was all the rage.

Abstraction may have consumed high art, but Wyeth’s down-to-earth works achieved widespread commercial success, much to some critics’ chagrin. He worked almost laterally in the same firmament as the pre-eminent American abstract expressionist artists who shifted the balance of art’s power from Europe to New York. Amid that exciting parallel world, Wyeth’s paintings sold very well and must have seemed like a conservative affront to followers of Jackson Pollock, Mark Rothko, Willem de Kooning and the later kinetic wall-busters of the pop art scene led by Andy Warhol and Roy Lichtenstein. Many critics praised Wyeth, while others dismissed him, often with contempt, as if he were some finely tuned, more artistic version of Norman Rockwell (his earthy nudes certainly dispel that quaint association).

Although he was often labeled a realist painter, Wyeth preferred to think of himself as an abstractionist. He even said that “Wind from the Sea” was in fact a portrait of Christina Olson.

He makes an excellent case that his paintings are far more nuanced than they’re given credit for, up to a point. Much of what we see in the exhibition — variations on the theme of rooms and windows — amounts to a deconstruction. And abstraction plays on subtractions, taking things away until what’s left has morphed into an idea, as opposed to a factual rendering.

Wyeth subtly incorporates elements of abstraction into his work. The coats, wooden chairs and sleeping dogs that accompany his sparse windows suggest something larger. In the studies of rooms we see how details disappear in the final version and what’s left hints at the memory of a loss or the passage of time — a faint pattern of sunlight on a wall, apples past their due date, chipped paint on a window frame. The omnipresent window grid itself can be seen as an abstract pictorial device.

But whatever Wyeth’s assertions, these paintings don’t feel abstract. They are minimalistic and gauzy, but the work as a whole is framed by restraint, subtlety and, yes, realism. They are paradoxically full of both heightened emotions and a certain solitude that invites viewers to ponder the perspective Wyeth’s windows offer.

“I think most people get to my work through the backdoor,” Wyeth once said. “They’re attracted by the realism and sense the emotion and the abstraction — and eventually, I hope, they get their own powerful emotion.”

I’m not sure why Wyeth felt he had to call his work something that his peers might think was more serious than what he had done previously. His paintings proudly stand on their own, pulling us in and offering us a window into a carefully constructed world that is both real and imagined.

Andrew Wyeth: Looking Out, Looking In

through Nov. 30
National Gallery of Art
located on the National Mall between 3rd and 9th Streets at Constitution Avenue, NW
For more information, please call (202) 737-4215 or visit www.nga.gov.