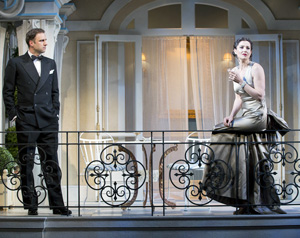 The quick-witted script, set in the 1930s, is great fodder for belly laughs, and this production is a polished gem, having been mounted with the same cast and crew in 2012 at Boston’s Huntington Theatre.

James Waterson and Bianca Amato star in the Shakespeare Theatre production of “Private Lives” as two bickering divorcees who rekindle their romance, much to the chagrin of their new spouses, played by Autumn Hurlbert and Jeremy Webb.

“Private Lives” (a sarcastic misnomer, because we end up knowing way too much about its characters) is sometimes described as a “plot-less play about purposeless people.” But it succeeds in its real purpose: to simply entertain while poking fun at the empty-headed worries of rich people.

The play’s unlikely premise is delightfully wicked. Upper-class divorcees Elyot and Amanda unexpectedly run into each other while honeymooning with their new spouses in the same hotel, in rooms with adjacent balconies, in southern France.

James Waterston, as Elyot, and Bianca Amato, as Amanda, are dynamic together. They played lovers Jack and Gwendolen in the Brooklyn Academy of Music’s “The Importance of Being Earnest” and their familiar, sizzling chemistry is apparent. Here, their characters’ narcissism and immaturity are gloriously well matched, whether they’re jabbing each other with accusations and insults or showering each other with excessive romantic gestures. 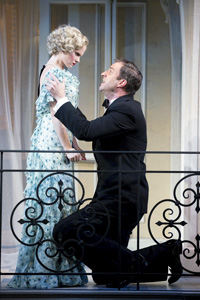 Act I sets in motion a perfect storm of bad manners. As one can guess, Amanda and Elyot’s codependent natures make them unable to resist rekindling their tumultuous relationship. Their affair flips into high speed and they shuck their newly formed wedding vows, abandoning their adoring spouses. The audience gets to watch the impending, inevitable train wreck. The more the characters squirm, the more thrilled we become.

By Act II, however, the playwright seems to run out of fresh material. Sequestered away in their love nest in Amanda’s Parisian flat, she and Elyot can’t make up their minds whether they love or detest each other. They alternately fling words of devotion and passion with hatred and venom back and forth like ping-pong balls to the point of tedium. They’re full of melodramatics and emotional antics, but Coward overplays this card, and after repeated use, it loses some affect. Although the play’s premise is one of folly, it still needs some believability.

This isn’t the fault of the actors, who are delightfully sassy and articulated, or a problem with the direction, by Maria Aitken, a Coward expert who has played more Coward heroines than any other actress, including Amanda in 1980 at London’s Duchess Theatre. The glitch, instead, appears to be inherent in the text. Amanda and Elyot are funnier in Act I as part of a foursome (don’t worry, Sibyl and Victor reappear in Act III) and one is left to wonder how the two lovebirds can honestly reach such heights of anger and adoration so many times within the span of half an hour. 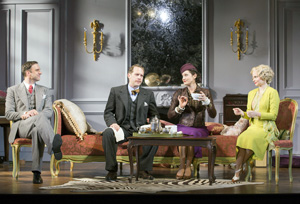 One aspect of this production that doesn’t tire is the remarkable and detailed period scenery and costumes. Set designer Allen Moyer, who was inspired by the French Fauvist painter Raoul Dufy (think of the vibrant colors and broad brushstrokes of Henri Matisse), conjures up a European visual masterpiece of moving sets that are as elaborate, lavish and whimsical as is the play’s rich dialogue. In fact, Moyer cleverly mounts two Dufy paintings prior to Act I and Act II. The first is of a harbor that the couples’ balconies could likely be facing, and the second is of a busy scene in Paris.

The costumes, thanks to the design of Candice Donnelly, are breathtakingly elegant. One wants a character to make another entrance just for the thrilling anticipation of what they will wear next. The women’s floor-length gowns, the men’s layered suits and even the leads’ silk pajamas are extravagant — in keeping with the characters’ lifestyle and behavior.

The scenery and costumes alone are enough to lure one to the Lansburgh Theatre. Then again, at the end of a long, cold winter and the start of what’s bound to be a typically long, hot summer in Washington, D.C., who doesn’t need to kick up their heels and just laugh?