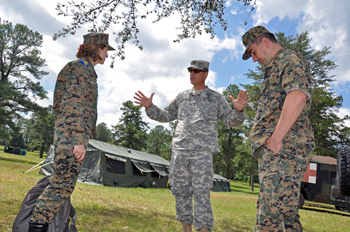 The Red Scare is no longer the main fear that drives U.S. foreign policy, but one important legacy of the Cold War lives on at the Defense Department’s National Guard State Partnership Program (SPP). It all started when Latvia, shortly after gaining its independence from the Soviet Union, approached the United States for guidance on creating a professional military. Now, 20 years later, it is one of 65 countries worldwide benefitting from the grassroots exchanges that are a hallmark of the SPP.

With the collapse of the Soviet Union and the dissolution of the Warsaw Pact, the United States wanted to reach out to the nascent democracies in Central and Eastern Europe to expand military-to-military contacts that promoted civilian leadership, democracy, market economies and human rights.

The Maryland National Guard’s 175th Infantry Regiment conducts its annual training with soldiers from Bosnia and Herzegovina at Fort A.P. Hill, Va., on June 11 as part of the National Guard State Partner­ship Program, which brings together U.S. states with partner nations to enhance international security and understanding. This year, Maryland is celebrating its 10th year being partnered with Bosnia and Herzegovina.

It seemed like a natural fit given that these nations were embracing democratic governance, but the United States had to tread carefully around Russia, which had just watched its empire collapse and wanted to maintain influence over its former satellites. How could these newly freed countries — most of which still had militaries resembling the Soviet model and traces of anti-NATO suspicions — make the transition to becoming U.S. allies in Moscow’s backyard?

“There were real risks that such a partnership could easily experience,” said Zekerijah Osmic, the minister of defense of Bosnia and Herzegovina, at a May 13 luncheon in Annapolis celebrating the 10th anniversary of his country’s partnership with the state of Maryland — a partnership that would have been inconceivable after the fall of the Soviet Union. “I could say that these two militaries at the time were more of a threat to each other,” Osmic said of his nation and the United States.

“The U.S. was trying to engage with the former communist nations that were in the Warsaw Pact, and using active duty troops might have been a little too offensive to the Russians or the folks that were in there, so the idea was to use the small footprint of National Guard troops,” said the former chief of international affairs for the National Guard Bureau, Air Force Brig. Gen. Aaron “Joey” Booher, in an interview with American Forces Press Service.

The National Guard is composed of citizen-soldiers — military reservists who mostly have full-time civilian jobs but can be deployed both at home and abroad. The use of National Guard troops to train Central and Eastern European forces also reinforced the model of civilian control over the military.

Managed by the National Guard Bureau and executed by individual U.S. states, the SPP is dedicated to promoting peace, stability, prosperity and democratic principles — and not necessarily in that order. It does not limit itself to military-to-military events. Though these are the bulk of the program’s activities, they serve as a catalyst for developing military-to-civilian exchanges and even civilian-to-civilian ties. Sister city programs have emerged as a result, and so have partnerships between universities. 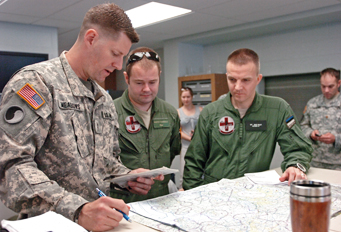 Pilots with the Estonian Air Force, who have been assigned to the Maryland National Guard for the past year, will be deployed with Maryland troops in Afghanistan.

“The program definitely helped Estonia to prepare for NATO membership. In the beginning, the focus to look mostly at the basic military trainings as assistance was just a one-way street for Maryland to Estonia,” explained Estonian Permanent Secretary of Defense Mikk Marran, who also attended the Annapolis luncheon, where he was joined by Maryland Gov. Martin O’Malley. That event honored the Maryland National Guard’s 10-year partnership with Bosnia and Herzegovina and its 20-year partnership with the Baltic nation of Estonia during that country’s transition to independence — its oldest collaboration yet.

“Today, the benefits are mutual. Looking at these developments, I can’t even imagine what the cooperation will be in 10 years’ time,” Marran said.

In 2011, the president of Bosnia and Herzegovina decided to take the Balkan nation’s participation in the SPP to the next level and designated a full-time liaison to cement the relationship with the Maryland Guard. The man chosen for the job, Lt. Col. Dzevad Buric, is now Bosnia and Herzegovina’s liaison to Maryland as well as the assistant defense, military, naval and air attaché to the United States. Serving a three-year term, Buric is the only one to hold the liaison position out of all the partnerships.

In this role, he divides his time between the Bosnian Embassy in D.C. and the Maryland National Guard, where he is an advisor to Maj. Gen. James Adkins, the state’s adjutant general. Buric’s duties include establishing stronger ties in sectors such as education, health care and the economy. The partnership played a significant role in helping Buric’s ethnically torn homeland stabilize after the breakup of Yugoslavia and the ensuing wars in the Balkans.

“Out of the 35 bilateral programs that Bosnia and Herzegovina has, the State Partnership Program is by far the strongest one,” said Buric. “Everyone’s so proud to be part of the program through any capacity — from the personal level of friendship to the institutional level,” he reflected on the merits of the SPP.

But the Department of Defense has not been spared from the sequester budget cuts that have slashed across-the-board government spending. The sequester would lop off about $50 billion from defense spending in fiscal 2014. Over 10 years, sequestration would require the Pentagon to trim $500 billion in spending — on top of previously agreed military budget reductions of $487 billion — cuts that Defense Secretary Chuck Hagel has called “draconian.”

“Resources are limited. A challenge will be maintaining the same level of budget for both sides,” said Buric. “We’d like to keep this level of program success despite any difficulties in budget.” 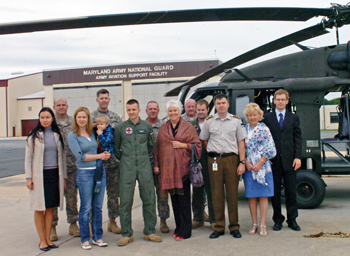 Slashing the program would also undercut the decades of trust that have gone into building the SPP, its supporters say.

Adkins, who has been with the Maryland Guard’s SPP since the beginning of its ties to Estonia in 1993, stressed the importance of forging good relationships: “We had to show we were there for the long term. There’s no top to the program — we can continue as long as there is a need. That’s the beauty of these partnerships,” said the major general, who in September will fly to Sarajevo to welcome home the 26 Bosnian officers that were deployed to Afghanistan last fall with the Maryland National Guard’s 115th Military Police Battalion.

The focus with the Bosnia and Herzegovina partnership is to clear the last few hurdles before the country can achieve NATO membership — the latest is its participation in the Membership Action Plan (MAP) whereby its application is reviewed by sitting members. The country has not yet met the requirements on defense property but, according to the Maryland National Guard, is well on its way to doing so. NATO integration is a foreign policy priority for Bosnia and Herzegovina — which remains sharply divided by ethnic tensions between Bosniak Muslims, Serbs and Croats — and its partnership with the Maryland National Guard could help it break into the NATO club.

SPP activities are designed with the guidance of U.S. embassies in the respective partner countries to keep them in line with broader objectives and needs.

“It wasn’t about teaching them how to do things or how they could teach us to do things. It was about sharing experience and expertise,” Adkins explained, emphasizing the value of solidifying relationships at each step.

For example, a new student exchange program has been created between Salisbury University in Maryland and Tartu University in Estonia.

“It’s not only about the military-military ties,” Adkins said. “The military relationships prime the pump for other ties. They’re a catalyst to fostering other exchanges.”