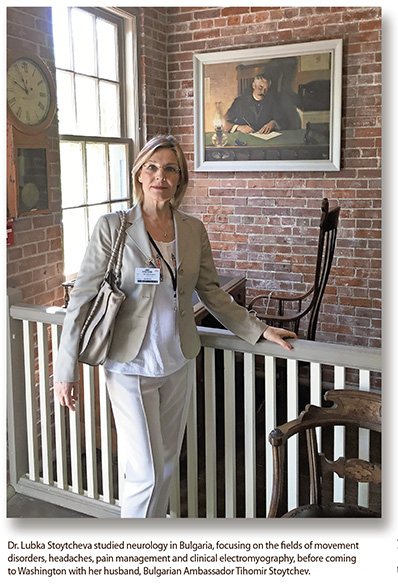 As she waved me into her big circular drive in front of the spacious home, wearing a radiant smile, I instantly got a sense of the bedside manner that Dr. Lubka Stoytcheva, wife of Bulgarian Ambassador Tihomir Stoytchev, probably exudes back home.

“Although this is our third time in Washington,” she told us, “this is the first time my husband is ambassador, anywhere.”

Tihomir Stoytchev, a career diplomat, most recently served as foreign policy secretary to the Bulgarian president. Before that, from 2008 to 2011, he was deputy chief of mission of the Bulgarian Embassy here in Washington, D.C., where he also was chargé d’affaires for almost 10 months. He served in D.C. on another previous stint from 2003 to 2007 as counselor for political and economic affairs during the time when Bulgaria became a member of NATO and the European Union.

It has been more difficult for Stoytcheva to further her career during their three tours in Washington. She is a neurologist but is not allowed to formally practice in the U.S. From 2003 to 2007, she was able to work as a health care specialist — but not a doctor — at the Neurology Center in Silver Spring, Md. This time around, she spends much of her time reading up on the latest research in her field, accompanying her husband to diplomatic events and hosting them at the residence. Her scientific affiliations are mainly in the fields of movement disorders, headaches, pain management and clinical electromyography.

She is also the mother of two grown sons, neither of whom followed their parents’ career trajectories, eschewing diplomacy and medicine in favor of business and technology. Svetoslav is 29 and works with a Baltimore bank. Anton is 26 and works in IT in New York City. Both studied economics.

“When we were in Brussels from 1996 to 2000, they were small, 4 and 7, and since Belgium is a French-speaking country, they learned French and English in school. Then when we went back to Sofia, they learned [Bulgarian].”

Stoytcheva and her husband actually met in high school. They were in the same class, spending four years together from 9th to 12th grade, although they weren’t high school sweethearts.

“He was always the smartest guy in our school. He made the best speeches,” she proudly recalled. “I hate to make speeches. That way we are an example of opposites attracting each other. We didn’t date in high school; we were just friends. For the senior prom, we all go separately.”

They may have gone separately to the prom, but that is where they began to take a romantic interest in each other, and from then on, they didn’t go their separate ways again.

Each did pursue separate career paths, although medicine was not Stoytcheva’s first choice. “I always wanted to be an architect even though it’s very tough and competitive. I liked math and drawing. One night when I was still in high school, my father and I were talking and he said, ‘You know, all the new buildings today are kind of the same. Would architecture be creative enough for you? Why not become a doctor?’”

They discussed the possibility, knowing that the field of medicine was more difficult to enter than dentistry or pharmacology. “My parents were pharmacists but my father told me that being a pharmacist was too much like being a salesperson. So I became a doctor,” she said.

“I studied medicine for six years and then had four more years of residency. From the first day on, I knew that I wanted to be a neurologist,” she told us. “It takes years to build up a private practice and with our traveling, it was impossible. I don’t know where I’ll be [working] when I go home, but I probably will be hired by a hospital. That’s what I did before.” 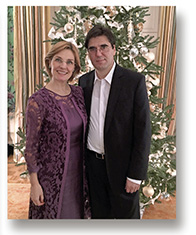 Stoytcheva said her homeland has a strong tradition of emphasizing the importance of education and work, which is ingrained at a young age.

“In Bulgaria, students go straight to graduate school. We don’t have four-year colleges,” she explained. “Everybody is expected to work in my country. We don’t have many unemployed Bulgarians or stay-at-home moms. We are raised with the idea that everyone should work, but it is not always easy for the diplomatic and military spouses to work abroad. We are allowed to work but it depends if special permission from home is necessary first.”

Now that Stoytcheva is taking a break from medicine, she has embraced her informal diplomatic role promoting her homeland.

“Bulgaria is one of the oldest states in Europe, having been established in 681. We are the only country in Europe that hasn’t changed its name since it was established,” she said. “My country is situated at the crossroads between Europe and Asia. Many cultures left their mark on this land,” she added, noting influences from the Thracian, Slavic, Roman, Byzantine and Ottoman empires. “As a result of this multicultural interaction, my country is very tolerant.”

The country came under Soviet control from 1946 until the fall of communism in 1989.

“At the beginning of the ’90s, Bulgaria started its unique process of transformation and transition [when the Eastern Bloc collapsed] from a one-party regime to a plural democratic system, from a state-owned economy to a free market,” she said.

The nation of over 7 million people has made dramatic advances since then, ushering in a period of steady economic growth with an open-market economy that is now classified in the upper middle-income range. The financial crisis of 2007-08 and subsequent belt-tightening took a toll on the economy, however. Bulgaria also still grapples with serious problems such as corruption, crime, a weak judiciary and reliance on Russia for its energy needs.

But growth recently returned thanks to sound fiscal management and an investment-friendly environment. Tourism in particular has been a major economic driver, as more people discover this hidden gem. 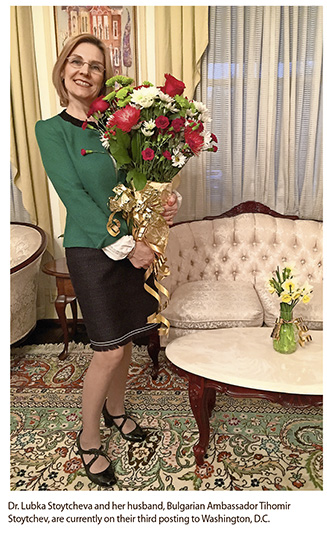 “Almost 100,000 Americans visit Bulgaria each year,” Stoytcheva said. “We have beautiful resorts on the Black Sea and over 50 spas and wellness centers with hot mineral waters and holistic health.”

In addition to its scenic destinations, many people may not be aware that Bulgaria is the largest global producer of perfumery essential oils such as lavender and rose oil. It also has a long tradition of winemaking.

“Wine has been produced on our land for over 5,000 years and Bulgaria is the only place where you can find natural ‘lactobacillus bulgaricus’ — live bacteria used to make yogurt. This probiotic product has been known for at least 4,000 years,” Stoytcheva noted.

She said Bulgaria also takes pride in its religious diversity and rich history.

“After Greece and Italy, Bulgaria has the most valuable artifacts and archeological monuments of any European country. Instead of castles, we have monasteries — over 120,” Stoytcheva said. “In our capital Sofia, in the downtown area, you can see two Orthodox churches in the Byzantine style built by Constantin the Great in the fourth century; an Eastern Orthodox cathedral; a Catholic cathedral; a synagogue; and a mosque. All of them are well preserved and functional. Different religious denominations have coexisted peacefully over the centuries.

“This year, we commemorate the 75th anniversary of the historic rescue of Bulgarian Jews,” she added. “In 1943, during the darkest times of the Holocaust, Bulgaria saved all its citizens of Jewish origin, numbering almost 50,000. Our Jewish community was the only one in Europe which not only survived during the war, but also increased its size. The critical role of the salvation was played by the Bulgarian Church, some intellectuals, members of Parliament and, most of all, the Bulgarian people.

“My country is also well known for its rich cultural heritage and traditions, and folklore music with its unique rhyme and dances,” she continued.

The embassy, in fact, hosts monthly concerts with the Bulgarian Music Society. This past May 12, “The Great Bulgarian Horo Washington 2018” concert was held at the Thomas Jefferson Memorial with more than 400 participants dancing together to traditional Bulgarian music.

Stoytcheva likes one tradition in particular: the holiday of Martenitsa.

“Every March 1, we welcome spring and celebrate the end of winter and snow by wearing and exchanging red-and-white thread bracelets,” she explained. “We wear them until we see the first stork in a flying position. Then, we take the bracelets off and hang them on a blossoming tree…. We have lots of storks in Bulgaria.”

Meanwhile, back in Washington, Stoytcheva goes to Crunch Gym’s Barre Bootcamp several times a week and enjoys walking and biking with her family. “It’s nice to meet new people and learn about their problems and what else is going on in their lives. When I say I’m from Bulgaria and tell them a few things about my country, they are often surprised. They say, ‘I knew nothing about Bulgaria before I met you.’”