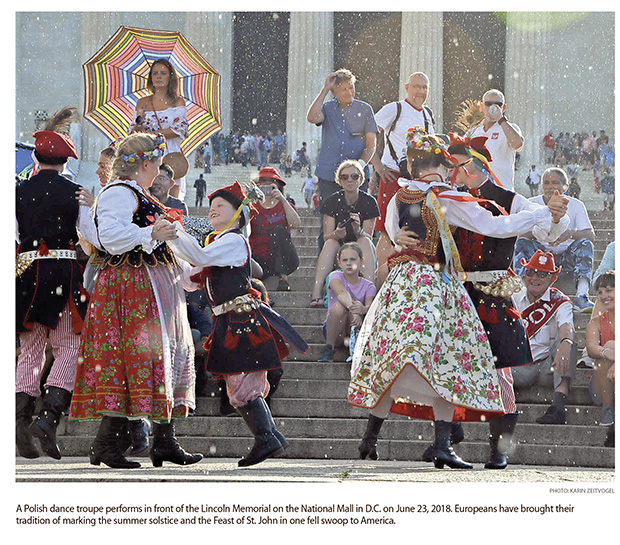 In America, there are a few sure signs that summer has arrived. The smell of barbecuing meat wafts through the air. Beaches are crowded. Inner-city fire hydrants spew never-ending fountains of water. Movies are shown on big screens outdoors. Kids are packed off to their grandparents or summer camp. Dogs cower in basements as fireworks mark the Fourth of July. And people engage in pastimes that are little known outside America, like the corn-hole game, eating contests or even a cherry pit spitting contest.

Because the U.S. is a nation of immigrants, Americans also get to take part in or watch as people who came here from other countries celebrate summer their way. Often, that involves a mixture of pagan and Christian rites to mark the summer solstice and remember the birth of St. John the Baptist several thousand years ago. The two dates — the solstice and the feast of St. John — happen to fall around the same time in late June, but it took a few hundred years after Christendom caught on in Europe to blend the two into one big celebration.

Back in the olde worlde, Europeans usually hold their big summer celebration on June 23, the eve of the feast of St. John and also very close to the northern hemisphere’s summer solstice, the longest day and shortest night of the year. In many parts of Europe, St. John’s Day celebrations involve dancing, drinking, eating and often lighting bonfires and jumping over the still-glimmering embers when the flames have died down. In some towns in France, residents push wishes written on paper into the woodpile (before it’s lit) and watch (after the blaze has started) as their desires rise to the heavens with the smoke from the fire. This is supposed to guarantee that their wishes will come true

Some say the bonfire tradition is a pagan rite that pre-dates Christianity, with the fire symbolizing the light and warmth of the sun. Others say the tradition began in 12th-century France — hundreds of years after King Clovis I, considered the founder of France, was baptized a Christian. Whenever and wherever it started, it caught on, spread and stuck.

Danes celebrate the day, sometimes called Summer Christmas, with bonfires lit at dusk and often topped with an effigy of a witch. In Quebec, St John’s Day is also the national holiday and is marked by parades and fireworks, along with the occasional bonfire. In Florence, Italy, celebrations last for three days, giving everyone reading this an excuse to visit Florence and the town of Fiesole, which overlooks it. In Genoa, bonfires are lit on the beaches and a procession crosses the city, carrying the relics of St. John the Baptist, which were reportedly brought to the coastal Italian city in the 11th century (St. John is the patron saint of Genoa).

In the U.S. territory of Puerto Rico — which Christopher Columbus named San Juan Bautista, whose capital, San Juan, means St. John — water symbolizes baptism and is at the heart of the summer celebration. At the stroke of midnight, as June 23 becomes June 24, tourists and residents of Puerto Rico walk backward into the ocean and “dunk” themselves into it (fall backward) three, seven or 12 times. The water is said to be blessed and dunking is supposed to cleanse partakers of bad things and bestow good luck on them.

Mexicans celebrate in a similar way, according to a 1908 issue of the Sacred Heart Review, published by St. John’s prep school in Danvers, Massachusetts. “Everybody in Mexico takes a bath on St. John’s Day,” the publication says. “In Mexico City, the people flock to the different bath-houses to celebrate the day. High diving, swimming under water and various other aquatic feats are performed by the bathers, amidst the cheers, applause, laughter and criticism of an enthusiastic crowd. A small green pear is the favorite fruit eaten on that day. They are presented in large bunches by the gallants to their favored fair ones, who in turn toss them into the water for the chattering, shivering swimmers to pick up.” 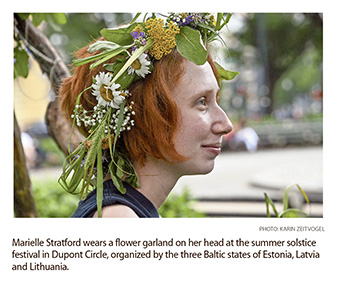 Everywhere the feast of St. John is celebrated, it involves copious amounts of eating and drinking, which might be the precursor to American food-eating contests, the best known of which is probably Nathan’s hotdog eating contest, held on the day of that big American summer festival, the Fourth of July, in New York City’s Coney Island. Repeat competitor Joey Chestnut of California won for the third time in a row this year — his 11th win in the competition — swallowing 74 hotdogs in buns in 10 minutes. Chestnut is ranked number one in the world in competitive eating by Major League Eating, the world body for professional eating contests. Yes, it really exists.

Midsummer in the Swamp

Other countries’ festivals aren’t nearly as excessive as American eating competitions, but, like the American feeding frenzies, often feature specific foods. Latvia, along with its neighbors Estonia and Lithuania, brought a taste of Baltic summer solstice celebrations to D.C.’s Dupont Circle this year. The country produces a fresh curd cheese called Jani siers — John’s cheese — for the summer solstice celebration. Traditionally, the cheese flavored with caraway seeds and other Baltic specialties is washed down with beer, but given U.S. liquor laws and the presence of minors, the beer on tap in Dupont Circle was alcohol-free. Bonfires were also out of the question in Dupont Circle, but in the Baltic states, fires, along with music, dancing and staying up until the wee hours, continue to be a key part of the summer solstice festivities.

Dancers dressed in what looked like very hot traditional outfits performed Baltic dances in Washington’s heat and humidity, and folk singers sang in the square as people ate Jani siers and celebrated summer. This year, the Baltic states also fêted their 100th anniversaries, with all three founded in the aftermath of World War I.

A few miles away from Dupont Circle, on the steps of the Lincoln Memorial, Poles clad in traditional dress and thick tights that looked wholly unsuited to the swamp-like temperatures of Washington, D.C., danced for tourists, residents and other Poles. On the grass off to one side of the memorial, women made wreaths, or wianki in Polish, which, according to Polish legend, are then thrown into a body of water.

“In Poland, they put the wreath into the Vistula River with a wish that they will find a husband,” Polish native Maria Sender told The Washington Diplomat. “St. John’s is the shortest night of the year, and in parts of Poland, girls also go into the woods to find a special flower that only blooms on this night. If you find this flower — kwiat paproci, or flower of the fern — the saying goes you’ll find love, good health and prosperity.”

If you’ve never seen a fern flower, it’s because ferns don’t produce flowers. They reproduce via spores. This may explain why love, good health and prosperity have never been found on a short sortie into the woods.

In addition to the St. John’s Eve customs, Latvians are thought to have given the world the Christmas tree. An end-of-winter ritual in Poland, called Marzanna, is a little less exportable. It involves throwing a doll made of straw — a witch who represents the cold, snowy season — into a body of water, signaling winter’s death and spring’s rebirth. Sometimes, before dousing her in water, the effigy is set on fire. While Poles enjoy the tradition and some have tried to keep it alive in America, it’s one of those activities that could easily be misconstrued.

Sender carried out the Marzanna tradition when she first moved to America. “We lived in a small town in Michigan and I was so thankful that the police weren’t there because if they had seen a woman and two girls throwing something that looks like a body into the water, they might not have understood. We didn’t do that tradition again.” 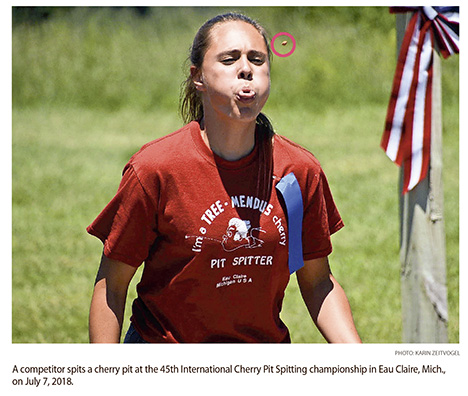 An American Tradition: It’s the Pits

The cherry pit spitting championship at the Tree-Mendus Fruit Farm in Eau Claire, Michigan, has all the trappings of a traditional American festival. There are red, white and blue ribbons, a beauty queen, uncomfortable seating, food, a soprano singing the national anthem and more food. But there’s also the suspense of wondering if Rick “Pellet Gun” Krause will be able to defend his title by once again spitting a cherry pit farther than the next guy or, as was the case this year, girl.

Because that’s a uniquely American characteristic of the Cherry Pit Spit: If a woman can spit as far as a man, she can compete against him. In the eclectic world of cherry pit spitters, men and women are created equal and endowed with the right to spit cherry pits as far as they can.

Krause, 64, successfully defended his title in 2018, expectorating the last of his allotted three cherry pits 41 feet and 8.75 inches, or just under 12.75 meters. His wife, Marlene, won the women’s division with a spit of 29 feet and 10.5 inches — just half an inch farther than 28-year-old Chelsey Torres. Torres’ sister finished second to “Pellet Gun” Krause with a spit of 36 feet and 8.5 inches. Incidentally, Krause’s son, “Young Gun, is the world record holder for pit spitting, at 93 feet and 6.5 inches.

Pit spitting requires good lung capacity and the ability to “seal your tongue around the pit really good so you don’t have any air escape, other than when you want it to,” Krause explained.

What you do with that talent is another question. Do you put it on your CV? Use it as a way to attract a partner? Master of ceremonies Lynne Sage pointed out that both “Pellet Gun” and “Young Gun” have appeared on different TV shows. “David Letterman, the Today Show, Jay Leno have featured them. I suppose I’d put that on my resume,” she said.

The competition is billed as international, although this year, there was only one non-American present, and he was Canadian. In the past, however, contestants from the Philippines (where many people have the opportunity to practice by spitting out betel nuts after chewing them), Germany, Egypt, Israel, Spain and Honduras have taken part in this slice of Americana. The women’s winner, Marlene Krause, is a member of the Navajo tribe.

This year was the 45th cherry pit spit. A gusty wind prevented any new records from being set. Next year, the event will be held on July 6. Winners in all categories get a medal, a food hamper and the right to put on their CV that they can outspit just about anyone.