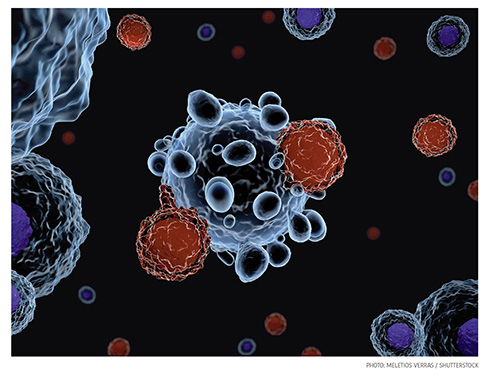 A new method of brewing a cancer vaccine inside a patient’s tumor could harness the power of the immune system to destroy the disease, researchers reported.

Immune stimulants are injected directly into a tumor, which teaches the immune system to recognize and destroy all similar cancer cells throughout the body, said senior researcher Dr. Joshua Brody. He is director of the Lymphoma Immunotherapy Program at the Icahn School of Medicine at Mount Sinai in New York City.

“We’re injecting two immune stimulants right into one single tumor,” Brody said. “We inject one tumor and we see all of the other tumors just melt away.”

Eight out of 11 lymphoma patients in a small, early clinical trial experienced partial or complete destruction of the tumor that received the initial injection, according to the report published April 8 in the journal Nature Medicine.

The results were solid enough that the research team is expanding its next clinical trial to include lymphoma, breast and head and neck cancer patients, Brody said. That trial started in March.

Prior efforts at unleashing the immune system to fight cancer have focused on T-cells, which Brody calls the “soldiers” of the immune army because they directly attack harmful invaders in the body.

“We call them the ‘Jimmy Carter’ medicines because that’s what Jimmy got when he had very advanced-stage melanoma,” Brody said.

But the checkpoint inhibitors have typically only been able to help about one in five cancer patients significantly, “so there’s lots of room for improvement,” he added.

This new vaccine approach focuses on dendritic cells, which Brody calls the “generals” of the immune system’s army. Dendritic cells guide the response of T-cells to fight off invaders.

“We’re trying to mobilize these immune generals to tell the soldiers what to do,” Brody said.

Patients first received nine daily injections of an immune stimulant intended to “recruit” dendritic cells by teaching them how to recognize cancerous cells, the study authors explained. The patients then received eight injections of a second stimulant that “activates” the dendritic cells, prompting them to instruct T-cells to hunt and destroy the now revealed cancer cells in the body.

Essentially, the method turns the injected tumor into a cancer vaccine factory, the researchers explained.

The approach differs from traditional vaccines for the flu or measles because those are preventive, teaching the body beforehand how to fight off an infectious disease, Brody pointed out.

This vaccine is therapeutic. “We’re trying to teach the immune system to get rid of the thing even after you’ve already got the problem,” he said.

Because of this, patients in the new trial will receive both the vaccine and checkpoint inhibitors, the researchers said.

However, she noted that really only three of the 11 patients in the initial clinical trial had truly meaningful responses to the vaccine.

“These are indolent lymphoma patients,” said Diefenbach, an expert for the American Society of Clinical Oncology. “The fact there was stable disease doesn’t really mean anything because these cancers don’t grow fast.”

The American Cancer Society has more about cancer immunotherapy at www.cancer.org/treatment/treatments-and-side-effects/treatment-types/immunotherapy/what-is-immunotherapy.html.