Work by Santiago Morilla is featured in “Spanish Illustrators: The Color of Optimism.”

When considering Spanish art, names like Pablo Picasso and Salvador Dalí and movements like modernism and surrealism often come to mind. Illustration does not.

But a new legion of Spanish artists is bringing illustration to the forefront of cutting-edge creativity, thanks in part to the spread of the internet and social media.

This spring, delve deeper into the underappreciated world of illustrating at the former residence of Spanish ambassador — now the country’s cultural center in D.C. — with “Spanish Illustrators: The Color of Optimism.”

The exhibit, curated by journalist Mario Suárez, features a generation of artists such as Ricardo Cavolo, Paula Bonet and Carla Fuentes, among others, whose work has appeared in publications, galleries, museums and other genres worldwide. 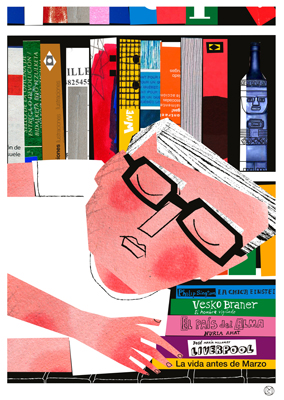 At a press breakfast marking the opening of the exhibit, Suárez, a former lifestyle director for Rolling Stone magazine, said that illustration “is a part of art history.”

“For many years, illustration was considered a low category of art, but this is not so,” he said, noting that while icons such as Picasso, Dalí and Francisco Goya have left an indelible mark on art history, today’s illustrators “are the inheritors of the new contemporary art in Spain.”

Suárez went on to talk about how in the early 2000s, a group of groundbreaking illustrators emerged onto the scene and began a major international expansion. He cited the examples of Javier Mariscal and his Cubist-inspired sheepdog “Cobi” that served as the official mascot of the 1992 Barcelona Olympics, as well as Jordi Labanda and his stylish illustrations for the New York Times Sunday Magazine.

The artists in the exhibit, like Ricardo Cavolo, have also made their mark on Spain and around the world. Cavolo’s career skyrocketed when Cirque du Soleil chose him to create a poster for one of its shows. Cavolo’s work has since appeared in Rolling Stone and he has has collaborated with worldwide brands including Nike, Converse, Urban Outfitters and Dockers. 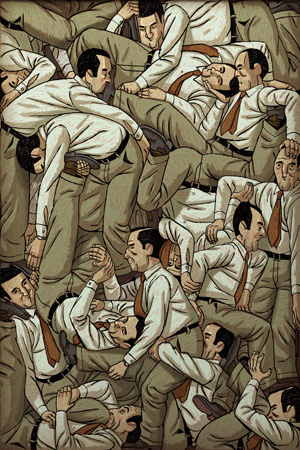 While Cavolo was in town for the exhibit launch, he painted a mural at the Embassy of Spain that allowed Washingtonians to watch him live in action.

Fellow exhibition artist Paula Bonet is the youngest in the show, at only 28 years old. She will also be on hand to paint a mural at the Spanish Embassy in May. Inspired by British painter David Hockney, Bonet’s work has been published in Japan, Australia and Mexico.

Bonet’s voyeuristic illustration of a topless woman graces the cover of the 2016 Spanish Cultural Program catalogue. The attractive young woman stares directly at the viewer as an iceberg emerges from her bare, bluish torso.

Other illustrations are similarly eye-catching and enigmatic. A jumbled maze of men in drab, indistinguishable business suits fit together like a jigsaw puzzle in Paco Roca’s illustration. A nude man and woman find themselves entangled together by a huge mop of spaghetti-like hair in Santiago Morilla’s provocative “Quinina” series. Meanwhile, splotches of bright, paint-like colors mimic a rainbow of tears as they drip down from the eyes of a woman drawn in simple black-and-white lines in Conrad Roset’s “Musa.”

Suárez says the exhibit, which has already traveled to Rome, Frankfurt and Berlin, highlights Spanish illustrators’ “creativity, color and primarily their optimism that each and every one of us needs every day.”

Spanish Illustrators: The Color of Optimism

former residence of the ambassador of Spain