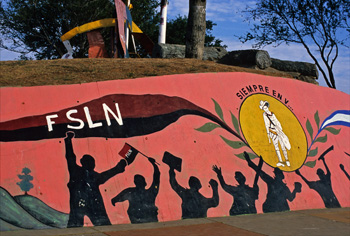 Nicaraguans will go to the polls Nov. 6 to elect a president, but there’s no mystery concerning the outcome. Daniel Ortega, the aging revolutionary who led his leftist comrades to a military victory in 1979 and has been a key figure in this Central American nation ever since, will in all likelihood trounce his two adversaries — despite past allegations of voter manipulation and outright fraud by Ortega’s ruling Sandinista Party.

Propaganda for the ruling Sandinista Party can be seen throughout Managua, Nicaragua. Longtime Sandinista leader Daniel Ortega — bolstered by record factory exports, the sale of Venezuelan oil to other countries and a steadily growing tourism industry — is widely predicted to win the country’s Nov. 6 presidential elections.

The reason: Nicaragua’s economy is doing quite well, buoyed by record factory exports, the sale of Venezuelan oil to other countries and a steadily growing tourism industry. It also helps that Ortega enjoys widespread popularity in a still-impoverished country where personalities usually matter far more than issues.

Ortega’s hand-picked man in Washington, Ambassador Francisco Campbell, wouldn’t discuss the upcoming elections with us, though a variety of Nicaragua experts agree that something doesn’t smell quite right in that New York-size country prone to earthquakes, dictatorships, revolutions and widespread corruption.

“At least 55 percent of the population says Ortega has been doing a good job, so the allegations that he’s corrupt — even though they’re right — are not an issue for the majority of Nicaraguans,” says Manuel Orozco, a senior analyst at the Washington-based Inter-American Dialogue.

For one thing, Orozco told The Diplomat, the president has succeeded in keeping the opposition weak and divided. Secondly, he enjoys strong support from two of Nicaragua’s most important institutions: the private sector and the church. And thirdly, “he’s been able to adopt a populist stand, basically using government resources to provide favors for the people.”

Orozco, a Nicaraguan who was approached by a close ally of Ortega after the president’s 2007 election victory and asked to advise the government on economic policy (he politely refused), said that the president, running for a third term, has basically won the support of businessmen through handouts and old-fashioned cronyism. That stands in stark contrast to other Latin leftists and socialists like Venezuela’s Hugo Chávez and Bolivia’s Evo Morales who have largely alienated the business community.

“He learned right after his defeat in 1990 that in order to win an election, you have to gain the favor of the private sector,” Orozco said of Ortega. “So for the past 15 years, he’s been respecting private property and doesn’t charge high taxes on the private sector. He was able to keep the country relatively stable during the recession, mainly by utilizing revenues from the sale of Venezuelan oil to pay for welfare services.”

Orozco estimates that Nicaragua — thanks to Ortega’s solidarity with fellow populist Chávez — receives $500 million a year worth of Venezuelan oil at subsidized prices.

According to the latest CID Gallup poll, Ortega is by far the leading candidate, with a 45.5 percent margin of support among likely Nicaraguan voters. In second place is Fabio Gadea Mantilla of the Independent Liberal Party, with 33.5 percent. Trailing Gadea in the polls with 10.1 percent is the Liberal Constitutional Party candidate Arnoldo Alemán Lacayo, a former president of Nicaragua who was convicted of embezzlement in 2003.

Thanks to a deal hatched in 1999 between then-President Alemán and Ortega, whose FSLN party was in the opposition, a presidential candidate needs only 35 percent of the vote to avoid a runoff election, a threshold polls indicate Ortega will surpass.

“Politics in many Central American countries, especially Nicaragua, is based on personal appeal, and Ortega has that. He’s also an experienced politician, and he knows how to move money and satisfy constituencies,” said Stephen Johnson, director of the Americas Program at Washington’s Center for Strategic and International Studies (CSIS). “The problem with the opposition is coming up with a candidate who knows how to appeal to the people and spread patronage around.”

Johnson said Ortega has avoided the radical anti-American agenda that marked his years as a Sandinista comandante. In fact, the comandante has embraced America’s capitalists and gone out of his way to take full advantage of Nicaragua’s free trade agreement with the United States under DR-CAFTA.

“By not upsetting the apple cart with a wholesale return to the days of sandinismo, he’s managed to maintain good graces with a broad base of the population,” said Johnson, who traveled to Nicaragua frequently during the 1980s as a military attaché with the U.S. Embassy in Honduras, and in 2001 as an election observer.

What irks Ortega’s opponents is the way in which he circumvented Nicaragua’s own election laws to be able to run again, even though the constitution specifically forbids the re-election of an acting president following a five-year term and bans the candidacy of any president who has already served two terms.

Tim Rogers is editor of the Nicaragua Dispatch, an online news service covering politics and business. He says Ortega and his cronies in the judicial system blatantly sidestepped the constitution in 2009 to allow him to stand for re-election.

“The Sandinista judge decided that [Article 147 of the constitution], which says there are no consecutive re-elections, does not apply to Ortega. They said it violates other articles which state that everyone is created equally, so if the president can’t run again, he’s not being treated equally,” Rogers told The Diplomat from Managua. 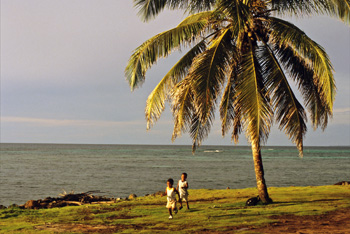 Little boys run along a deserted beach on Corn Island, a growing Nicaraguan tourist destination. Just over 1 million foreign tourists visited Nicaragua in 2010, the first time that country has exceeded the million mark.

In addition to relying on Sandinista judges to declare his candidacy legal, his supporters even took advantage a public holiday declared by Ortega himself to quietly reprint a newer “version” of the constitution with an arcane law from 20 years ago reinserted into it while opposition lawmakers were away.

“This could mark a real turning point in Nicaragua’s fragile democracy, in that here’s essentially a candidate whom the opposition calls illegal, running in an electoral system controlled by his party,” Rogers said. “That electoral council has already been accused of various kinds of electoral fraud. It’s a very precarious situation.”

Ortega’s running mate is retired Gen. Omar Halleslevens, one of the founders of the Sandinista army, who until last year commanded the country’s armed forces.

“Halleslevens is highly regarded and gives that ticket a great deal of respectability which Ortega lacks, particularly on constitutional grounds,” said Rogers, though he warns that the general’s inclusion on the ticket is also seen as a thinly veiled attempt by Ortega to curry favor with Nicaragua’s military.

“The country has become very polarized, and the Sandinistas are constantly keeping tabs on their neighbors, on who’s supporting whom,” he charged. “Whether or not you’re a Sandinista determines whether or not you receive government aid.”

Yet with all the focus on Libya, Syria, Afghanistan and Iran, Foggy Bottom has been strangely silent on the dubious dealings in Nicaragua, notes CSIS’s Johnson.

“You don’t hear anyone in the State Department complaining very loudly about how he manipulated the constitution to run again, so it’s likely our government will live with it, although an Ortega victory will certainly leave an unsavory aftertaste,” he said.

One reason might be that the Washington political establishment — while not exactly in love with Ortega — prefers to look the other way as long as the old rebel stays out of trouble and keeps the door open to U.S. investors.

There’s no question that since Ortega’s return to power in 2007, Nicaraguan exports have doubled and foreign direct investment has grown nearly five-fold.

“Nicaragua now has the fastest-growing economy in Central America. Ironically, it’s become the poster child for the IMF,” noted Rogers. “Every year Ortega’s been in power, Nicaragua has set new records for exports and FDI. The macroeconomic numbers are encouraging, and at the end of the day, that’s what people care about.”

The numbers evidently speak for themselves. In the first half of 2011, Nicaragua attracted $284 million in FDI. While that rate of investment may cause the country to fall short of the $1 billion goal Ortega set at the beginning of the year, it still represents a 32 percent increase from the year-ago period, according to Veronica Rojas, vice minister of the country’s Ministry of Industry, Commerce and Development.

Nicaragua is also the only country in Central America to not only recover the free trade zone jobs it lost during the 2008-09 global economic slump, but to surpass previous employment highs in that sector.

Retired Gen. Álvaro Baltodano, presidential delegate to the investment agency PRONicaragua, said that by the end of this year, 97,000 Nicaraguans will be employed in the country’s free trade zones — producing everything from women’s underwear to blue jeans for the nearby U.S. market.

“The increase is due to the fact that Nicaragua is perceived as an interesting destination on the international level,” said Salinas, noting that his country expects $100 million worth of investment in tourism projects over the next year.

He said 60 percent of the tourists who visit Nicaragua come from other Central American countries, mainly Honduras, followed by the United States, Canada and Europe. The average stay in the country is 7.3 days and each tourist spends an average of $50 per day. Authorities registered gross income of $360 million from foreign tourism in 2010, up from $346 million in 2009.

Anticipating even more tourism, the Ortega government plans to build an international airport at Lake Nicaragua’s Ometepe, the world’s largest volcanic island in a freshwater lake. The $7 million facility will boast a 1,500-meter runway and serve aircraft carrying up to 42 passengers, said Orlando Castillo, manager of the country’s state-run airport authority, noting that the new airport will be built on the site of a long-gone tobacco factory.

“The decision to build an airport in Ometepe was taken due to the island’s great potential for tourism development,” said Castillo, adding that the government also plans to open two more international airports in Greytown and Punta Huete.

In addition, a $1.5 million project is under way to restore the historical center of Granada, a charming colonial city and Nicaragua’s leading tourist attraction, with funds from the Spanish Agency for International Development Cooperation, the European Union and the Inter-American Development Bank.

Private money is pouring into tourism projects too. One of the country’s largest planned ventures is Guacalito de la Isla, a massive resort that stretches 670 hectares along the Pacific beaches of Guacalito and Manzanillo.

Such luxury resorts cater to the ever-growing numbers of Americans who’ve decided to retire in Nicaragua, lured by the country’s natural beauty and relatively low cost of living. They also boost Ortega’s standing in the foreign investment community, which values stability and the rule of law.

If past is prologue, Johnson observed, Ortega may be populist enough to satisfy his Sandinista support base, but pragmatic enough not to irritate close neighbors.

“He might offer refuge to old fellow travelers like Muammar Qaddafi, but probably won’t block commerce with the United States. It’s not a strategy that will help Nicaragua progress in any sense of the term, but that was never the point,” Johnson said. “It’s about running a political machine, nothing more. And until the majority of voters get sick of the corruption, that’s all it will ever be about.”