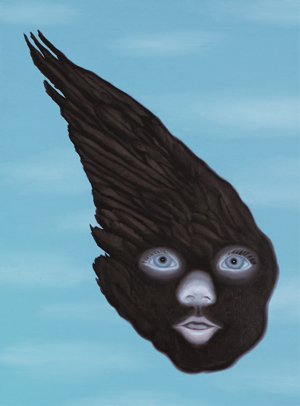 Photos: Collection of the National Museum of Women in the Arts

The National Museum of Women in the Arts is showcasing the fantastical images of Audrey Niffenegger.

There are probably few museum exhibitions occupying one floor that appear at first glance to be so dramatically different from each other than “American People, Black Light: Faith Ringgold’s Paintings of the 1960s” and “Awake in the Dream World: The Art of Audrey Niffenegger,” both at the National Museum of Women in the Arts (NMWA).

Ringgold’s paintings are boldly political, an unapologetic mirror on America’s racially divided history that echoes particularly loudly this year — the 50th anniversary of the 1963 March on Washington, the murder of four young African American girls in a church bombing in Birmingham, Ala., and the political assassinations of John F. Kennedy and Medgar Evers.

In contrast, the Niffenegger exhibit inhabits a more fantastical, lyrical world, one that ponders universal themes — death and decay, love, jealousy, redemption and the inevitability of change — but from a surreal, internal place of the intellect, imagination and heart.

Ringgold is more renowned as the originator of the African American story quilt revival in the 1970s, although she was also a prolific African American artist and activist in the 1960s. Niffenegger, on the other hand, is best known as a critically acclaimed novelist (“The Time Traveler’s Wife” and “Her Fearful Symmetry”) who has also written visual novels such as “Raven Girl.”

Both of these women’s radically different gifts are on full display. Ringgold’s paintings are stark and vivid, shaped by modernist influences reminiscent of Pablo Picasso and Jean Dubuffet as well as traditional African motifs, while Niffenegger’s dark and fey influences spring from adult fairytale books and illustrators such as Aubrey Beardsley and Edward Gorey. 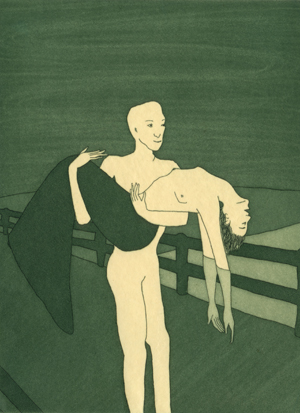 By hanging in physical proximity, they represent a dilemma for the viewer, who might be tempted to compare and contrast the works, to find an elusive connection between them. But I would just advise forgoing the forced analysis, stepping back and bathing in the distinct qualities that bind the two exhibitions, which are wholly original, much like their creators. Admire these artists for their singular approach, and the NMWA for bringing these two talents together in one space.

Their artistic strengths shine in different lights. Ringgold’s paintings seem to be physically alive, swelling, bursting with emotions that take a no-holds-barred approach to the civil rights movement, while Niffenegger seems to draw us inward, into a wispy landscape where dreams, fantasies and fears reside, buffeted by breezes thickly full of time.

Both Ringgold and Niffenegger are remarkable storytellers, but Ringgold’s narrative is particularly compelling, in part because it speaks to the harsh reality of its time.

It’s a narrative that was often overlooked. Ringgold said art galleries showed little interest in her racially charged paintings in the 1960s, and they have not received as much critical attention as her story quilts have.

Fortunately, the National Museum of Women in the Arts didn’t shy away from Ringgold’s provocative paintings — including “Die,” a bloodstained jumble of terrified women and men (and children), black and white, that she described as her response to the race riots of the 1960s. 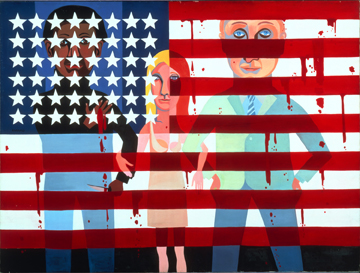 Faith Ringgold’s “The Flag is Bleeding”

You can see how some of these pieces might make curators and cultural mucky mucks uncomfortable, even today. In “The Flag Is Bleeding,” a white woman and man lock arms with a black man as they all stare out from the stars and stripes, which are dripping in blood. The painting is part of the series “American People,” which Ringgold said shows the “condition of black and white America and the paradoxes of integration felt by many black Americans.” Another series, “Black Light,” examines notions of black beauty and the wide spectrum of skin color among African Americans.

Ringgold, now 83, isn’t afraid to challenge her viewer’s comfort level. She tackles issues of power, race, hierarchy, class and feminism head on. Her paintings are defiantly blunt, painful and dramatic, exposing deep wounds that in some ways are shared but in other ways were inflicted by fellow Americans. Even today, race is a subject that only occasionally dares to rear its head, then just as quickly retreats from the discussion.

It is a history Ringgold not only lived through, but also played an active role in. For instance, she organized and participated in demonstrations against the Whitney Museum of American Art and the Museum of Modern Art, demanding a greater voice for black artists, black women in particular.

Those struggles, which took place not that long ago yet sometimes seem a distant memory, resonate this year as Americans remember the tragedies and triumphs of the civil rights movement.

Niffenegger’s stories seem less dramatic, but are nonetheless disturbing and echo struggles we all must grapple with, as seen in a series of self-portraits in which the artists confronts coming of age, death and physical forms changing. 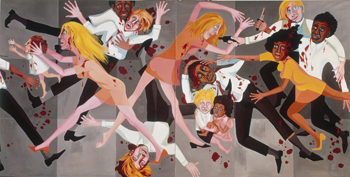 A separate exhibition of 1960s paintings by Faith Ringgold include the provocative pieces such as “Die.”

“Niffenegger’s captivating narratives, presented in both images and words, give insight into universal experiences such as the need and fleeting nature of love, the inevitability of death and the peculiar sensation of the passage of time,” said exhibition curator Krystyna Wasserman, a pioneer in books-as-art exhibitions.

In one portrait, the dramatically red-haired Niffenegger sprouts butterflies instead of ears. Hair spills lusciously across the canvas in “The Three Incestuous Sisters.” In “Poisonous Plants at Table and Prudence: The Cautionary Tale of a Picky Eater,” skeletal beings participate in a Victorian English garden party that seems both whimsical and frightening. In contrast, “Death Comforts the Mother” is a hauntingly solemn, pensive work that features the silhouette of a solitary pregnant woman.

Niffenegger’s works on paper, lithographs and aquatints reflect the surreal nature of her books, but to say her work is bookish would be redundant and misleading. She is like a woman who lived in a book, steeped in literary musings, raised by ravens and roving tale tellers — an Alice years after Wonderland. But her imagination tears off the page.

Both Niffenegger and Ringgold entrance their audiences with their storytelling magic, although the spell each weaves is distinct in its power to captivate, shock and mesmerize.

Awake in the Dream World: The Art of Audrey Niffenegger