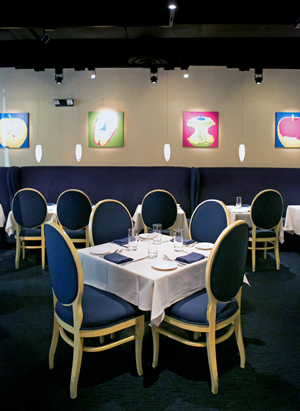 Newton’s Table, which took over the space once occupied by Rock Creek restaurant, specializes in clean, fresh American dishes with a hint of Asia.

In 2011, diners in Bethesda, Md., welcomed the opening of Newton’s Table, the first solo venture of one of its hometown boys, chef Dennis Friedman. A Montgomery County native, Friedman’s beginnings in the industry were humble, waiting tables at Ledo Pizza in Bethesda. That didn’t last long. Getting the cooking bug, he embraced a culinary career rather than the law career he’d originally intended to have.

After finishing his training at the Culinary Institute of America in Hyde Park, N.Y., Friedman worked with renowned chef Daniel Boulud at Boulud’s eponymous restaurant in New York City. He soon returned home, however, to cook in Washington at Kinkead’s and Citronelle, under Michel Richard. Friedman got his chance to take on a leadership role when he became chef and co-owner of Bezu Restaurant in Potomac, Md., and he hasn’t looked back since.

When the owners of Rock Creek restaurant in Bethesda decided to shut down, Friedman saw the opportunity to go solo and took over the space. After closing for a brief period for renovations, he reopened as Newton’s Table, an American restaurant with a hint of Asia. The renovations were mostly cosmetic and the result is a pleasingly understated look with a few distinctive features enlivening the space. There’s a glass wall fountain that tempts the inner child to get wet, while earth-colored glass-tile columns give the effect of cascading waterfalls.

In a nod to the restaurant’s name (the childhood nickname Friedman’s father gave him), one wall is dominated by a brightly colored series of Warholesque apples in various states of consumption. The visual homage even makes its way into the restrooms, where a lovely painting of apple blossoms graces the ladies’ loo. (The gents get a whimsical kitchen scene.)

Friedman brought over some of his signature dishes from Bezu, playing on similar themes he developed at that restaurant. The menu also feels as though the ghost of Rock Creek may be looking over Friedman’s shoulder as he constructs his dishes — which are clean, simple and light. On a recent night, for example, the ahi tuna, (tuna is one of Freidman’s specialties) was encrusted in nigella seed and served with lightly poached baby bok choy, garlic-scallion fried rice and a lemon-soy beurre blanc. The rockfish was lightly pan seared and served with a summer vegetable succotash and tomato saffron butter. 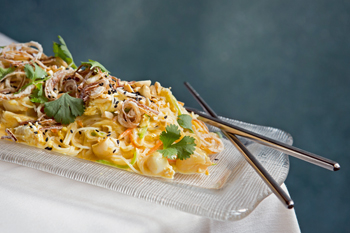 Friedman is highly regarded for his handling of fish, which at Newton’s has been generally well prepared, although on a recent visit we all agreed that the black bass was a stellar standout. The perfectly pan-seared filets were served over a Cuban-style black bean compote, corn mascarpone and pickled summer vegetable dressed in a parsley vinaigrette.

Not everything, however, trends to the healthy at Newton’s Table. The mushroom ravioli, another Friedman specialty, is unabashedly rich, with its combination of shitake, porcini, cremini and oyster mushrooms, mozzarella and Boursin cheeses, thyme, shallots, roasted mushroom sauce, sliced truffles and white truffle oil.

On the meat side, Newton’s offers several different steaks, including a huge piece of bison, that are prepared with a variety of sides. But for a melt-in-your-mouth beef option, the braised short ribs from the small plates are unbeatable. A single braised Meyer beef short rib, served with a smooth parsnip puree and house barbeque, is a perfect meal for the moderate appetite and will leave room for the interesting desserts that Newton’s offers. 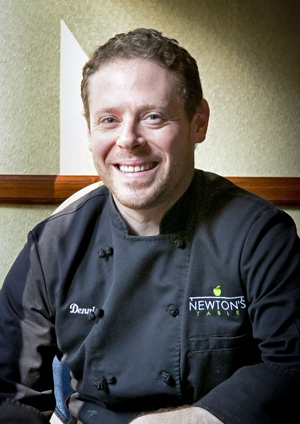 Freidman recently took the winning title in the Mason Dixon Master Chef Tournament. Maybe that explains the slightly southern tones that appear on the menu, most strikingly in the Pig Brittle dessert, which was named by the Food Network as one of the 50 best ice cream dishes in America. It’s a simple dish: a bowl of homemade vanilla ice cream served with several thick slices of brittle. What is not simple is the brittle, which starts out sweet in the mouth, shifts to salty mid-bite, and finishes with flakes of bacon as the sugar melts. It’s ingenious.

For those wanting something more traditional (OK, let’s face it, chocolaty), the chocolate crunch is excellent. The four small Kit Kat-like sticks of milk chocolate, macadamia nut crunch and wafer are dense and easy to share. In another nod to Isaac Newton, Friedman developed an apple trio that includes a tiny apple tart, apple crème brulee and granny apple sorbet. It’s a light alternative that feels particularly right this time of year as apples come into their own.

Newton’s has another project in the works: Newton’s Noodles, a fast-casual franchise that opened in Midtown D.C. in September. Friedman hopes to capitalize on the noodle craze by offering up “fuzu” noodles, made-to-order curry- or soy-flavored noodles with protein, veggies and spices (fuzu is the term Freidman has coined for his pan-Asian concoctions). He’s been piloting some of the fuzu dishes at Newton’s Table, which recently featured a coconut-curry rice noodle version with snow peas, carrots, onions, bean sprouts, eggs, chicken, shrimp, scallops, coconut milk, curry, lime, lemongrass, ginger and cilantro. It was a delicious dish, but rather pricey at $27 for something that resembles classic pad Thai.

With his expansion into D.C., Friedman has brought on Peter Smith, owner of the late and lamented PS7’s, to handle the day-to-day work at Newton’s Table. The two worked together at Vidalia in the past and share a mutual respect. It will be interesting to see what new additions appear on the already-eclectic menu under Smith’s influence.

Reservations: Accepted via online and telephone