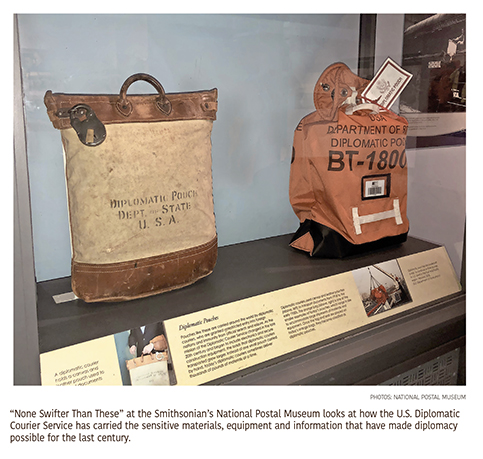 Email might dominate our day, but mail — the old-fashioned kind — has always been, and will continue to be, an integral part of our lives, whether it’s in the form of a letter from a loved one fighting on the front in World War II or an Amazon package with the latest tech gadget at your doorstep for the holidays.

Diplomacy is no different, except that it relies on an exclusive cadre of couriers to transport and safeguard some of America’s most important secrets — a service that has endured for over a century through wartime, peacetime and even the advent of the inbox.

“None Swifter Than These: 100 Years of Diplomatic Couriers” at the Smithsonian’s National Postal Museum, developed by the State Department’s Diplomatic Security Service, looks at how the U.S. Diplomatic Courier Service carries the sensitive materials, equipment and information that make diplomacy possible.

The title of the exhibit is derived from the Greek historian Herodotus, who coined the phrase “none swifter than these” to pay homage to ancient Persian messengers who were known for their speed and reliability.

The U.S. Diplomatic Courier Service has its own storied and unique history, dating back to December 1918, when the U.S. Army courier detachment (dubbed the “Silver Greyhounds”) was established at the U.S. Embassy in Paris to support the American Commission to Negotiate Peace at the end of World War I. This handpicked group of Army messengers traveled by car, motorcycle, biplanes, trains, ships, horses, bicycles and on foot to carry diplomatic pouches across war-torn Europe and into Bolshevik Russia.

Despite the vital role these couriers play, many Americans are unaware of their existence. The exhibit at the National Postal Museum (another hidden gem that many locals are unaware of, even though it boasts one of the largest stamp collections in the world) sheds light on this critical — and at times dangerous — profession.

The exhibit was inspired by papers and artifacts belonging to Maj. Amos J. Peaslee, who was originally tasked with dispatching the Silver Greyhounds across Europe during World War I.

“In April 2018, the family of Major Peaslee donated his papers and artifacts to the U.S. Department of State. Many of the pieces in the Peaslee collection originated in Paris a century ago and traveled across Europe,” according to the State Department.

The display showcases Peaslee’s personal, engraved copy of the Treaty of Versailles, as well as historic photos and travel documents from throughout his career (including items from his time in Russia during the Russian Revolution).

Russia played an important role in expanding the Diplomatic Courier Service, as mistrust between Western and communist nations rose during the Cold War, prompting the need for more covert communications. In fact, diplomatic couriers were among the few Americans who regularly ventured behind the Iron Curtain.

“During the final decade of the Cold War, the courier workload began shifting from documents to cargo shipments as a result of discoveries of listening devices at the U.S. Embassy in Moscow,” according to the State Department. This meant that even materials as large as concrete pillars were sometimes sent via classified diplomatic pouches to ensure that construction materials were secure. “The listening devices on display at the museum illustrate Soviet techniques to embed surveillance equipment into the very fabric of diplomatic buildings during the Cold War,” according to the department.

This includes one of at least 16 “bugged” IBM Selectric typewriters discovered in the U.S. Embassy in the Soviet Union in the early 1980s, as well as a carved Great Seal of the United States presented by Soviet officials to the U.S. ambassador in Moscow in 1948. It hung in the ambassador’s residential study until 1952, when a security sweep revealed a cavity resonator microphone embedded in the center of the seal.

In another fascinating historical tidbit, comedian Harpo Marx was tapped to become a secret diplomatic courier in 1933 during a six-week goodwill tour of the Soviet Union, where he ferreted confidential messages taped tightly to his leg back to the U.S. 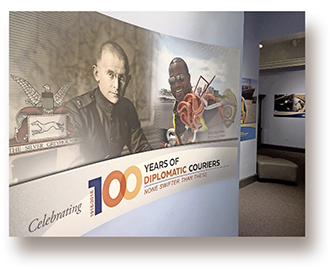 Six diplomatic couriers have died in plane crashes over the past century. The first courier, James N. Wright, died in 1943 aboard an aircraft that crashed in Portugal — his diplomatic briefcase reportedly still handcuffed to his wrist. More recently, in 2008, Andy Perez was on a plane that crashed at the end of a runway in Brussels with 4,000 kilograms of regional classified material bound for Manama on board.

But these diplomatic deliveries also save lives, particularly in today’s age of global terrorism, wrote James B. Angell, a veteran courier, in the November 2018 issue of The Foreign Service Journal.

“After the Paris attacks on Nov. 13, 2015, a Diplomatic Courier Service team worked late into the evening and over the weekend to transport critical shipments to France…. Just a week later, terrorists attacked a hotel in Bamako, Mali, killing 20 people. Once again, diplomatic couriers went into action, formulating and executing a plan to support shipments to a remote U.S. mission that is difficult to service even during normal times,” wrote Angell, who himself was once on a tarmac in Kenya just 36 hours after being dispatched to support protective teams at the U.S. Embassy in Juba during civil unrest in South Sudan.

“Such an urgent mission is indicative of the swift global response the Diplomatic Courier Service is capable of making and showcases how essential our role is in protecting the department’s personnel,” he wrote. He added that couriers also help advance the nation’s strategic objectives, providing logistical support for milestones such as the reopening of the U.S. Embassy in Havana.

Today, diplomatic couriers spend tens of thousands of hours annually delivering millions of pounds of classified diplomatic cargo material by air, sea and land to more than 275 diplomatic missions around the world.

For all the globe-trekking, however, the job isn’t exactly glamorous.

“In a far cry from the first-class seats of decades gone by, today’s diplomatic couriers frequently fly in jump seats on cargo planes with ‘pouches’ that can fill the entire cargo hold. Increasingly, though, you’ll find couriers on cargo ships, ferries, trains and trucks — whatever is most efficient,” wrote Angela French, a State Department public affairs officer, in the November 2018 Foreign Service Journal article.

Couriers begin their journey at the “vault,” a secure storage facility for classified materials, and then follow a meticulous checklist of procedures that includes being escorted to and from planes. Throughout the process, diplomatic couriers must also double as logistics experts.

“Getting the shipments to their destination is a feat requiring an expert level of familiarity with weight restrictions and flight schedules for commercial and cargo airlines, as well as an encyclopedic understanding of entry requirements — from vaccinations to visas — for every country,” French wrote.

It’s a carefully choreographed dance that Angell, who joined the State Department in 1933, mastered over his decades of service, which included Secretary of State John Kerry’s tenure that logged a record-breaking 1.3 million miles of travel.

Angell recalled that “our team always delivered his secure communications gear to post three days prior to each visit. This perfect record included [Kerry’s] final trip to Davos, in January 2017, for which a diplomatic courier had to purchase 400 euros worth of tire chains at the base of the Alps to ensure the equipment reached the icy resort on schedule.”

Despite the demanding, unpredictable nature of the job, Angell said the rewards are well worth it.

“After spending a quarter-century in the Diplomatic Courier Service, I still believe it is not only one of the best jobs in the U.S. government, but perhaps in the entire world. Even a flight I recently took from Birmingham back to Frankfurt while squashed into the jump seat of a small cargo plane, to escort Secretary [Mike] Pompeo’s classified communications equipment, reminded me what an adventure this job continues to be,” he wrote. “What other line of work offers this gift of global travel and living abroad while serving one’s country?”

None Swifter Than These: 100 Years of Diplomatic Couriers