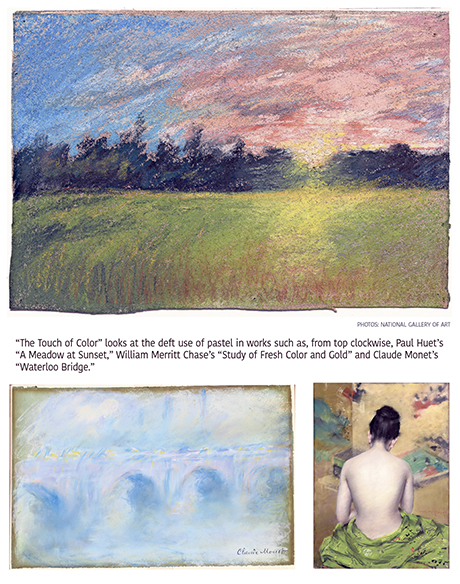 A new exhibition at the National Gallery of Art gives an underappreciated medium the deep survey it deserves.

“The Touch of Color: Pastels at the National Gallery of Art” offers a broad, but intimate, look at the material’s use since the Renaissance to the present day. Pliable, practical and eye-popping, pastel can deliver color, texture and line. It also makes works that are extremely delicate, soft yet powerful — and this show features several pieces that have not been shown in decades, according to curator Stacey Sell.

“They often are too fragile to go out on loans, so the fact that we have a broad enough collection that we can show the whole history of pastel, we’re really lucky,” she told The Washington Diplomat. “Every major period is represented in this exhibition. And you can see how differently artists chose to use it.

“Artists have considered them paintings at some times in history, and drawings at some times,” Sell added. “We tend to think of a pastel as a drawing, but during the 18th century, finished pastels were considered paintings and they’re almost always done on paper, which is then glued to a canvas, just like an oil painting. Pastel is so velvety and soft — you always want to touch it.”

While that is definitely not advised, one recommendation Sell does have is to start your tour in the middle of the show. The exhibition is best appreciated by understanding pastels — which are formed using powdered pigment and a binding medium — and the middle room features a helpful glass case that goes into details about the material, what it can do and how artists like to use it.

Then, returning to the first room of the small but packed three-room exhibition, visitors can venture chronologically through the medium, traversing from the pastel preparatory sketches of the 1500s to the stunning portraits of the 18th century. It’s fascinating to trace how pastel thrives on the continent, and then gets another new life after it comes to England through travelers returning from the Grand Tour.

“The 18th century, especially in France, was sort of the high point of technical brilliance — all different textures, fabrics,” Sell said. “You get so drawn in. You have to figure out what exactly makes that look like satin.”

The room also highlights how women artists were able to make an impact with the medium, becoming renowned pastelists like Venice’s Rosalba Carriera, whose fame helped promote pastel portraits all over Europe. Pastel was considered appropriate for women because “it was thought of as cleaner than oil paint” and “was easy to master,” Sell said, adding that pastel studios also could be run on a small scale without the help of assistants.

The middle room delves into the 19th century, careening from Jean-François Millet’s revolutionary focus on hatching (a technique used to create tonal or shading effects), exposed paper and depictions of the working class, to Claude Monet’s exquisite “Waterloo Bridge,” a whisper of fog and light.

“[Pastel] went out of style at the end of the 18th, early 19th century, but one of the groups of artists who kept using it through that period were the artists working outdoors, the landscape artists. And when you think about that, it’s the perfect medium because you’re applying color and line all at one time,” Sell noted. “And in some ways it was kind of the perfect medium for the Impressionists. It’s the exact opposite of the highly finished, academic oil paintings that they were rebelling against. It really draws your attention to the process of making art.”

In Millet’s pastels — which were rarely exhibited during his lifetime and which he dubbed dessins rehaussés, or enhanced drawings — line becomes the most dominant part of the medium in these seemingly simple drawings that captured the attention of Impressionists. They also suggest a significant shift from the concept of pastel as paintings that is so clear in the previous room. Along with the Monets on offer, the show also features several pieces by Edgar Degas, with fascinating technical aspects that allow you to see how he applied pastel in different ways and worked with watercolor and other materials in the same images.

Amid the blockbuster names, don’t pass over Paul Huet’s small but brilliant “A Meadow at Sunset,” which packs powerful colors in a small rapid sketch.

The third room offers a wealth of highlights as visitors enter into the 20th century. Here we see James McNeill Whistler’s Venice pastels, which are remarkably displayed in the striking original frames that he designed. His “The Church of San Giorgio Maggiore” offers a sense that subject and material have perfectly collided — how else could the brilliant blues and subtle reds of Venice be captured other than in these small, memorable pastels?

William Merritt Chase’s “Study of Flesh Color and Gold” is spectacular in person, blurred, blunted and delicate, with astonishing drapery and almost devastating softness. There’s a boldness to this work, though, that is belied by the beauty. This piece also suggests exactly what the medium can do, mixing strong lines, blurred, brilliant colors and vivid textures. It pops the minute you enter the room.

There’s another glorious piece in this space, Henri Matisse’s “Woman with an Exotic Plant,” a rarity for the artist who only experimented with the material for a few brief periods. But it highlights the throughline from the first room, a return to the portraiture of the 18th century combined with a new way to embrace the focus on material and texture.

This not-to-be-missed pastel embodies how artists ran with the possibilities of the medium, employing thick lines, rich colors and an array of patterns. It also speaks to the pioneering techniques that artists try when using pastel, as Matisse drew it on paper covered with sawdust to allow the thick lines to transfer immediately — and almost flimsily — onto the page. There’s a swiftness to this approach, but it doesn’t ignore detail or sharpness.

It’s easy to see the fragility of these works, but that also lends them a power and a specific, unforgettable beauty.

The Touch of Color: Pastels at the National Gallery of Art