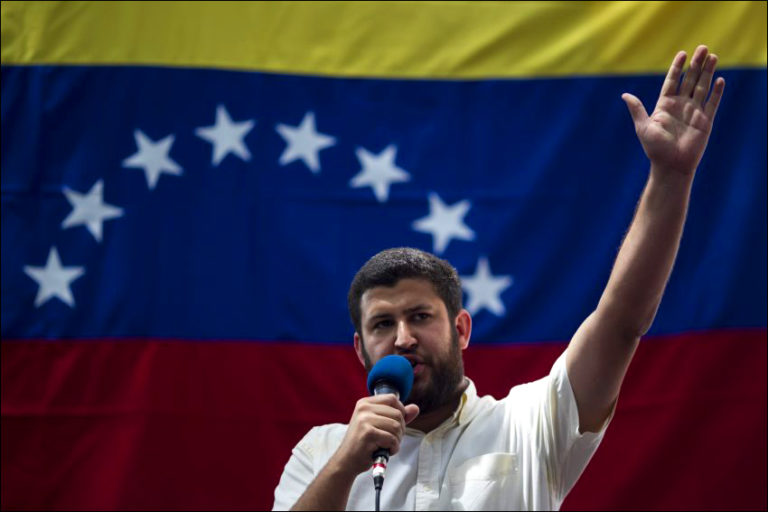 As many as seven million Venezuelans will have fled their country by the end of this year if borders with neighboring countries reopen and President Nicolás Maduro remains in power.

This stark warning comes from one of those refugees: David Smolansky, special envoy on Venezuela’s migration crisis at the Washington-based Organization of American States (OAS).

To date, he said, 5.4 million people have emigrated since the beginning of Venezuela’s economic crisis in 2014—making it the largest refugee crisis in Latin American history and the second-largest in the world after Syria (6.7 million).

That’s up from two million refugees in September 2018, when OAS Secretary General Luís Almagro appointed Smolansky to head the organization’s working group on this crisis. Those numbers can be found in his office’s Venezuela situation report issued on Dec. 30.

“Venezuela is not a conventional dictatorship,” Smolansky told the Washington Diplomat in a recent phone interview. “Unfortunately, it has become a criminal state with a regime that has been in power for 22 years. Latin America has been the victim of so many dictatorships—but it’s even worse for Venezuela, because the pillars that sustain Maduro’s regime are diverse. They have the support of Iran, Cuba, China, Russia and Turkey. All have become very close allies.”

In particular, he said, Turkey’s President Recep Tayyip Erdoğan is helping Maduro evade US sanctions through money laundering derived from illegal mining. The regime also stays in power by drug trafficking and the smuggling of food, medicine and even gasoline—an irony considering that Venezuela sits on the world’s largest crude oil reserves.

“The only solution is regime change,” the OAS official warned. “That could lead to a democracy with rule of law and independent branches of government. The longer Maduro stays, the longer people are going to flee.”

Exodus from Venezuela: History repeats itself

Smolansky, 35, knows a thing or two about fleeing totalitarian regimes.

In 1927, his Jewish grandparents escaped anti-Semitic pogroms in Ukraine—then part of the USSR—and settled in Cuba, where they lived for 43 years. Then in 1970, when Smolansky’s father was 13 years old, they left Fidel Castro’s Cuba, ending up in Venezuela.

“Not only did my family have to flee communist regimes twice—the Soviet Union and Cuba—but now I’ve had to flee a dictatorship,” he said. “As a human rights activist and as the son of a Jewish father and a Catholic mother, I learned about tolerance at home.”

Smolansky earned a journalism degree at Universidad Católica Andrés Bello in Caracas, then did a master’s in political science at Universidad Simón Bolívar, and eventually won a scholarship to Georgetown University. His political career took off in 2007 as an outgrowth of the Dec. 2 referendum of that year, in which voters rejected efforts by then-President Hugo Chávez to amend the constitution to remove presidential term limits.

Along with his college friends Leopoldo López, Juan Guaidó and others, Smolansky co-founded the Voluntad Popular political party.

“I know Guaidó very well. We have known each other for 14 years,” Smolansky said. “He was studying engineering at the same university as me, and we were part of those protests together.”

In 2013, at the age of 28, he was elected mayor of El Hatillo, a Caracas suburb—thereby becoming the country’s youngest mayor. “We led one of the most transparent administrations in Venezuela,” he said. “El Hatillo had the country’s highest rate of kidnappings per capita, and we were able to decrease that by 80%.”

But his increasing opposition to Maduro, Chávez’s handpicked successor, made Smolansky unpopular with the ruling establishment. In August 2017, he was removed from office, and Venezuela’s Supreme Court issued a warrant for his arrest.

“I spent 35 days in hiding and had to shave my beard. I decided to flee Venezuela disguised as a seminarista,” he said, recalling the harrowing adventure made possible by a fake ID and priestly garments. “Traveling more than 1,000 kms by car, I went through 35 checkpoints but they didn’t recognize me, finally crossing the border into Brazil.”

In April 2018, after making Washington his new home, Smolansky appeared on the cover of Americas Quarterly as one of 10 people the magazine predicted would one day help rebuild Venezuela after Maduro is gone. Less than a year later, in February 2019, then-President Donald Trump presented Smolansky to fellow Venezuelan expatriates during a Miami rally.

“Sadly, David is the third generation of his family to flee the agony of socialism and communism,” Trump told the crowd. “As David said, ‘the difference I want to have from my father and grandfather is to go back to my country. My grandparents never went back to Kiev. My father has not been back to Havana. I hope I can soon return to Venezuela.’ I think that will happen, David.”

The largest share of Venezuelan refugees have fled over the border to Colombia, which is home to 1.7 million Venezuelan nationals. But other nearby countries are sharing the burden as well, with over one million Venezuelans in Peru, 500,000 in Chile, about 400,000 in Ecuador, 300,000 in Brazil and 200,000 in Argentina.

According to Smolansky’s office, before the COVID-19 pandemic hit, about 5,000 Venezuelans were leaving the country daily. But in March 2020, border closures and lockdown measures throughout the region changed the dynamic. More than 134,000 Venezuelans came back—the vast majority from Colombia—when they lost their livelihoods in host countries and wanted to be close to their families.

Yet many of these returned Venezuelans were stigmatized and criminalized by the Maduro regime, according to the OAS. With the situation at home worsening, some of these Venezuelan returnees have begun to re-enter Colombia; between 500 and 700 people may be leaving daily through irregular routes.

Chile, in particular, has seen a jump in the number of Venezuelans entering via such routes, from 101 in 2018 to 4,226 in 2020. In addition, more and more Venezuelans are risking their lives trying to leave by sea routes. At least 33 would-be refugees have died so far trying to reach the nearby twin-island republic of Trinidad & Tobago.

On Feb. 8, Colombian President Iván Duque announced that his government would provide temporary legal status for 10 years for all Venezuelan migrants in his country—a decision hailed by Filippi Grande, head of the UN Refugee Agency, as “historic” and “the most important humanitarian gesture” in Latin America in decades.

Smolansky said that Almagro, the OAS secretary-general, “has been a champion in denouncing human rights violations in Venezuela,” and that the institution early on published a damning report describing the illegal detentions and torture inflicted by the Maduro regime against its opponents.

Most of the 46 member states of the OAS recognize Guaidó as the interim president. In fact, Venezuela’s ambassador to the OAS, Gustavo Tarre, was appointed by Guaidó, not Maduro, he said. “So that’s a huge victory in the diplomatic world.” Not surprisingly, the Venezuelan Foreign Ministry called the April 2019 decision a “criminal and rampant violation of international law and the OAS Charter.”

Yet all efforts to dislodge Maduro from power have failed. Smolansky is frustrated, but clearly has not given up. With Trump gone, the young politician said he expects the Biden White House not to reverse course but instead keep up the sanctions against Maduro. Secretary of State Tony Blinken has already said the 2018 election in which Maduro won re-election was clearly a fraud.

“In Washington, the cause of Venezuela is bipartisan. The best evidence of that was at the 2020 State of the Union speech, when Guaidó was invited. Even in a country that’s polarized at the moment, everyone went up and applauded,” Smolansky said. “At the end of the day, the Maduro regime is a threat to democracies in the region, and the United States needs to understand that.”