Home The Washington Diplomat November 2012 ‘Once Upon a Time,’ Almería Was Home to Cowboys and Cleopatra 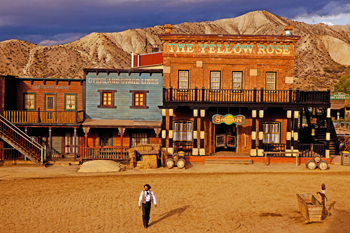 D.C.-based photographer Mark Parascandola documents the legacy of filmmaking in Almería, Spain, which served as the backdrop in films such as “Lawrence of Arabia” and Sergio Leone’s Spaghetti Westerns but today resembles an eerie Hollywood ghost town of abandoned movie sets.

In a tiny province on Spain’s southeastern coast, Clint Eastwood rode into town as the “Man with No Name” in Sergio Leone’s “Dollars” trilogy; George C. Scott entered Palermo as General Patton; Peter O’Toole helped to blow up a Turkish train convoy in “Lawrence of Arabia”; and Sean Connery, quoting Charlemagne, thwarted an attack by a Nazi fighter pilot with an umbrella and a flock of seagulls in “Indiana Jones and the Last Crusade.”

Hundreds of movies have been filmed in Almería, Spain, whose Hollywood heyday lasted though the 1960s and ’70s.

An exhibit by D.C.-based photographer Mark Parascandola, now on display at the Embassy of Spain as part of its wide-ranging “Spain arts & culture” series of programs, documents the legacy of filmmaking in Almería. The show features architecture and locations used in classic films, including historic landmarks and entire towns constructed for movie sets that still rise in the desert, like remnants of an extinct civilization.

Before it was discovered by Hollywood, poet and playwright Federico Garciá Lorca found inspiration for his play “Bodas de Sangre (Blood Wedding)” in Almería. In a panoramic print, Parascandola captures the Cortijo del Fraile, a once-grand estate built by Dominican friars in the 18th century and later the scene of a tragic murder that inspired Garciá Lorca’s play. It also played a role in Sergio Leone’s “The Good, the Bad and the Ugly.”

The sunny desert landscape — which could easily morph from the American Southwest to Bedouin Arabia — and cheap labor first attracted filmmakers to Almería in the 1960s. It was the backdrop for Leone’s Spaghetti Westerns, films that redefined the genre. The region soon drew the Oscar-winning casts of “Cleopatra” and then “Lawrence of Arabia” along with millions of film industry dollars. 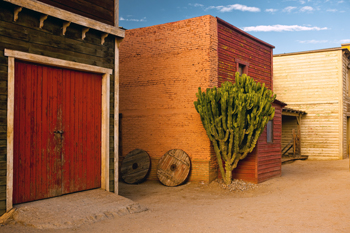 When the film industry arrived in the 1960s in this remote region of Franco-controlled Spain, it brought with it hope for economic prosperity. Decades later, the movie industry has largely abandoned Almería for cheaper shooting locations, leaving behind film sets as a reminder of their fleeting, imaginary civilizations. Some have fallen into disrepair, mirroring the decline of Westerns as a popular genre, while others have found new life as tourist attractions. Parascandola’s images of the ramshackle remains of the fort built for the movie “El Condor” and the crumbled façades of Western towns convey a sense of abandonment and decay.

The boom-bust cycle of the region is also apparent in Parascandola’s photo of the grandiose, 400-room Algarrobico hotel, which was built overlooking the beach that doubled as the port city of Aqaba in the film set for “Lawrence of Arabia.” The controversial hotel, built during Spain’s construction boom following adoption of the euro, was nearly complete in 2006 when a judge ordered it demolished for violation of environmental laws. Like the Western film sets, it too has become a ghost town.

But these images of Almería’s ghost towns also reveal a capacity for reinvention.

One image shows the main street of “Mini-Hollywood,” a mock-up of a Western town built for Leone films. These days, it’s a tourist trap, complete with costumed cowboys and saloon girls, where visitors can enjoy staged bank holdups and shootouts, or down a whiskey at the Yellow Rose saloon, formerly the hotel for Clint Eastwood’s character in “For a Few Dollars More.”

According to his website, Parascandola, an epidemiologist by training, “uses photography to explore patterns of movement in human populations, focusing on architecture as evidence of often-invisible social, environmental, and economic processes.”

“Almería has undergone many changes and repopulations over a couple of millennia,” Parascandola said. “It’s always been a point of transition between North Africa and Europe and so I think it has a fascinating history.”

In fact, since it was founded by the Caliph of Córdoba during the Islamic Umayyad dynasty in 955 AD, Almería has been conquered by Catholic monarchs, plundered by Berber pirates, mined by French and British iron companies, bombed by German planes, and finally, as part of Andalusia, granted regional autonomy in 1980.

Taken as a whole, Parascandola’s images tell a broader story about the ebbs and flows of civilization that have shaped the architectural, economic and cultural landscape of Almería for more than 2,000 years. In capturing part of this cycle of prosperity and plunder, decay and renewal, they remind viewers of the power of a civilization to re-imagine itself.

Once Upon a Time in Almería