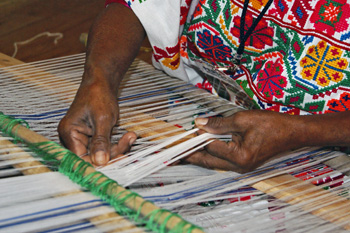 “Guerrero: Seven Regions of Art and Tradition” at the Mexican Cultural Institute

Behind a glass case at the Mexican Cultural Institute is an airplane begging to be touched.

Made of wood and brightly painted, it’s one of several toys in the institute’s new “Guerrero: Seven Regions of Art and Tradition” exhibit. A motorized rooster, carousel and Ferris wheel, all with moving parts and all meant to be played with, entice not just children, but adults, in the exhibit highlighting the diverse culture, geography and ethnic groups of the southern Mexican state of Guerrero. The toys, featured in the annual Temalacatzingo Toy Competition, join masks, woven goods, clay statues, jewelry and, yes, sombreros in the four rooms that make up the exhibit, co-sponsored by the Guerrero government and its Ministry of Culture.

Guerrero is home to seven distinct regions and four major ethnic groups: Mixtec, Nahua, Tlapanec and Amuzgo. Nathan Keegan, a press officer for the institute, said that attempting to convey the vast differences in cultural identities throughout Guerrero was challenging. 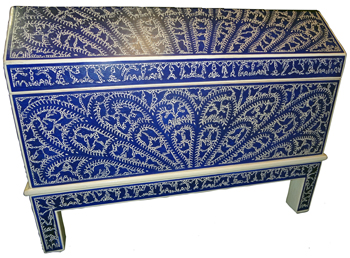 Keegan said that when most people think of Mexican traditional art, they think of neighboring Oaxaca. If they know Guerrero at all, it’s because of Acapulco, the world-famous resort destination. In the Acapulco region, crafts cater largely to the tourist trade, with quintessential sombreros, hammocks, calico blouses and other woven goods. But in the traditional markets of Acapulco, off the tourist track, more authentic goods are still made, bought and sold. It’s those items that are on display in the exhibit, alongside a near dizzying array of traditional handiwork.

In Guerrero’s mountain region, crafts created from the fibers of leaves include baskets and bags. This is the site of Temalacatzingo and its tantalizing lacquer toys. The central region is prized for its masks, a tradition dating back 2,000 years. Here mask-makers are revered members of the community, and the craftsmanship of the occasionally gruesome masks meant to ward off evil spirits has a nearly chilling effect hanging on the otherwise nonthreatening walls of the institute. The beaded clothing on display are the product of Costa Chica, and painstaking attention to detail. The artistic heritage of Costa Grande includes coffee-bean jewelry, while the hot and dry Tierra Caliente region produces sandals and sombreros.

Keegan said that many people are familiar with the work of regional artisans, even if they don’t realize it. This is especially true of crafts from the northern region, where the municipality of Taxco de Alarcón has been one of the foremost generators of silver in the world.

“I didn’t even realize it until this exhibit,” Keegan said, “but some of the pieces of silver I own have the markings of the region. Because of the sheer amount of exported silver, I think many people own jewelry from the region and don’t know it,” he said, nothing that due to over-mining, many of the area’s famed mines are now closed.

It would have been tempting to crowd the modest exhibit space with an overwhelming array of items, but the neatly organized display instead merely whets the appetite by highlighting examples of crafts and award-winning artists while grouping similar items, like festival masks, that showcase nuances across Guerrero’s richly eclectic terrain.

The exhibit strives to be many things, but one thing it’s not? Folk art. Keegan says the word will never appear in brochures or wall text. “Folk art, to some, can have a negative connotation. We wanted to highlight the tradition of cultures and crafts in this incredibly diverse region.”

Molly McCluskey is a freelance writer in Washington, D.C.