Home The Washington Diplomat July 2017 Op-Ed: Choices Made in War Can Lead to Lifetime of Invisible Wounds 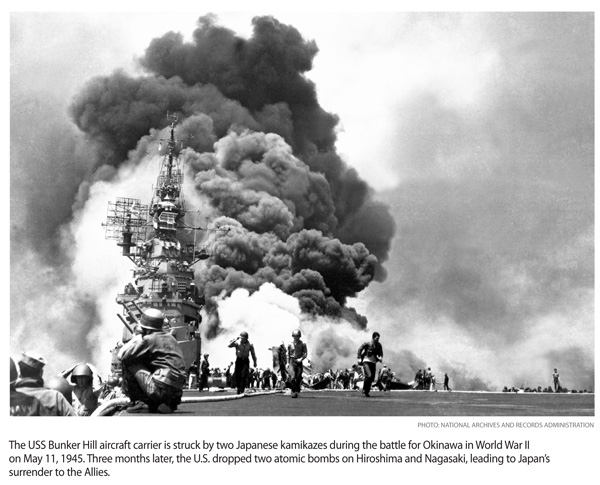 “My guilt will never go away,” former Marine and now veteran advocate Matthew Hoh explained. “There is a significant portion of me that doesn’t believe it should be allowed to go away, that this pain is fair.”

Somewhere in that sentence I found the voice of Lt. Nate Hooper, the main character in my new book, “Hooper’s War: A Novel of World War II Japan.” He was going to teach me about moral injury in war.

I wanted to write about what happens to people in war, combatants and civilians alike. The need to tell that story grew in large part out of my own experiences in Iraq, where I spent a year embedded with a combat unit as a U.S. State Department Foreign Service Officer, and where I witnessed two soldier suicides.

As I broadened my research for the book, I found myself speaking with more and more veterans who suffered in ways they had a hard time describing but which they wrestled with every day. They seemed to be trying out the words for the first time as they told me they went away with the wartime conceit “we’re the good guys,” and then spoke of a depth of guilt and shame when that good guy persona does not survive the test of events.

I came to know this as moral injury.

The term is fairly new outside of military circles, but the idea is as old as war, when people sent into conflict find their sense of right and wrong tested. As they violate deeply held convictions by doing something (such as killing in error), or failing to do something (such as not reporting a war crime), they suffer an injury to their core being. Think Tim O’Brien’s iconic Vietnam War book, “The Things They Carried,” or films like William Wyler’s 1946 “The Best Years of Our Lives” and Oliver Stone’s 1986 “Platoon.”

There are lines inside us that cannot be crossed except at great price. As Lisa Ling, a former Air Force technical sergeant working in the drone program told the makers of the documentary “National Bird”: “I lost part of my humanity.”

Society once expressed skepticism toward such ideas, calling sufferers cowards or dismissing them by saying it’s all in their heads. Yet today a sister illness to moral injury such as post traumatic stress disorder (PTSD) is widely acknowledged.

The two afflictions often occur together. Moral injury, however, takes place at the intersection of psychology and spirituality, and so, in a sense, is all in someone’s head. Moral injury applies guilt and/or shame as a penalty for a choice made. PTSD is more physical, more fear-based, often a reaction to something experienced, not chosen, and includes stresses like hyper-alertness in the absence of a true threat.

The setting for “Hooper’s War” evolved to World War II Japan, as I realized moral injury doesn’t just affect soldiers — the same as bombs and bullets don’t affect just civilians. I spent eight years in Japan as an American diplomat and speak the language well enough. That gave me the rare opportunity to interview now-elderly Japanese who lived through the war as children. They described the horrific choices they faced in a landscape of hunger and survival. Desperate people can be forced into desperate acts, and those, too, cause moral injuries that survive long after the conflict ends. In fact, sometimes those injuries don’t end until the sufferers do. I learned moral injury is a debt that has to be settled, one way or another.

One incident I wrote about focuses on a Japanese child seeing his neighbor killed by an errant American bomb. That changes him from an innocent boy into a soldier seeking revenge. It’s as if he was radicalized, a term we use today to describe how a peaceful person becomes a suicide bomber. 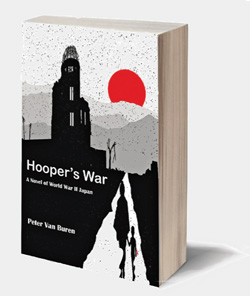 Through other research I came to understand that my own country committed acts of moral depravity on a massive scale: The U.S. followed a policy of targeting civilians through mass fire bombings of Japanese cities.

To fine-tune their use of firebombs, the U.S. Army Air Force even built a full-size Japanese village in Utah during World War II. They questioned American architects who had worked in Japan before the war, consulted a furniture importer and installed tatami straw floor mats taken from Japanese-Americans sent off to internment camps. Among the insights gleaned from this model village was the need for incendiary devices to be made much heavier than originally thought. Japanese homes typically had tile roofs. The early devices tended to bounce right off. A heavier device would break through the tile and ignite inside the structure, creating a much more effective fire.

The American campaign reached its peak of genocidal efficiency with the atomic fire-bombings of Hiroshima and Nagasaki. There was no territory conquered; the dead and their survivors had no means of influencing policy. This was bloodletting, raw and simple. It represented moral injury, to Americans, on a national level.

What help can there be for something so human as moral injury?

For individuals, there are bad answers, which all too often include opioids and alcohol. Drinking and drugs wipe away hours when there are too many of them, all the way back to 1945 sometimes. You drink in the dark places, even after you understand you can still see too much in the dark.

Tragically, suicide is never far from moral injury. The soul isn’t that big a place.

One soldier told me he’s never forgiven his neighbor for talking him out of going into the garage with his rifle. Another said the question wasn’t why he might commit suicide, but why he hadn’t. The Department of Veterans Affairs counts an average of 20 vet suicides a day. About 65 percent of those are individuals 50 years and older with little or no exposure to the most recent conflicts. The pain that grows out of moral injury can be patient, a drop of water swelling on the end of a faucet.

Progress is being made, though the trip back is as complex as the individual, and the most effective treatments are still evolving. The Department of Veterans Affairs now acknowledges moral injury and its effects, and Syracuse University created the Moral Injury Project in 2014 to bring together vets, doctors and chaplains. Psychologists are developing diagnostic assessment tools.

One path is helping a patient understand what happened and their own responsibility, though not necessarily their fault, for transgressions. What doesn’t work, according to Matthew Hoh, now a senior fellow at the Center for International Policy, is lying — the all-too American obsession with telling veterans who view themselves as damaged that they are really heroes.

Drone warrior Lisa Ling traveled to Afghanistan wanting only to understand her role in the drone program, but during an encounter with the relatives of victims, was forgiven by them. “I didn’t ask for forgiveness,” Ling told me, “because it was unforgivable.”

“Like all of us,” Ling continued, “I spent time on the mission floor, or at briefings where I saw and heard devastating things or blatant lies, but to actually connect my individual work to single events wasn’t possible due to the diffusion of responsibility. For sensor operators, it is more like stepping on ants. For analysts, they get to know people over time. As watchers and listeners, they describe an intimacy that comes with predictably knowing the targets’ family patterns — kissing the kids, taking children to school — and then seeing these same people die.”

Another way back is for the sufferer to make amends of some sort, to balance the scales. To amend means changing something already done, and in the case of moral injury, that translates into drawing a line between who a person was then and who a person can be now. Iraq War whistleblower Chelsea Manning’s decision to leak video of civilian deaths may have been a form of amends, driven by her guilt over silently witnessing that and other war crimes.

The goal of all methods is the same: to reclaim the good parts of one’s self and to accept — but not be defined by — what one did or didn’t do.

“You mean that Vietnam helicopter thing?” a well-meaning family doctor asked me when I got back. “No, no, something more,” I said. I told him that the anemic role I played as a diplomat in Iraq administering reconstruction projects left me more interested in vodka than my family. That was my taste of this phenomenon, a failure to have accomplished the good I’d hoped to do.

I wrote “Hooper’s War” in reverse chronology. Hooper lived all those years with the things he had seen and done, and I want the reader to feel those repercussions just as those suffering from moral injury do. Everyone can relate because everyone at one point says, “If only I had…” — referring to the handful of seconds that add up to a lifetime of regret and second-guessing.

The book ends with Hooper as a boy as far away in rural Ohio as one can be from Japan. You see the darkness, but you can also see the light. That is where the reader ends up, so there is a winner, of sorts. Not always so much in real life.

Peter Van Buren is a former Foreign Service Officer who is the author of “Hooper’s War: A Novel of World War II Japan” and “We Meant Well: How I Helped Lose the Battle for the Hearts and Minds of the Iraqi People.”