The United Nations was not even three years old when it launched its first peacekeeping mission in 1948. For the last 70 years, it has been continuously involved in such operations. Over that time, the conflicts to which peacekeeping has been applied have changed. As a result, the tasks assigned to peacekeepers have evolved from ones that were straightforward to those that were highly complex.

As this evolution continued, in the most recently launched operations, peacekeepers have been given mandates that are impossible to accomplish. That is because peacekeeping has become a way for rich countries to send the soldiers of poor countries off to deal with wars the rich countries do not care all that much about.

To understand why this is the case requires a discussion of what peacekeeping is, the conditions it needs to succeed and how today’s conflicts do not meet those conditions. This history also explains why, in each of the seven decades of United Nations peacekeeping, the number of peacekeepers who died on duty has grown, with the total now more than 3,800.

Today, there are 14 U.N. peacekeeping missions employing nearly 100,000 soldiers, police and civilians at an annual cost of almost $7 billion. The current missions reflect the three stages of peacekeeping’s evolution. The oldest among them, launched in response to wars between countries over territory, can be described as classical peacekeeping. The second stage involved multidimensional operations, in which peacekeepers have undertaken a wide variety of tasks to help countries recover from civil wars. The most recently launched operations exemplify the third stage, protection and stabilization missions, in which peacekeepers have been given a mandate to protect civilians and aid governments that are threatened by violent extremism.

In classical peacekeeping operations, the peacekeepers had the uncomplicated assignment of monitoring a demilitarized zone between two armies following a war between countries over territory. The goal was to allow both sides to have the confidence that neither was taking advantage of a ceasefire to improve its military position. The combatants had a wide variety of weapons at their disposal, but they were generally disciplined military forces that attacked each other. So while the work had its risks, the peacekeepers were not targeted.

Ironically, wars between countries over territory, which is what the United Nations was established to help prevent, are very rare today. But the cause of the war — the territorial dispute — is never easily settled. As a result, classical peacekeeping operations can be endless, providing only the illusion of peace.

Take, for instance, the first two operations the U.N. launched: United Nations Truce Supervision Organization (UNTSO), headquartered in Jerusalem, and United Nations Military Observer Group in India and Pakistan (UNMOGIP) in disputed Kashmir. Even though they both have been going on for more than 70 years, neither shows any sign of ending. The problem with classical peacekeeping is that, while it presents peacekeepers with a manageable assignment, ending it can prove impossible because it requires the parties to agree on where the imaginary line on a map called a border is to be drawn.

If a line is drawn, politicians on one or both sides of it will complain that their country lost out in the bargain. To avoid the perception of defeat, political leaders will refuse to negotiate seriously, preferring the status quo indefinitely to being accused of surrendering some of the territory over which the war was fought.

Six of the 14 current operations involve classical peacekeeping. UNTSO, UNMOGIP, United Nations Peacekeeping Force in Cyprus (UNFICYP), United Nations Disengagement Observer Force (UNDOF) in Syria, United Nations Interim Force in Lebanon (UNFIL) and United Nations Mission for the Referendum in Western Sahara (MINURSO) have been in existence for a combined total of more than three centuries, yet there is no prospect of any of them being brought to a successful conclusion. For instance, because the U.S. government has said it recognizes Israel’s sovereignty over the territory it occupies on the Golan Heights, and because Syria is not going to give up its claim to the land, UNDOF is unlikely to end — possibly ever.

If the United States wants to save money on peacekeeping, it should push to close all six classical operations (and the non-U.N. mission in the Sinai). If the countries involved and their main supporters want to retain the peacekeepers, they should be required to pick up the tab. 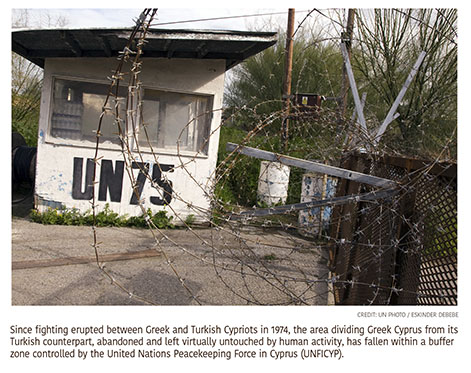 As the colonial empires of the European powers fell apart following World War II, many of the new nations that emerged did not have a smooth transition to independence. Civil wars broke out as different factions fought for control of the government. These wars were waged in poor countries where, in a struggle for political power, the winner takes all and the loser is out of luck. As undisciplined armed groups clashed in these struggles, civilians thought to be supporting the other side became targets. Humanitarian disasters resulted as the noncombatants responded by fleeing the fighting, often becoming refugees in neighboring countries.

Once a ceasefire was established in these wars, peacekeepers could be sent. They brought a long list of goals to accomplish to help the peace become permanent. The list could include demobilization of most of the former combatants, helping them reintegrate into civilian life; forming a new national army that was not loyal to only one faction; aiding refugees and displaced persons to return to their homes; providing humanitarian aid and development assistance to restart the economy; and holding elections in a country with little to no democratic experience.

Given the cost of such operations — thousands of peacekeepers are required — there has always been pressure to achieve all the objectives on a tight schedule. If the elections produced a government with a measure of legitimacy, the peacekeepers could declare success and depart.

While the United Nations has had mixed results in its multidimensional peacekeeping missions, they are, at least for the moment, largely a thing of the past. Of the current missions, only two are multidimensional. Actually, it would be more accurate to call them unidimensional now because their objectives have been drastically reduced over the years. Today, they are small operations limited to attempting to professionalize the police in Haiti and Kosovo.

The remaining six current operations are all in sub-Sahara Africa, and they represent the latest evolution of U.N. peacekeeping missions. They are the protection and stabilization missions and they are the most dangerous and difficult ones with which peacekeepers have had to deal.

Peacekeeping in the Face of Violent Extremism

Traditionally, three principles have guided the conduct of peacekeepers: One, they became involved only at the invitation of the parties to the conflict; two, they were to be strictly neutral; and three, they were to use force only in self-defense. If these principles were not adhered to, a situation was created that could prove disastrous.

The rise of terrorism is the reason the final stage in the evolution of peacekeeping has become so dangerous. Perhaps reflecting the lack of an agreed definition of terrorism, many in the United Nations and elsewhere prefer to use the term “violent extremism.” Terrorists are indistinguishable from noncombatants. They will use any type of weapon, and their objective is to kill innocent people to bring attention to their cause. Whatever it is called, when extremist violence comes into play, there is no role for peacekeeping. Yet peacekeepers are being asked not only to protect civilians, but often to help the government stabilize the situation and extend its control over its own territory in countries threatened by extremists.

This violates all three of the traditional principles of peacekeeping and makes the peacekeepers targets. The prospect of such attacks has accelerated the trend among rich countries to decline to provide peacekeeping troops. As the operations changed from the classical variety to multidimensional missions and as the number of casualties grew and some of the missions, like the one in Angola, failed, the enthusiasm for participating waned. As peacekeeping evolved further into the protection and stabilization missions now underway in Africa, the interest of developed nations in putting their troops at risk virtually disappeared. 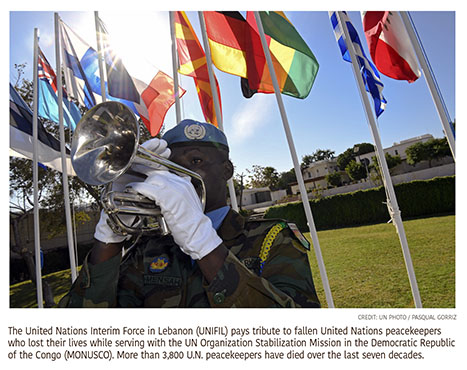 To make matters much worse, the five countries where these protection and stabilization missions are taking place — Mali, Sudan, South Sudan, the Central African Republic and the Democratic Republic of the Congo — have governments that are among the most corrupt, repressive and incompetent in the world. One need only to look at their corruption rankings by Transparency International, their political liberty rankings by Freedom House or their governance scores on the Ibrahim Index to confirm that.

In addition, these countries are not particularly interested in protecting their own citizens. Their armies and police exist mainly to protect the government and not the nation as a whole or its people. Enhancing the capability of security forces alone will only strengthen their ability to keep that regime in power and to suppress any democratic alternatives.

Because the wealthy nations with the most capable (and expensive) armies are unwilling to provide a significant number of troops, this most dangerous and difficult type of peacekeeping is left largely to poorly equipped and untrained soldiers from developing countries who are not going to defeat violent extremism. If the United States cannot prevail against violent extremists in Afghanistan after 18 years of trying, there is no chance that the available peacekeepers can in Africa. And asking peacekeepers to die protecting the citizens of a country whose government refuses to protect its own people is unlikely to inspire them to make that sacrifice.

The fundamental problem is that there is no peace to keep and U.N. forces are incapable of imposing one because they are peacekeepers and not warfighters. Peacekeeping is a bandage, not a cure for the scourge of violent extremism. At best, it can stanch the bleeding but cannot heal the wound. But it is used nonetheless, because it is the easy alternative and it allows the U.N. to be used as a convenient scapegoat.

Neither peacekeepers, nor the typical reaction of governments — more violence — will be able to prevent violent extremism. There is another approach that holds promise. In 2017, the United Nations Development Program interviewed 495 young African men who had voluntarily joined violent extremist groups. The study found they were motivated by a sense of grievance toward, and a lack of confidence in, their governments. For them, the extremist ideologies were a way to escape a future without hope. The study concluded that improved public policy and governance was a far more effective response to violent extremism than a military one.

However, the governments in the five countries where the protection and stabilization missions are taking place will not lessen their corruption, repression and incompetence simply because it is the right thing to do. These countries, being as underdeveloped politically as they are economically, have weak legislative and judicial branches and little in the way of civil society or press freedom. The incentive to govern better will have to come from internal pressure and outside forces. Unfortunately, the autocrats need not worry too much. It is doubtful that the international community has the will, attention span and unity to make that happen.

Dennis Jett is a professor of international affairs at Penn State University. His 28-year career in the U.S. Foreign Service included assignments as ambassador to Peru and Mozambique and in Argentina, Israel, Malawi and Liberia. The second edition of his book “Why Peacekeeping Fails” has recently been published.