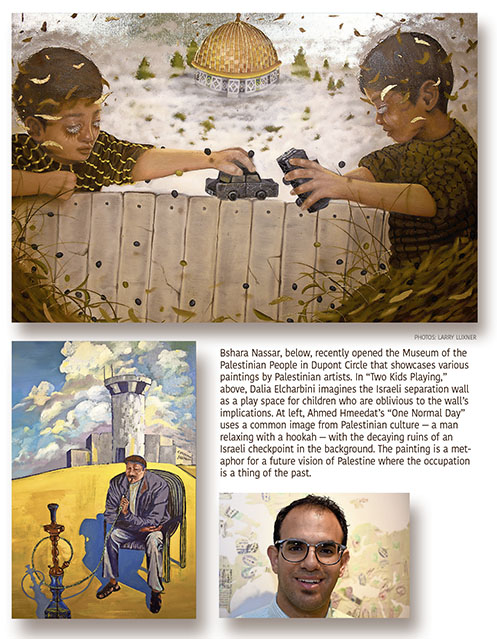 The Museum of the Palestinian People (MPP), located along 18th Street in Dupont Circle, opened its doors June 15.

The capital city’s latest cultural attraction is a small one — currently about the size of a large one-bedroom apartment — but it has big plans. Even now, despite its size, it’s one of only three or four institutions around the world to showcase the history and culture of the estimated 13 million people around the world who identify as Palestinian Arabs.

Bshara Nassar, a 31-year-old businessman who was born in East Jerusalem and raised in Bethlehem, conceived MPP shortly after moving to Washington in 2011.

“As a tourist, I was really astonished by all the museums, memorials and monuments here. So many immigrants have come to Washington and built institutions that would tell their stories: the Italians, the Greeks, the Jews, African Americans, Native Americans,” he told us. “But I could not find a museum or space that would share our story as Palestinians, so I started working on the idea, and questioning what it would take to establish a museum in D.C.”

Nassar turned to Palestinian artists — both here and in the Middle East — such as Ahmed Hmeedat, Manal Deeb, Mohammed Musallam, Dalia Elcharbini and Haya Zaatry.

“In June 2015, we had our first exhibit of photography, paintings, stories and videos in Adams Morgan. That lasted for a couple of weeks. Universities and churches around the country began calling us and sponsoring us. That’s how this exhibit started, evolved and grew,” he said.

Eventually, the traveling exhibit visited more than 50 locations across the country before finding its permanent home in Washington.

Last year, said Nassar, this corner space in an old brownstone was offered to him rent-free by an American family “who really cares that Palestinians have a voice in Washington.” Before that, it was used as offices and storage for the Washington Report on Middle East Affairs.

MPP is open three days a week — Thursday, Friday and Saturday — with visitors paying a $5 entry fee. Between staff and volunteers, it employs 15 staffers including a part-time curator, Syrian artist and activist Nada Odeh.

Artifacts come from “people supporting the museum, and of course Palestinians who care about telling their story,” said Nassar. Besides paintings, these artifacts include everything from an ancient Nabatean vase made of glazed ceramic dating from 300 B.C., to Palestine identity cards issued during the British Mandate, to an embroidered Palestinian silk thobe, or dress, from the early 1900s.

So far, about $200,000 has been invested in the project, although Nassar said he’d like to expand the museum from its current 900 square feet to about 5,000 square feet. To accomplish that, he’s considering purchasing the Laogai Museum directly across the street.

Nassar, MPP’s founder and director, has a master’s degree in conflict transformation from Eastern Mennonite University in Harrisonburg, Va. In 2014, he founded the Nakba Museum Project. His family’s farm, dubbed “Tent of Nations,” is currently engaged in a legal battle with several nearby Jewish settlements.

“My family has been in the courts since 1991. So my inspiration for creating this museum came from my family’s continuing nonviolent struggle to keep their farm from being confiscated,” he explained. “We’ve had a lot of supporters throughout the past couple of years.”

High on that list is Fritzi Cohen, original owner of the nearby historic Tabard Inn. Cohen, who is Jewish, offered the museum space last year for a fundraising event and donated all the food. Cohen plans to do it again, on Sept. 28, for another fundraiser to benefit the museum.

Also on that list of supporters is Ari Roth, founding artistic director of the Mosaic Theater Company of DC.

“All of us who value the quest for peace and justice in Israel/Palestine salute the opening of this museum as a gathering place to humanize history and the headlines that emanate from that region,” Roth said in a press release. “In Mosaic’s many partnerships with MPP, we have been sensitized by the fledgling museum’s curation of cultural assets and skillful teachings in making audiences aware of Palestinian culture, art and history. Its emphasis will be on people — and peoplehood — less a place of political proclamation and more a space for sowing seeds of transformed perception and empathic connection.”

Nassar said the museum has no connection whatsoever with the State Department-ordered closing last September of the PLO Mission in D.C., less than two miles to the west. Nor has it received any official visits from the Palestinian Authority, headquartered in Ramallah.

Politics aside, he said, “We would like to inspire new generations of Palestinians and give them hope — especially those in the West Bank and Gaza who feel they don’t have a voice. It’s hard for us to imagine a future that’s different from what we’re living right now. So we want to challenge Palestinians and visitors to look at the future in a different way.”

Nassar said 500 people stopped by the weekend his museum was inaugurated.

“This is not just about presentation. We’re also trying to have a conversation with people,” he said. “We welcome Israelis and Jews who don’t necessarily agree with us. In fact, we want people who disagree with us. This is where the impact happens.”