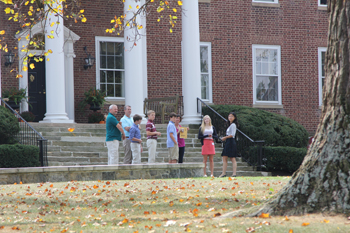 Like many American parents around the country each fall, Washington diplomats are packing away their children’s camping gear and bathing suits and preparing them for school — or, in some cases, picking out the right school for them.

For some, it will be their little one’s first foray away from home and into the world of classmates and teachers. For others, the challenge is twofold: a new school in a foreign country.

“As a parent, I would want to know what kind of curriculum the school follows, how they engage their children and what sets them apart from others,” said Vanena Wilmot, the parent of a second-grader at Lycée Rochambeau, an international French school in Bethesda, Md.

Amy Painter, director of communications at the Saint James School in Hagerstown, Md., said open houses allow parents to really get a feel for a particular school.

“We want them to gain a sense of the unique spirit of our school, and a sense of our warm and engaging community,” she told us. “There is nothing like the experience of being in our community and seeing our beautiful campus. Open houses offer families the chance to see and feel this for themselves. In addition, open houses provide the opportunity for parents to interact and to get to know one another, in addition to our students and faculty.”

The German School Washington D.C., originally created to meet the needs of parents who work at the German Embassy (the student body is still mostly comprised of diplomats’ children), opens its November open house to everyone including students and local community members.

“Our students come from all over the world and almost all of them have been a ‘new kid’ somewhere,” said Sean Gaetjen, the German School’s admissions coordinator. “This makes them particularly welcoming of all of our new students when they arrive, making sure they get everything they need and feel comfortable in the school and larger community.”

One parent, who drove all the way from Pittsburgh to Potomac, Md., where the school is located, to attend the open house, was eager to learn more about how his children could receive a German education in an intercultural setting here in the United States. The emphasis on language is unsurprisingly the first thing that piques the interest of parents seeking to enroll their children in international schools. 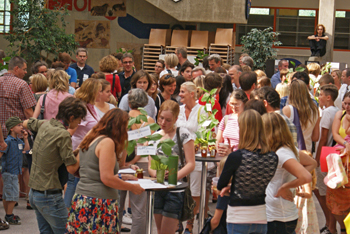 The German School Washington D.C., originally created to meet the needs of parents who work at the German Embassy (the student body is still mostly comprised of diplomats’ children), opens its November open house to everyone including students and local community members.

“We chose the French system because I’m from Madagascar, and the majority of our family speaks French. So we wanted our daughter to learn the language correctly and well,” said Wilmot. “She learned more than language at Rochambeau, however. From a very young age, my daughter learned how to correctly arrange a place setting, for example, and wait until everyone else at the table received their setting before eating.”

Parents who attend open houses at Rochambeau often ask about the level of language instruction at the school. While many think the school only focuses on the French language, it actually expects students to become fully bilingual and fluent in English as well. For the aspiring young polyglot, Spanish is taught as young as second grade and other languages include Arabic, German and Latin.

“It is this diversity of languages and cultures that truly makes our school unique,” said Rochambeau Director of Development Mimi Fairman. “We have students from over 30 embassies, the World Bank, IMF, IDB and many other international organizations.”

Lycée Rochambeau hosts several open houses each year at two of their three campuses: Bradley for the preschool and kindergarten program, and Rollingwood for students in first to third grade. The events are held on both weekdays and weekends, allowing parents to bring their children along if they choose. Parents with students in fourth through 12th grades are encouraged to schedule one-on-one visits at the third Rochambeau campus, Forest Road. Older students can also shadow a class for all or part of the day.

“The overall goal is for families to understand the programs we offer and the advantages they would have in their children attending a multilingual, multicultural school such as ours,” said Fairman.

After organizing various formats of open houses over the years, most schools have received similar feedback from parents: They want to see the school in its natural setting and how their child would experience it if he or she were to enroll.

Saint James, which is holding its upcoming open houses on Oct. 4 and Jan. 19, encourages its teachers to be themselves. “We ask them to be open and honest, and to interact with the families. We want them to be themselves,” Painter said of the school, which is home to the children of diplomats from the IMF, World Bank and United Nations.

“We don’t want our open house to be orchestrated or micromanaged,” said Anna Ellenbogen, director of admissions and marketing for the British School of Washington, one of the area’s top private international schools, with students hailing from over 60 nationalities. 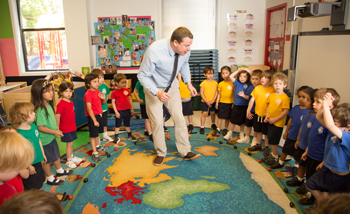 The British School of Washington is one of the area’s top private international schools, with students hailing from over 60 nationalities.

When the British School first began to hold open houses, the events would not take place the whole day. However, school administrators changed the format to full-day open houses after realizing that parents wanted to drop in freely throughout the day without having to make an appointment. After signing in, they can observe any class they’d like without being limited to the grade in which their child will enroll. Occasionally, educators from other schools will also sit in on classes to experience different methods of teaching.

“Nothing is different on the day of open house apart from the learning objectives displayed outside of every classroom to inform parents,” said Ellenbogen. “We don’t make any changes — except maybe the teachers will try to dress a little nicer than usual.”

At the German School, open houses were traditionally held during weekends, and while this gave parents more flexibility to attend, it was not necessarily an accurate representation of what school operations typically looked like. Then the school decided to move the event to a weekday to show parents their students and teachers “in action.”

“We also do everything in both English and German during our open house in order to accommodate our parents who speak only English,” said Gaetjen. “In the past, the open house was conducted in almost all German, which left some parents who do not speak the language left out. Over the last several years, however, everything has been bilingual and the response from parents and the community has been overwhelmingly positive.”

Painter said parents who visit Saint James ask a range of questions. “They ask about boarding and how it works. They also ask about financial aid and how that works, as well for information about our application process. In addition, they have questions about our academics and athletics programs, in particular.”

Just as much as open houses provide valuable insight for parents of prospective students, they are also used by schools to gauge how they can better meet families’ needs. With many children of diplomats and top-level officials attending international schools, safety is inevitably a question that frequently comes up.

“Security precautions are a concern for all, of course, but especially for diplomatic families,” explained Ellenbogen. “We take the time at open house to explain safety measures we take at our school [to alleviate these concerns].”

The German School takes advantage of each open house to immediately begin preparing for the following one. Teachers and faculty will meet after each event to discuss lessons learned and how the experience can be improved for all.

“We want to show a bright, full, happy school where students love to learn and teachers love to teach,” said Gaetjen.