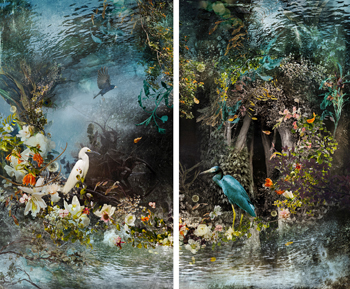 Ysabel LeMay’s “Reflection” is part of “Organic Matters—Women to Watch 2015.”

Nature was long considered safe territory for women artists. As the National Museum of Women in the Arts (NMWA) points out, subject matter relating to the natural world seemed a natural fit for women because it merely required observation, whereas religious or historical subjects required imagination and analytical thinking — qualities that apparently only men were thought to possess.

NMWA’s latest exhibits, however, are about as far away as you can get from safe and unimaginative, turning those sexist assumptions on their head.

“Organic Matters—Women to Watch 2015,” part of a biennial exhibition series NMWA hosts to present emerging or underrepresented artists from around the world, celebrates the relationship among women, art and nature. The wide-ranging show, which includes photography, drawing, sculpture and video, features fantastical landscapes (both real and imagined), fragile ecosystems and women’s complex views on the theme of nature.

A companion exhibit, “Super Natural,” focuses on women artists’ “unrestrained absorption with nature,” as seen in a diverse array of works that depict unique plant specimens, seldom-seen creatures and the artists’ own bodies fused with natural backdrops. 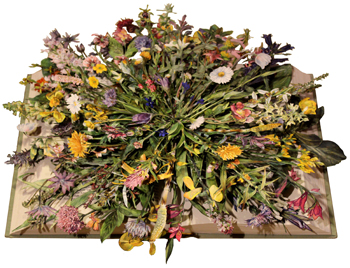 Like the artists in “Super Natural,” the women in “Organic Matters” investigate the world around them, “to fanciful and sometimes frightful effect,” said Virginia Treanor, associate curator of the museum. “Collectively, their work addresses modern society’s complex relationship with the environment, ranging from concern for its future to fear of its power.”

Treanor told The Diplomat that the exhibition is unlike any other in town. “The idea of taking a theme — in this case plant and animal life — and looking at how and why women artists portrayed these things over the past 400 years or so, is completely novel and something you won’t see anywhere else in Washington,” she said.

Treanor said it is important to examine this connection because the notion that women are closer to nature is engrained in our society. “The most obvious is the personification of Mother Nature, who can be generous and bountiful or capricious and destructive — a pendulum of emotions similarly ascribed to women,” she explained.

To that end, the works in the show tackle the full spectrum of emotion that nature inspires — from the peaceful serenity of Ysabel LeMay’s flora and fauna in pieces like “Reflection”; to the menacing eeriness of Lara Shipley’s “In the Ozarks There Are Lights (Devil’s Promenade)”; to the environmental degradation portrayed in Jennifer Celio’s black-and-white drawings. 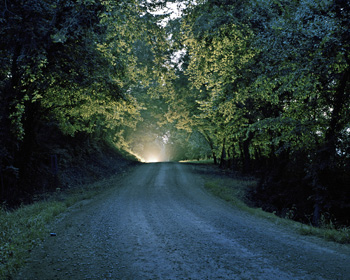 Celio said she was “honored and thrilled” to be included in the exhibition, whose artists were chosen by a nomination process. She said that at least for the time being, it is important to have high-profile exhibits that focus exclusively on female artists.

“I certainly hope that one day, all things being equal, these things will become unnecessary,” she said. “But, given that male artists receive more focus and legitimacy than females from the overall art world system, a show like this allows recognition of quality work being created by artists who happen to be women.”

The exhibit is unique in that it highlights artists from around the world (anywhere that has an outreach committee associated with the museum). Included artists are Dutch, American, British, German, Italian and Australian. “The viewer can compare and contrast thematic content, concepts and techniques between artists from multiple countries and from many regions of the United States,” Celio said. “For me it was interesting to see how the artists from varied areas approached the theme of the natural world in their work.”

A featured artist in “Super Natural,” Sharon Core lives and works in the Hudson Valley in New York State. “I think the NMWA is critical for showcasing women’s art, which is sorely underrepresented in major institutions, galleries and in the press,” she said. “Women have come a long way in their quest for equality, but there is still an unfortunate gender gap in the art world.” 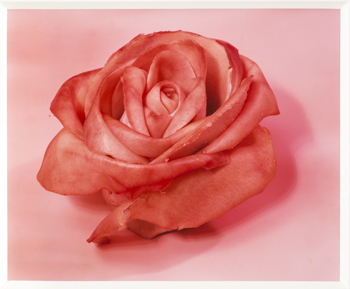 A complementary exhibit, “Super Natural,” features Sharon Core’s “Single Rose which is made from pig ears.”

Core’s photograph in the exhibition, “Single Rose,” is an early work of hers made in 1997 when Core was a graduate student. The piece plays with the divergent concepts of beauty and disgust. “It is an important early seminal work for me in terms of influencing the work I have made since,” she said. “I sculpted this ‘rose’ from pig’s ears purchased from the supermarket.”

Treanor said that for a variety of reasons, nature is a motif that women artists all over the world have examined and continue to explore — on their own terms.

According to Treanor, the feedback on the exhibit has been very positive. Some remarks from the visitor comment book include: “This is one of your most beautiful and surprising exhibitions,” and, “So proud of these strong women and the beauty of their expressions.”

For those who are on the fence about visiting NMWA, Treanor said that going to other museums, you may get the impression that women artists are few and far between, but “we are here to set the record straight.”