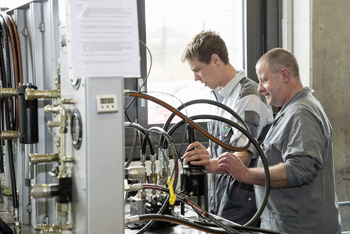 Switzerland has the lowest youth unemployment rate in Europe (3.2 percent), one of the lowest crime rates of any industrialized country and the world’s second-highest life expectancy after Japan.

In addition, its 8 million people enjoy one of the world’s highest nominal per-capita GDPs, alongside Luxembourg, Qatar and Norway. The Swiss cities of Zürich, Geneva and Bern consistently rank among the most livable on Earth, and in 2015 — as it has for the past six years — the World Economic Forum ranked Switzerland first out of 144 countries in its Global Competitiveness Report.

Certainly, the Swiss must be doing something right.

Indeed they are, says the Geneva-based World Economic Forum, which praises the country’s transparent institutions, world-class infrastructure and education systems, flexible labor market, business acumen and, in particular, its capacity for innovation.

Switzerland employs a vocational training system that prepares young students for specific professions. The Alpine nation is home to one of the lowest unemployment rates on the continent yet produces far fewer higher education graduates than many of its European counterparts.

“Switzerland’s top-notch academic institutions, high spending on R&D, and strong cooperation between the academic and business worlds contribute to making it a top innovator,” the group said. “Switzerland boasts the highest number of Patent Cooperation Treaty applications per-capita in the world. Productivity is further enhanced by an excellent education system and a business sector that offers excellent on-the-job-training opportunities.”

So what if the United States could emulate Switzerland’s success?

Intrigued by the possibilities, on July 9 the U.S. Labor Department signed a joint declaration with the Swiss government to collaborate and exchange information on best practices in vocational education and training.

That declaration was the subject of a recent event at the National Press Club that brought together three experts: Martin Dahinden, Switzerland’s ambassador to the United States; Eric M. Seleznow, deputy assistant secretary of employment and training at the Labor Department; and Nancy Hoffman, vice president and senior advisor at Jobs for the Future.

“In Switzerland, students make a career choice as early as eighth grade. I’m not kidding,” Dahinden explained at the June 25 gathering. “At age 15 or 16, our teens begin to plan their future career. Two-thirds of Switzerland’s youth at that age do not opt for college, but for a career in a specific professional field. We call this path apprenticeship.”

Dahinden should know. Besides being the former director-general of the Swiss Agency for Development and Cooperation, his 17-year-old son Robert is currently doing an apprenticeship in metal processing.

“As a father, I am proud, but I also have peace of mind knowing my son is going to hit the ground running when he finishes after four years of on-the-job and at-school training. I know he will find work. He will begin his life with no debt, ready to contribute to the community and to Switzerland’s economy.”

Robert is now in his second year at a small company in Bern, the Swiss capital. Three days a week, he works on the job; the other two days, he attends school, acquiring skills he’ll eventually need to either move on to a higher degree or start his own business.

And even though Robert’s not yet financially independent, the ambassador says “his salary will go up with every year of his apprenticeship, and with the diploma in his pocket, he will soon make enough money to start a life of his own.”

Switzerland is home to one of the lowest unemployment rates on the continent yet, compared to other European countries, produces far fewer higher education graduates. While the university route is traditionally associated with better prospects and pay, it can also leave overqualified candidates competing for scarce jobs while saddled with high debt. One look at the enormous youth unemployment rates in countries like Greece and Spain (roughly 50 percent) illustrates this problem. In contrast, “Germany and Austria are among the European countries with the least number of university-educated youth but they boast a very low youth unemployment rate,” wrote Swissinfo’s Duc-Quang Nguyen.

Like Germany and Austria, which boast strong apprenticeship programs, Switzerland created a vocational training system that prepares students for a wide range of careers to better meet market demands. That includes highly skilled jobs in areas such as information technology, advanced manufacturing and health care, as well as more traditional blue-collar trades and crafts, wrote Hoffman, co-author of the report “Gold Standard: The Swiss Vocational Education and Training System.” The national nonprofit she represents, Jobs for the Future, works to improve educational and job opportunities for low-income Americans.

“It may sound strange to you, but in Switzerland, 15-year-olds sign a contract with their parents, and that’s their ticket to school and to working in a company. Once they have a contract, they have a pre-set program,” Hoffman told the National Press Club gathering, noting that Zurich Insurance Group last month announced it would establish an apprenticeship program in the United States to help develop the next generation of insurance industry professionals.

“At Zurich Insurance Group, students have an electronic portfolio that tells them where they need to be each day,” she said. “Young people are working in insurance, as carpenters, in manufacturing plants — and they actually produce enough productive labor for the company that they pay back plus a little more than the cost of training them.” 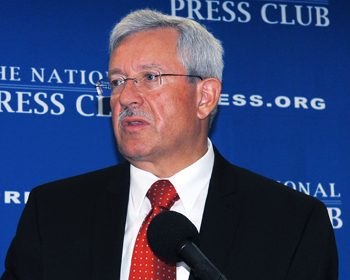 Apprenticeships are now available for roughly 230 distinct occupations. About two-thirds of Swiss high school graduates enroll in such a program, and 90 percent of young Swiss adults hold upper-secondary-level qualifications.

The result: In 2013, nearly 80 percent of Switzerland’s adult population ages 15 to 64 had paid jobs, with an economy based on highly skilled workers — in areas ranging from micro-technology and biotech to pharmaceuticals, banking and insurance.

“After the apprenticeship, you can stay in the company or move to a university, or do an extra year of academics and move into the vocational system,” Hoffman said. “That’s why we think this is the gold standard.”

Hoffman said on average, apprentices receive $800 a month, rising to $1,200 a month in the third year (minimum wage laws do not exist in Switzerland).

About 30 percent of Switzerland’s companies participate in this system, including telecom giant Swisscom and financial services conglomerate Credit Suisse. In addition, food processing giant Bühler AG has begun an apprenticeship program at its Minneapolis subsidiary, while Daetwyler USA is doing likewise at its plant in North Carolina.

“In the U.S., we do too much finger-shaking at employers. But it’s in their best interests to create a talent pipeline that starts at a much younger age,” said Hoffman. “When you talk to CEOs, the first thing they’ll tell you is that this is the best way to grow human capital. You invest in young people and they’ll be loyal. They’ll stay with the company.”

Hoffman said about 5.5 million young Americans are neither working nor training for work, and that 21 percent of them are black. “But we also have many with bachelor’s degree working as baristas, getting paid the wages of someone who does not need that kind of credential.”

That’s why the Swiss model of apprenticeships could work here, she said.

“Apprenticeships can be for three or four years,” Hoffman explained. “During the first year, there’s a modest cost to the company, but young people are actually given real work to do right away. The second year, the three-year apprentice begins to produce a profit for the company, and by the third or fourth year, both pay back the company and they have someone who is very well-trained.”

Ambassador Dahinden conceded that at the beginning of their apprenticeships, Swiss youth don’t make enough money to live on.

“Most of them still live with their parents. In this first year, they are not very interesting economics-wise for their companies,” he said. “But after the apprenticeship is over, they’re not in debt, like after college. They start their professional lives without debt. It’s different year by year, and there are no minimum salary requirements.” 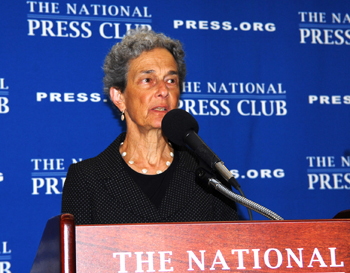 Dahinden added: “It’s not only about acquiring skills. Young people learn to integrate themselves in the adult world, so they start working in a team with people of all ages. Also important is that they not only learn technical skills but how to work with clients, how to deal with procurement of materials — all those elements that are essential if somebody wants to start their own business after the apprenticeship.”

By contrast, said the Labor Department’s Seleznow, the average apprentice in the United States is 27 or 28 years old.

On July 31, 2014, Biden’s office released a 76-page report on ways to strengthen the program; the White House subsequently committed $100 million toward the cause.

“We don’t want to recreate the Swiss system here, but there are many parts of their system that are just plain common sense,” said Seleznow. He pointed out that Switzerland is the seventh-largest foreign investor in the United States and that Swiss companies employ more than half a million Americans.

“We have worked closely with the Swiss Embassy, and we want to take that model of apprenticeship here,” he said, “but we need more companies to get involved.”