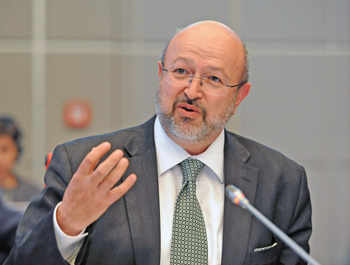 As world leaders anxiously monitor the ongoing political crisis in Ukraine, the Organization for Security and Cooperation in Europe (OSCE) is quietly but effectively laying the groundwork for a possible resolution.

The trans-Atlantic security and rights group, which comprises 57 states in North America, Europe and Asia (including Russia), has been deeply involved in mediating the crisis and monitoring the country’s May 25 election. It is one of the few international bodies trusted by both the West and Russia to play a major role in trying to defuse the tensions that are threatening to tear Ukraine apart.

Lamberto Zannier, secretary-general of the Organization for Security and Cooperation in Europe, speaks at the OSCE Permanent Council in Vienna in April 2014.

The OSCE’s overall mandate includes issues such as arms control, conflict prevention, and the promotion of human rights, freedom of the press and fair elections. It has 550 staff at its headquarters in Vienna and 2,300 field staff. The OSCE originated in Helsinki, Finland, in 1975 and had a budget of 144 million euro last year.

Lamberto Zannier, the OSCE’s secretary-general and a career Italian diplomat, recently sat down with The Washington Diplomat at a Foggy Bottom hotel to discuss the crisis and the group’s increasingly visible mediation role. To say he knows a few things about conflict prevention is an understatement. From 2008 to 2011, he was the U.N. special representative for Kosovo and head of the U.N. mission there. From 2002 to 2006, he was director of the OSCE’s Conflict Prevention Centre, and in the 1990s, he was head of disarmament, arms control and cooperative security at NATO.

“We offer a very unique approach to security — we call it a comprehensive approach,” Zannier said. “We do the political and military side, but we also work on economic security, human rights and strengthening democratic institutions, all of them being components of a broader approach to security.

“We are inclusive,” Zannier added. “Our approach is based on dialogue and engagement — soft security. And while we are a security organization, we are not a defense organization. We are very different than NATO.” 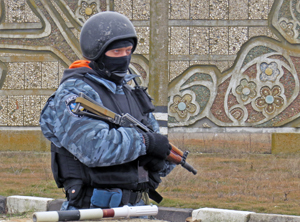 An unidentified soldier stands watch at a checkpoint in Crimea, which was annexed by Russia following a referendum that played on the pro-Russian sentiment in eastern and southern Ukraine.

That’s a good thing, because NATO is lightening rod for controversy in Russia, whose president, Vladimir Putin, accuses the military bloc of encircling his country and steadily chipping away at its influence. That longstanding resentment boiled over when Ukrainian President Viktor Yanukovych was ousted from power in February after he spurned a deal to establish closer relations with the European Union in favor of $15 billion in aid from Russia, sparking massive protests in Kiev. Many experts say the thought of losing Ukraine, a key buffer state with deep economic and historical ties to Russia, was a red line for Putin, who has seen the once vast Soviet empire shrink dramatically since the fall of communism.

Russia quickly responded to the political jockeying in Kiev, annexing the Black Sea peninsula of Crimea via a referendum that played on the pro-Russian sentiment in eastern and southern Ukraine. Since then, pro-Russian separatists in the east have tried to declare independence from Kiev, although so far Moscow has not moved to absorb those regions — which would surely trigger full-blown civil war.

Russia has also tentatively welcomed the May 25 presidential election that ushered Petro Poroshenko into office. A billionaire confection magnate, Poroshenko handily beat out his closest competitor, former Prime Minister Yulia Tymoshenko. The OSCE and other international observers generally deemed the election free and fair, although the security situation in the east kept many people there from voting.

One of the few neutral actors in this imbroglio has been the OSCE, whose officials have engaged in high-level diplomacy with all sides while aiming to address concerns about fundamental freedoms and human rights, as well as election monitoring, fact-finding and military visits.

Some of those visits, however, haven’t exactly received a warm welcome. In late April, separatists in eastern Ukraine detained a group of OSCE military monitors for more than a week before the EU negotiated their release. More recently, several other small groups of OSCE election monitors have been reported held or missing. Zannier says the dangerous conditions won’t keep the OSCE from its mission to resolve the conflict, which represents the worst flare-up of hostilities between the West and Russia since the Cold War.

“We seek an open and inclusive national dialogue in Ukraine,” he told us. “Dialogue is probably the best way for us to try to have the Ukrainians to engage in an agenda that will be defined by them and not imposed by the international community.

“We’re addressing the idea of constitutional reform, local government, fighting against corruption and other reforms, including justice and rule of law,” he added. “We hope through this to create a political space to bring the political discourse back from the streets and back to the parliament and the political environment where it belongs.”

As part of that effort, the OSCE in early May proposed a so-called “road map” to peace and stability that Russia and Ukraine could follow. The proposal focuses on four elements: nonviolence, disarmament, dialogue and elections. 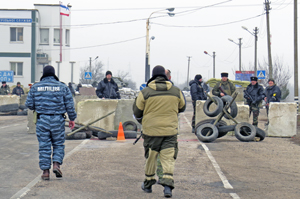 Armed forces man a checkpoint at the Armyansk crossing into Crimea.

“The road map recognizes we need to de-escalate and bring the political process back to where it belongs so we don’t see weapons around and so we can create the conditions for disarmament,” Zannier explained. “For all this we need the process of dialogue to start. We need to have proper investigation and where there have been crimes committed, the perpetrators must be brought to justice. It is basically a plan of de-escalation with a number of steps. One of the things we are doing is discussing with the Ukrainians now the sequencing of these steps. One of the other things we are dealing with is the fact that some of the counter-terror operations started by the Ukrainian government are still ongoing.”

Dozens, in fact, have died in clashes between pro-government troops and separatist forces that have only intensified since Poroshenko came to power. The newly elected president has vowed to crush the nascent rebellion in the east, where separatists had taken over a strategic airport and have occupied other key buildings for weeks.

“When there is still a use of force it is difficult to begin a dialogue, and some of these militias that have appeared in the east of the country are in fact a barrier to dialogue,” Zannier said. “I think we need to isolate them and encourage people not to get caught in this potential spiral of violence. That’s where we need to engage and to appeal.”

The interim government in Kiev has also floated its own roadmap, agreeing to discuss divisive issues such as the decentralization of power and protection of the Russian language with rebels who lay down their arms. Arseniy Yatsenyuk, Ukraine’s parliament-appointed prime minister, told reporters in Brussels on May 13 that while Ukraine appreciated the OSCE’s proposals, Kiev would provide its own plan.

Zannier said the issue of who gets credit for coming up with a settlement isn’t important, so long as stability returns.

“What it means is they want to have strong ownership of this process. They welcome the efforts of the international community to assist them and point to some areas where we need to move, but on the other hand the Ukrainians want to make sure they are in the driver’s seat of this process,” he said. “They agree with most of what is there, but they are saying this has to be driven by them and I think that’s good. They are the ones who have to solve the problem.”

That can’t happen without the good-faith efforts of Russia, Zannier also pointed out.

“We want more engagement. I expected Russia to play a stronger role,” Zannier said. “I also see the role of media to be potentially destabilizing. It’s very polarized. I hear different stories if I watch Western or Russian media, which reaches most of the population of the east…. The interpretation is very different and that affects the population.” 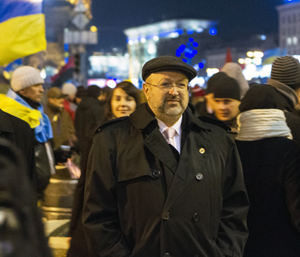 Organization for Security and Cooperation in Europe Secretary-General Lamberto Zannier visits Kiev in December 2013 during the Euromaiden protests.

Zannier said it remains to be seen how the May 25 presidential election will play out across Ukraine and in Russia, whose president seems to have toned down his earlier confrontational rhetoric. Putin has called for dialogue among the warring factions and ordered the withdrawal of roughly 40,000 Russian troops deployed near the Ukrainian border.

The apparent softening of Putin’s position is seen as a hopeful sign that elections might begin to heal the fractured country. Some observers have speculated that Putin’s turnaround has a lot to do with the winner of those elections: Poroshenko, who has strong business links to Russia and has pledged to repair ties with the Kremlin

But Putin may have already let the nationalistic genie out of the bottle, as pro-Russian insurgents refuse to recognize the results of the May 25 ballot and wage pitched battles against Ukrainian armed forces.

“Those who are saying those things are these self-appointed leaders who represent themselves, but of course they influence the communities,” Zannier said, noting that there has been an atmosphere of intimidation in the east.


Russia could help tamp down that anxiety, he suggested.

“That’s where Russia can help,” Zannier said. “It is good to have statements from Moscow saying these elections are important and they should be supported.”

Asked about Russia’s previous efforts to dilute OSCE meddling in its own elections, Zannier, ever the diplomat, demurred.

“Election monitoring is a difficult job smile,” he said with a smile.

Zannier said Russia appears to be acting in good faith, but he could not rule out Western fears of further Russian aggression, especially if further bloodshed breaks out or Ukraine’s new president tries to take the country further into the EU’s orbit.

“I can’t speculate on what Moscow’s plans are,” Zannier said. “After Crimea there are obviously concerns. But at this point, these are speculations. I don’t think it is in Russia’s interest to have an open crisis or even a civil war right at its doorstep; it might create instability even inside Russia.

“I think we need to build on this and keep insisting that Russia is engaged and cooperate in this de-escalation process before this situation gets out of control for everybody,” Zannier added. “If this spreads and gets out of control even Moscow at some point could have trouble influencing processes, and this could turn into a nightmare for everybody. That should be a good basis for everybody, including Moscow, to try to address this particular juncture. It’s a key moment.”