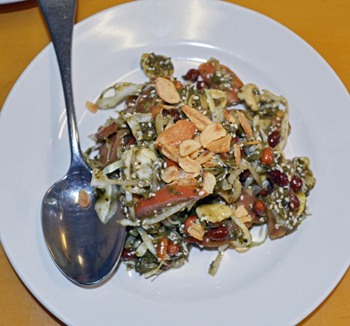 If you want decent ethnic food in Washington, D.C., you don’t have to look far.

Restaurants within the relatively small borders of the District of Columbia span the globe. But if you want truly authentic, even exotic food at a fraction of the price you’ll pay in the city — and if ambience isn’t a high priority — you must visit the sprawling Maryland and Virginia suburbs.

I stumbled across Cowen’s guide last February as I searched for a bright meal to offset the dreary doldrums of an endless Washington winter. I’ve returned to his free online resource many times in the months since, almost always to my satisfaction. So, in tribute to the adventurous foodie/economist, during the months of October and November, The Diplomat will devote its own food pages to exploring a half-dozen of his most intriguing suggestions. Our first three robust dinners each came in at under $50 for two before tip — a figure that’s hard to duplicate in the District.

For our inaugural meal in the series we went to Burma. More specifically, we dined at Myanmar, a downtrodden-looking restaurant in a hard-to-find, dilapidated strip mall near the Beltway in Falls Church, Va. Myanmar definitely won’t win any style points. The front of the place is dim and tacky, with a marquee that doesn’t light up and supplies piled on the tables. A cashier chatted noisily on her phone. The back half of the restaurant was garishly bright and mostly empty, but that’s likely because it was late on a holiday weekend. An online search reveals that the quirky Myanmar’s version of Burmese food has plenty of devotees. Once the food began to arrive we could see why.

Crispy green tea salad is a house specialty at Myanmar Restaurant, and in Burmese cuisine generally, for good reason.

Burmese cuisine draws on elements of Chinese, Indian and Thai cooking but with fewer fiery flavors and more subtlety. We started with lentil fritters prepared with grounded yellow split peas and onions. While not piping hot, the fritters had an appealing crunchy texture and a pleasant if slightly mundane flavor that was enlivened by the sweet orange dipping sauce. We were off to a fair — but not exactly awe-inspiring — start.

Moving on to another Burmese staple, we tried the mohingar, a fish noodle soup. Thin rice noodles fill a savory fish broth flavored with lemongrass, cilantro, lime and a bit of chili pepper. This is a hearty and bone-warming option that will surely grow in popularity in the colder months ahead. If you’re not too hungry, the mohingar could be a satisfying meal all by itself.

For our final choice, we ordered the shrimp with string beans bathed in a coconut milk broth. Happily, we found that we had saved the best for last. Plump, perfectly cooked jumbo shrimp gives a nice contrast to this dish’s steaming, rich and creamy coconut milk broth, while subtle spices offset the overall sweetness. This deceptively simple and delicious entrée, paired with fluffy white rice, would have alone validated our decision to visit Myanmar.

One word about the service: Some online commentators have complained mightily about a slow and indifferent wait staff at Myanmar. While our server seemed a bit distracted, he was on point when it mattered. Other than the drab ambience — and possibly iffy service — Myanmar is a winner for dinner.

Next, we traveled south of the border for good Mexican food, something that this writer — who hails from Texas and New Mexico — has found in seriously short supply over 15 years in the metropolitan D.C. area. It’s gotten better with the additions of District Taco and a little gem called Tortilla Café near Eastern Market on Capitol Hill, but overall the Mexican food around here is blah at best.

Cowen concurs, based on the comments in his guide. But he did offer some props to one place in particular: a Mexican joint just across the D.C. line in Bladensburg, Md., called El Tapatio. Naturally, we had to go. 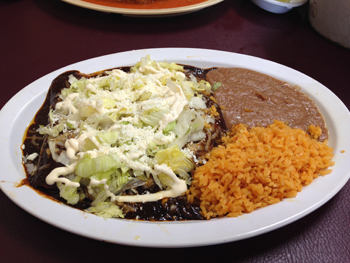 Like Myanmar, this restaurant makes a bad first impression. Lodged in a dirty strip mall, wedged between a nail salon and a tax preparer’s office, El Tapatio is actually a restaurant and sports bar, and it becomes a dance club on weekends. Frankly, the place is grubby. But we aren’t on this suburban adventure for the glamorous décor or spotless floors — it’s all about the food.

Chips and salsa are often a harbinger of things to come in Mexican restaurants, and El Tapatio passed the test. Dense, crunchy tortilla chips — fried on site and lightly salted — proved more than adequate for scooping up a pureed mixture of tomatoes, onions, cilantro and spicy fresh jalapenos.

I had hoped to try the birria de chivo, a savory goat stew, but sadly the kitchen was out. So we scanned the menu for some other hard-to-get-right Mexican offerings. After staring long and hard at the extensive list, we settled on chile rellenos and chicken mole enchiladas. We also tried one each of the carnitas and chicken tacos.

The two rellenos, hot from the oven, were massive — so big, in fact, that the accompanying refried beans and rice came on a separate plate. The plump green poblano peppers, dipped in an egg batter and lightly fried, were dressed up with a few small charred onion slices. The poblano peppers were tender to the fork and full of a subtle but flavorful asadero cheese. What set this relleno apart — other than its sheer size — was the light and delicately battered shell, unlike the hard fried casings that mar many relleno dishes.

The mole enchiladas were also tasty, with a smoky-sweet flavor that wasn’t overwhelmed by a cloying chocolate taste, as other versions of this dish tend to be. The mole also had a touch of spicy heat. Our only quibble here was the overly generous mound of lettuce and crema fresca that topped the enchiladas. Thankfully, this bit of overkill was easily solved with the swipe of a fork.

The tacos, filled generously with grilled meat and served on corn tortillas, were tasty enough but nothing to brag about. However, on another note, the refried beans at El Tapatio are flat-out great. They have perfect consistency — smooth with a few small chunks, served steaming hot and blended with flavorful charred onions. Service at El Tapatio was friendly and efficient. Overall, our experience here was muy bueno.

To round out our first month of suggestions from Cowen’s list we tried Fettoosh, a Moroccan and Lebanese restaurant in Arlington, Va. Unlike the first two places we visited, Fettoosh presents itself attractively. Tucked into yet another small strip mall just south of the Ballston shopping center, Fettoosh is bright, clean and uncluttered with modern, if simple, design flourishes. 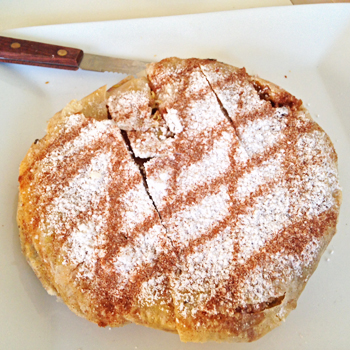 At Fettoosh, chicken is marinated with almonds, parsley and onions, wrapped in delicate puff pastry and sprinkled with sugar and cinnamon.

At Cowen’s suggestion, we mostly stuck to the more interesting Moroccan side of the menu and accepted a few helpful recommendations from our server, who also happened to be the Moroccan-born owner of the establishment. A bowl of harira — a rice lentil soup with chickpeas and a tomato base — was intensely flavorful and warming, and a great start.

Chicken bastilla was unlike anything we’d ever tasted and contained a mixture of flavors that were sweet, savory and delicious. Chicken marinated with almonds, parsley and onions is wrapped in delicate pastry puff sprinkled with sugar and cinnamon. The bastilla comes in three sizes but the small rendition — paired with a couple of other menu offerings — was more than enough. In fact, we brought some home.

Our one pick from the Lebanese side of the menu was the namesake fettoosh: pita bread added to fresh parsley, cucumber, tomatoes and onions with lemon juice and olive oil. This wasn’t quite as lively as we’d anticipated. Subpar tomatoes — good ones can be hard to find — may have been the culprit.

Since the fettoosh fell flat, we moved on to the fish tagine, a Moroccan stew featuring a tender, light piece of sole simmered in a spiced tomato broth with potatoes, roasted tomatoes, bell peppers and olives. The complex yet delicate flavors of this dish were dazzling. Filling without being overburdening, this alone would make for a perfect light dinner.

At a fellow diner’s suggestion, we shared a piece of baklava, billed as “the most famous Middle Eastern dessert.” We’re glad we did. The baklava — prepared in-house and attractively plated with drizzles of honey and chocolate — was not overly sweet and had a palate-pleasing firmness that lent it heft and texture.

The baklava was a fitting end to a delicious meal, and a fine way to end our Tyler Cowen-inspired foray into the exotic culinary world of the Washington suburbs.