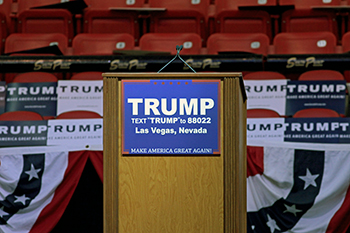 Career diplomats make it their business to stay out of politics, but the prospect of a Donald Trump presidency has galvanized an unprecedented backlash among otherwise neutral, bipartisan ambassadors. As Syria’s destruction continues unabated, North Korea rattles its nuclear sabers and Washington-Moscow tensions reach their highest level since the end of the Cold War, the last thing the United States needs is an “entirely unqualified” reality TV star manning the White House.

That’s the sentiment of 220 retired U.S. ambassadors and other diplomats who have gone public for the first time in their professional lives — by openly endorsing Hillary Clinton for president. What makes their letter particularly damning is that 125 of these 220 were appointed to their posts by Republican presidents.

The letter, simply titled “Career Ambassadors and State Department Officials for Clinton-Kaine,” was first published Sept. 21 and signed by 75 people.

A podium stands ready for Donald Trump at a campaign rally for the Republican presidential candidate at South Point Arena in Las Vegas.

Since then, a slew of leading Republicans have bailed on Trump, including former Secretary of State Condoleezza Rice, who on Oct. 8 wrote on her Facebook page that, “Donald Trump should not be President. He should withdraw. As a Republican, I hope to support someone who has the dignity and stature to run for the highest office in the greatest democracy on earth.”

According to the open letter, “Very simply, this election is different from any election we can recall. One of the candidates — Donald J. Trump — is entirely unqualified to serve as President and Commander-in-Chief. He is ignorant of the complex nature of the challenges facing our country, from Russia to China to ISIS [Islamic State] to nuclear proliferation to refugees to drugs, but he has expressed no interest in being educated.”

The letter added that Trump “has expressed the most ignorant stereotypes of [foreign] countries; has inflamed their people; and has insulted our allies and comforted our enemies.”

James Keith, who served as U.S. ambassador to Malaysia from 2007 to 2010, was one of the organizers of this effort, along with Nelson Cunningham, president and co-founder of McLarty Associates, a Washington-based global consulting firm.

“Virtually everyone who signed was motivated to endorse anyone in a presidential race for the first time by the sense that we had to do everything possible to prevent Donald Trump from winning,” Keith told The Diplomat by phone from Taiwan. “During our careers, none of us would ever have come out using our title as ambassador, since one cannot use one’s office as a means of promoting one candidate or another.”

Keith, who directed China affairs at the National Security Council for President Bill Clinton and was deputy assistant secretary for China under George W. Bush, said that while he doesn’t expect the letter to change the minds of die-hard Trump fans, it may sway undecided voters who care about foreign policy.

“I spent a huge part of my 30-year career on nuclear nonproliferation issues,” he said. “To throw away the work the world has done would be a huge mistake. To suggest that South Korea and Japan should become nuclear states in order to carry their own weight shows not only ignorance of facts on the ground but a complete lack of awareness of the serious effects these statements have.”

Carey Cavanaugh, a career Foreign Service officer who helped establish the U.S. Embassy in Georgia and is a specialist in Caucasus and Eastern European issues, said that until now, he has never written or signed such a letter.

“I don’t sign petitions. In fact, it’s in the DNA of Foreign Service officers that you’re hired with the assumption you won’t be political that way,” said Cavanaugh, now a professor of diplomacy and conflict resolution at the University of Kentucky’s Patterson School of Diplomacy and International Commerce. “Yet when I was approached about the letter and given a draft of it and asked if I would be willing to sign, I decided I would the more I read it.”

“The list just goes on and on,” said Cavanaugh, noting that once former diplomats saw who else had signed, they became emboldened to add their own signatures. “All of us are career diplomats — no political appointees. There may be a few who were hoping to work in the next administration, but people are very much speaking their conscience.”

Cavanaugh said two things are driving the petition: Trump’s “total lack of understanding of the complexity of foreign policy” — whether it’s the Middle East, China, Russia or nuclear proliferation — and his condescending, know-it-all attitude.

“You can run for president and be a good president without understanding all the policy. But Trump is unwilling to pay attention to the advice of others. You can’t possibly know more about ISIS than all the generals who have spent years studying the Middle East,” he said.

Another example, said Cavanaugh, surfaced during the presidential debates.

“Trump brought up the issue of our aging B-52s,” he said. “But he seemed totally unaware that the U.S. has just embarked on a $1 trillion nuclear weapons modernization program. That was part of the arrangement the Obama administration had to agree on with the Republican-controlled Senate to get the new START [Arms Reduction] Treaty with Russia.”

Trump’s camp dismissed the letter as a useless stunt by “a bunch of career overseas bureaucrats” under whom “the world has become a more dangerous place on their watch.”

Since the letter’s release, Trump’s campaign has been rocked by allegations that the candidate forcibly groped several women and bragged about being able to sexually assault women because he is famous. The fallout, however, hasn’t tempered his vitriol. As if preparing for his imminent defeat, the real estate billionaire has issued dire warnings that the election is likely to be rigged and urged his supporters to monitor polling places for fraud. That has led to concerns that if he loses, Trump would foment an uprising that could threaten the bedrock principle of U.S. democracy — the peaceful transfer of power from one elected president to the other.

Conversely, if he is elected, the Republican firebrand has said he would jail his opponent and continue his scorched-earth tactics. So if Trump wins the presidency, would he turn the United States into a dictatorship?

The idea isn’t that far-fetched, says Laura Kennedy, who from 2001 to 2003 was U.S. ambassador to one of the world’s most oppressive regimes: Turkmenistan.

“The comments he has made expressing admiration for dictators around the world — including North Korea and Russia’s [Vladimir] Putin — are just bizarre,” said Kennedy, who was appointed to Turkmenistan by George W. Bush and served at U.S. embassies in Moscow, Ankara, Yerevan and Ashgabat. “The horror people have felt at the prospect of Trump as president is very real and visceral. It’s not just his ignorance; it’s recklessness and a complete lack of understanding of the value of our alliances around the world. It casts us back into the Middle Ages.”

She added: “How the heck do you go into Country X and stress the importance of having a free and fair election when the candidate of the party of [Abraham] Lincoln is promising to jail his opponent if elected?”

Kennedy, an expert on nuclear nonproliferation issues (from 2010 to 2013, she was ambassador to the multilateral disarmament talks in Geneva), is particularly disturbed with Trump’s comments regarding nuclear weapons and the supposed “irrelevance” of NATO.

“When I first heard those comments, I was so startled. I thought this was being extraordinarily reckless. But his basic lack of information is mind-boggling,” she lamented. “In my opinion, he has already done damage to our standing in the world.”

Kennedy recalled her recent participation at a conference in Montenegro, a former Yugoslav republic that has just been admitted as the 29th member of NATO.

“Here they are on the verge of joining NATO and what are they hearing? Donald Trump saying that the alliance is obsolete, and treating it as a business proposition. And there are other nations, particularly in Eastern Europe, that must be horrified by this.”

Keith, the petition’s co-organizer, said he’s encouraged by the fact that Trump’s standing in pre-election polls has fallen significantly since the release of a 2005 videotape alluding to sexually aggressive and obscene behavior — but now, he said, is not the time to let up the pressure.

“Trump just tunes out a lot of what they hear, but people do take seriously the notion of the president as commander-in-chief,” he told us. “We may not be military, but in our own way we work on the front lines around the world, whether in diplomacy or nuclear issues. I like to think that our specific focus on his fitness as commander-in-chief might have some resonance.”