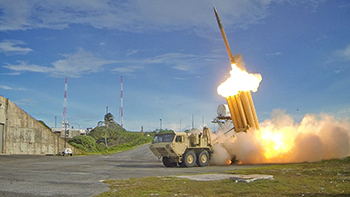 Faced with North Korea’s ongoing nuclear and ballistic missile tests, the deployment of a U.S. missile defense system to protect South Korea has been set on a fast track despite vocal Chinese opposition and threats of economic retaliation.

The United States will deploy the Terminal High Altitude Area Defense (THAAD) missile defense system in South Korea on “an accelerated basis” and “as soon as possible,” said Daniel Russel, assistant secretary of state for East Asian and Pacific affairs, at a Sept. 27 congressional hearing. The North Korean regime conducted its fifth nuclear test — its most powerful to date — on Sept. 7 ahead of the 68th anniversary of the country’s founding, just six months after the U.N. Security Council passed yet another round of strict international sanctions that still haven’t deterred North Korea from aggressively expanding its nuclear program.

The U.S. has struggled to curb Pyongyang’s nuclear ambitions over the last two decades. President Obama relied on a policy of “strategic patience,” pressuring the North Korean regime through sanctions and the interdiction of arms shipments while trying to persuade China to rein in its reclusive neighbor. Although China’s relations with Kim Jong-un, the North’s unpredictable young dictator, have been frosty, Beijing fears that a collapse of the regime would send a flood of poor refugees across its borders while positioning a major U.S. ally on its doorstep if the two Koreas reunite.

With the apparent failure of diplomatic negotiations and sanctions, some experts say the best option to prevent North Korea from threatening the region — and beyond, if it engineers a long-range nuclear warhead capable of reaching the continental U.S. — is to bolster South Korea’s missile defense system.

South Korea and the U.S. announced in July that THAAD would be installed to block a possible missile strike from North Korea, even though China (along with Russia) opposes the system and says it would spark an arms race in the region. Promotional events in China by some popular K-pop bands and South Korean TV stars were abruptly canceled after the announcement. China also canceled the license of a visa agency serving South Koreans, and Chinese officials and state-run media condemned THAAD.

THAAD would be a significant expansion of South Korean defenses beyond the existing short-range Patriot missile batteries that aren’t designed to hit high-altitude targets. A U.S. Missile Defense Agency video released last year showed truck-mounted THAAD rockets successfully shooting down two ballistic missiles in mid-flight. While THAAD is a defensive system, China sees a more dire threat from the United States, claiming THAAD’s powerful radar could be reengineered to spy on Chinese military bases or shoot down missiles from China, thus upending the balance of power in the region.

“China has been extremely vocal about their opposition to THAAD,” said Charles Armstrong, a Korean studies professor at Columbia University and former Wilson Center fellow. “Clearly, THAAD has touched a nerve. The Chinese insist that it could reach into Chinese territorial air space while the U.S. insists that it will not.”

However, the threat of economic retaliation may be limited and not hurt long-term ties once China realizes the system will be deployed anyway, Armstrong told The Diplomat. U.S. officials have been resolute that THAAD will be deployed, which also would protect U.S. military installations in South Korea (the country is home to nearly 30,000 U.S. troops). Moreover, South Korea is China’s third-largest trading partner so wide-scale economic retaliation isn’t in either country’s best interests.

The diplomatic row may soon be overshadowed by U.N. negotiations over more stringent sanctions against North Korea for its latest underground nuclear test and a plethora of ballistic missile tests.

National polls have shown a majority of South Koreans support THAAD, and there hasn’t been significant political opposition. The most vocal protests have occurred in southeastern Seongju county where THAAD will be installed, prompted by environmental concerns and fears that THAAD sites will be the first targets in a North Korean missile strike. Approximately 900 people shaved their heads to protest THAAD in August. A White House petition seeking to rescind the THAAD deployment has been signed by more than 107,000 people. (In 2013, the U.S. installed THAAD batteries in Guam to protect the Pacific region and numerous military installations on that tiny but strategic island.)

The Seongju protests aside, the most vociferous opposition comes from China. Yet Beijing is in a bind because U.S. officials argue that THAAD wouldn’t be needed if China did more to rein in North Korea and step up its enforcement of international sanctions, said Scott Snyder, senior fellow for Korea studies at the Council on Foreign Relations. North Korea receives 90 percent of its food and fuel imports from China, he noted.

“China is the lifeline for North Korea to the outside world,” Snyder told The Diplomat. “China has leverage economically over North Korea, but if they use that leverage, they are concerned about collateral damage to Chinese interests.” 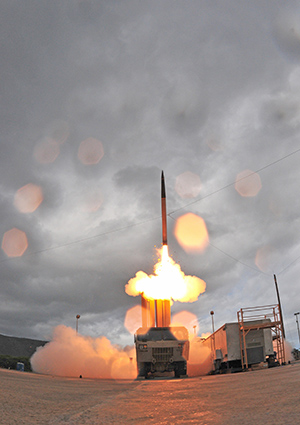 In the wake of repeated North Korean nuclear and ballistic missile tests, the U.S. has said it will fast- track the deployment of its Terminal High Altitude Area Defense (THAAD) missile defense system in South Korea, prompting worries in China that the system will alter the balance of power in the region.

China, North Korea’s largest trading partner, is in the most powerful position to enforce those sanctions, but it fears the North Korean regime could become even more unstable if sanctions bite too deep, Snyder said. Even though sanctions are already tight, the U.N. Security Council could still crack down on North Korean coal exports, banking avenues and wage earnings from the employment of North Korean workers overseas, efforts that are already being pursued by the U.S. and some allies.

Yet even the U.S. has been hesitant to pursue more aggressive sanctions (similar to the ones slapped on Iran) by targeting banking transactions, trade and shipping in and out of North Korea. Officials fear such a move might ignite a full-blown confrontation and cause a deep rift with China because such measures would inevitably punish Chinese banks and companies.

Experts say focusing on the Chinese middlemen who help the North procure materials for its weapons programs should be key to the administration’s sanctions strategy. President Obama has taken tentative steps to crack down on Chinese firms helping to prop up Kim Jong-un’s brutal regime.

In late September, the U.S. sanctioned Chinese engineering firm Dandong Hongxiang Industrial Development Co., prohibiting American companies and individuals from working with the industrial machinery wholesaler. The Justice Department also filed criminal charges against the company owner and three executives, alleging the company helped North Korea evade sanctions by working with a North Korean bank to launder money through shell companies in offshore tax havens. The Justice Department filed a separate civil suit in an effort to seize funds from 25 Chinese bank accounts allegedly used by Dandong Hongxiang and its shell companies, some of which were exposed in the Panama Papers investigation.

Dandong Hongxiang has imported more than $360 million in goods from North Korea since 2011, representing 99 percent of the company’s total imports, according to a recent investigation by the Asan Institute for Policy Studies and the nonprofit C4ADS. Dandong Hongxiang also sold dual-use products to North Korea with potential nuclear applications, including aluminum oxide and pure aluminum ingots, the report stated.

China has supported the investigation, but as Foreign Policy’s Dan de Luce writes, “It’s unclear if China’s criminal inquiry against Dandong Hongxiang represents a more aggressive tack by Beijing against companies flouting U.N. sanctions, or is merely an isolated event. But experts say China has not changed its fundamental calculus on Pyongyang — that stability on the Korean peninsula must be preserved at all costs.”

North Korea may attempt to exploit the battle over THAAD as a distraction from international sanctions. “China is drawing closer to North Korea on this issue, and it has already created a rift between China and the U.S. on how to respond to North Korea,” Armstrong said.

Snyder noted that against the backdrop of Sino-U.S. tensions over territorial disputes in the South China Sea and the controversy over THAAD, Pyongyang may hope “that the United States and China will never unite to take collective action to remove the North Korean regime.”

For its part, China has been urging all the players to return to the negotiating table. While some in Washington are reluctant to reward the North’s provocations with a return to diplomatic talks, Secretary of State John Kerry has said that the U.S. is ready to negotiate with Kim Jong-un, but only if he is prepared to give up his weapons arsenal.

That prospect is highly unlikely as the North makes steady advances in the development of an increasingly sophisticated nuclear program. Like his grandfather and father, Kim has said that nuclear weapons form the bedrock of his country’s security — a symbol of strength and deterrence.

But North Korea has its own conflicting impulses. Just a few days after its fifth nuclear test, North Korea made a rare public appeal for international humanitarian aid to help victims of the devastating Typhoon Lionrock. Flooding in the northeast part of the country killed more than 130 people, leveled towns and displaced more than 100,000 residents.

North Korea has a history of blaming its economic woes on natural disasters, and South Korea has refused to offer aid for typhoon victims because of North Korea’s nuclear and ballistic missile tests, Armstrong said. The Red Cross and the U.N. World Food Program have provided emergency food rations, but fundraising efforts haven’t gained much traction because North Korea is an international pariah.

The country is susceptible to natural disasters in part because of its rudimentary infrastructure, rampant poverty and global isolation. But the Kim family dynasty has shown little regard for the welfare of its 2.5 million people, who have been subjected to decades of mass starvation and torture.

If the regime has calculated that nukes are necessary for its survival, America’s options may be limited, Snyder wrote in CFR’s “Asia Unbound” blog. “[I]f nuclear weapons development has truly become a central tool by which the Kim family justifies the perpetuation of its rule domestically, denuclearization is possible only as a product of regime change; the only alternative to regime change is acquiescence to North Korea as a nuclear weapons state. Such is the strategic choice that North Korea’s current course poses to the United States and its allies,” he warned.

U.S. officials hope that THAAD, which could be operational by the end of 2017, might be a middle ground between those two doomsday scenarios.

Despite the lingering debate over the missile-defense system, U.S. officials have said its deployment is off the table in any discussions of possible new U.N. sanctions against North Korea. Still, the diplomatic controversy and its possible future ramifications are circling in the background, Armstrong said.

“It’s mostly an argument about the real intention of THAAD and the effect of that on North Korea’s behavior,” he said.