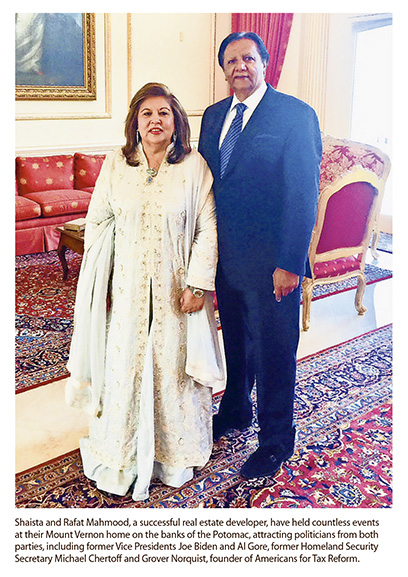 The pomp and circumstance of college graduations have faded for most who walked the stage; by now the focus is on jobs and building a future.

But for one recipient of an honorary doctoral degree in business from Catholic University, the memory of graduation day remains vivid. Rafat Mahmood, a former Pakistani ambassador-at-large, was one of four honorees on May 12 who was recognized for his success as a businessman and for his interfaith leadership.

“A great honor,” he said in a recent interview, “for the Catholic University of America to give a Muslim an honorary doctorate!”

Most who get honorary doctorates are recognized for academic achievement or success in politics; Calvin Coolidge, Franklin D. Roosevelt and Lyndon B. Johnson all received honorary degrees from Catholic University. Rafat Mahmood (everyone calls him “Ray”) stands out as an exception — a man born in Pakistan, who came with his wife Shaista to put down roots in the United States in the 1970s. They arrived with few belongings and little money — very little. Whatever they lacked, however, they made up for with a strong desire to make a new life in the United States. And make a new life they did.

Today, the Mahmoods are among an elite group of well-connected, self-made powerbrokers in Washington. While he doesn’t hold any official political position, Ray, a successful real estate developer, has been a longtime fundraiser for Democratic candidates (they personally know the Clintons), although they’ve also made it a point to reach across the political aisle. In addition, the couple often works to bridge the perpetual schisms in U.S.-Pakistani relations, while also bringing different faiths together. Their home in Virginia — the largest in the tony neighborhood of Mount Vernon — has been the site of countless fundraisers and receptions featuring a parade of Cabinet officials, members of Congress, Supreme Court justices and other Washington luminaries.

The story of the Mahmoods is a familiar one: newly arrived immigrants looking for opportunity; scrambling like so many before them to get a foothold; eager to realize the American dream. Ray had known Shaista and expressed an interest in marrying her, so their two fathers — longtime friends — arranged the couple’s engagement. Three years of courtship followed while Ray looked for a jumping-off spot. Ray’s father — a Pakistani diplomat who established the country’s first foreign office after the 1947 partition of India and Pakistan — had hoped his son would join Pakistan’s army or the diplomatic corps, or get a job with the World Bank. Instead, his son started from scratch in the U.S., working as a cashier and other jobs during the day while taking graduate school classes at night.

Lured by the prospect of getting a green card as a business owner, Ray seized an opportunity in a rundown neighborhood in Alexandria, Va., and bought a gas station.

It was the late 1970s, a time when Western economies were reeling from an oil embargo and cars were lined up at gas pumps around the block. The timing was right, and so was the price — $5,000. Ray and Shaista made it work. The gas station was the first in a series of investments in the years that followed, and they wound up owning the whole block in what became Alexandria’s up-and-coming neighborhood of Del Ray. Real estate classes, American citizenship, the birth of four children and the purchase of more land and more buildings all laid the groundwork for success.

By the time Ray was 30, he and Shaista had made $1 million. The Mahmoods had been transformed from impoverished immigrants to upper middle-class American citizens, known and respected members of the Alexandria community. Recalling those days decades later, they remembered their sense of wonder that they were well on their way toward “living the American dream.” It didn’t end there. 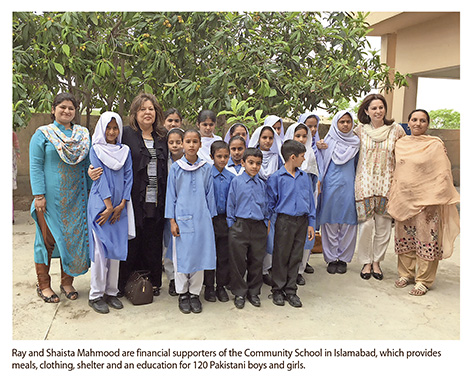 Today Ray and Shaista live in Mount Vernon on the banks of the Potomac, in a gated home they built on land that used to belong to George Washington. Ray says the site is on one of five farms that made up the holdings of the first American president. It was sold by Washington’s heirs in the mid-19th century to an immigrant family of Russian fishermen whose heirs, in turn, sold it to the Mahmoods about 20 years ago. By that time, Ray and Shaista had become wealthier than they ever expected, largely on the strength of sound investments made during years of steady economic growth and a lot of hard work.

In the 20-plus years of living on the shores of the Potomac, the Mahmoods have hosted more parties and dinners than they can count. Many friendships have been cultivated over the years — from Jim Moran, the longtime Democratic congressman and early mentor, to George Allen, the former Republican governor who lives just down the shoreline. Guests at their home have included former Vice Presidents Joe Biden and Al Gore, former Homeland Security Secretary Michael Chertoff and Grover Norquist, founder of Americans for Tax Reform. Dozens of rich and famous guests have been seated at dinner next to scores of the not-so-rich and not-so-famous. Ray and Shaista say that anyone is welcome in their home regardless of wealth, political views, station in life or religious beliefs.

They have become just as well known in the region for their support of interfaith activities, and once a year they put together a large guest list for an iftar dinner — a celebration, they say, of all the Abrahamic faiths. It’s a tradition that started after the 9/11 terrorist attacks, just a couple of years after they had moved into their new house. The tradition has continued and caught on, as high-level guests have subsequently hosted interfaith iftars in their own corporate, political and social circles.

The importance of recognizing people of all religious faiths is one of the principles that brought Ray to Catholic University, where his youngest daughter studied. He’s a humble man, but he’s quietly proud of his honorary degree.

In the wake of 9/11, the Mahmoods — like millions of practicing American Muslims — became very aware of the sudden growth in antagonism toward Islam.

“There was a lot of negative media,” Ray said, noting that Shaista worried that people might be reluctant to come to their home. But that apprehension diminished with time, and when then-Undersecretary of State for Public Diplomacy Karen Hughes came for a visit, they asked what they could do to relieve tensions between the U.S. and Pakistan. Ray suggested taking a group of Pakistani-Americans to Islamabad (at no cost to the U.S. government) to talk about life in the U.S. and “dispel negative rumors.” Hughes, who worked under President George W. Bush, voiced gratitude, calling the Mahmoods “citizen ambassadors.” The suggestion gave rise to another idea. 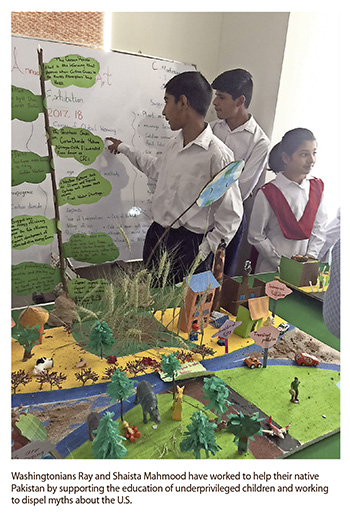 Ray and Shaista, by then American citizens for many years, had never forgotten their origins in Karachi and Lahore, and they quickly decided to take a trip back to Pakistan with a two-fold agenda.

The first item on that agenda was to play a small part in easing the animosity and suspicion between the U.S. and Pakistan by dispelling misconceptions and doing what they did at their Mount Vernon home: diminishing apprehension of the unfamiliar. In the post-9/11 era, being suddenly confronted with someone who looks, talks and worships differently than you had given rise to “the fear factor,” Shaista told us — “the fear of the unknown. If you’ve never met a Muslim, and all you see is the negative news on some TV networks, your opinion is formed by that, rather than what you’ve experienced.”

In Pakistan, they decided to address the same apprehension they had witnessed in the United States, and did so by creating new experiences as “citizen ambassadors” in Islamabad — hosting colleagues, neighbors, politicians and friends just as they had at iftar dinners in the U.S.

The second item on their agenda was realizing that even though they had been living the American dream, most of the rest of the world did not. “Look at these houses that we live in,” said Shaista, with a sweep of her hand at the gated homes along the Potomac shoreline, lamenting that elsewhere in the world “people are living in huts.”

This stark contrast became all the more striking during that early visit to Islamabad where, Shaista recalled, “I couldn’t stop crying when I saw those children — no father, no mother, no family. They could be our kids.” She and Ray saw a chance to put their money to work and tackle the nightmare of children growing up in the streets of Pakistan by becoming financial supporters of the Community School in Islamabad.

Fifteen years later, that support provides meals, clothing, shelter and an education for 120 boys and girls who “get good guidance from the people who work there,” Ray said.

He adds with some satisfaction that “a couple of teachers and administrators have come through these schools as kids and have gone back to teach.” Today’s students, he said, “will all succeed — I have no doubt.” But he and Shaista will be going back to check, just to be sure. “We go every year, and see the children grow from one year to the next,” he said.

The Mahmoods see these tightly focused efforts as part of a larger picture. “We need to let them know that we Americans are helping. Now that we are Americans, we are helping Pakistan — it’s goodwill for the U.S., and these people-to-people connections can make the future.”

Pakistan and the U.S.

As to the future, we asked Ray — who had been ambassador-at-large to the U.S. under Pakistani President Asif Ali Zardari — if he had been in touch with Imran Khan, the recently elected prime minister, about a resumption of those duties or any possibility of a return to politics. Ray and Shaista responded in unison: “No, we don’t want to be in politics.” Looking introspective, Ray said — with Shaista next to him, nodding — “We are U.S. citizens; this is our home.”

That is probably a wise move given the cutthroat nature of Pakistani politics and the perpetual friction between Washington and Islamabad. Despite those well-publicized disputes, Ray insists that the two countries have a good working relationship. People should not lose sight, he said, of the “many times the U.S. and Pakistan have worked together.”

Looking to the future of Khan’s government, Ray said the opposition to the former cricket star’s leadership has been strong and “he’s got a challenge right from the start. He’s been promoting a big agenda, and if he can get half of it done I think that’ll be great.”

Despite the political turbulence, threat of Islamic extremism, poverty and geopolitical rivalries that plague Pakistan, Ray and Shaista have hope for the country and strong ties that bind them to their homeland and its culture, and to their faith. Those same strong ties bind them to the United States and the embrace of values that took root in George Washington’s Mount Vernon farmland centuries ago. They’re living the American dream, with their eyes on the future.

John Lennon is a former Voice of America program director who is retired and lives with his family in Alexandria, Va.